Space law is an area of the law that encompasses national and international law governing activities in outer space. International lawyers have been unable to agree on a uniform definition of the term "outer space", although most lawyers agree that outer space generally begins at the lowest altitude above sea level at which objects can orbit the Earth, approximately 100 km (60 mi) (the Kármán line).

The inception of the field of space law began with the launch of the world's first artificial satellite by the Soviet Union in October 1957. Named Sputnik 1, the satellite was launched as part of the International Geophysical Year. Since that time, space law has evolved and assumed more importance as mankind has increasingly come to use and rely on space-based resources. 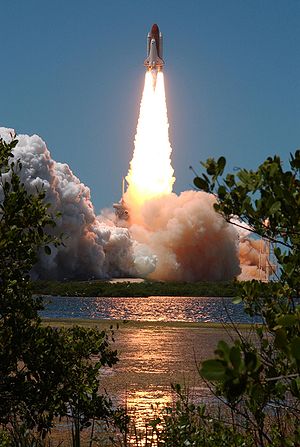 Beginning in 1957, nations began discussing systems to ensure the peaceful use of outer space.[1][2] Bilateral discussions between the United States and USSR in 1958 resulted in the presentation of issues to the UN for debate.[1][3][4] In 1959, the UN created the Committee on the Peaceful Uses of Outer Space (COPUOS).[5] COPUOS in turn created two subcommittees, the Scientific and Technical Subcommittee and the Legal Subcommittee. The COPUOS Legal Subcommittee has been a primary forum for discussion and negotiation of international agreements relating to outer space.

Five international treaties have been negotiated and drafted in the COPUOS :

The outer space treaty is the most widely adopted treaty, with 103 parties.[6] The rescue agreement, the liability convention and the registration convention all elaborate on provisions of the outer space treaty. UN delegates apparently intended[according to whom?] that the moon treaty serve as a new comprehensive treaty which would supersede or supplement the outer space treaty, most notably by elaborating upon the outer space treaty's provisions regarding resource appropriation and prohibition of territorial sovereignty.[7] The moon treaty has only 13 parties however, and many consider it to be a failed treaty due to its limited acceptance.[6] India is the only nation that has both signed the moon treaty and declared itself interested in going to the moon. India has not ratified the treaty; an analysis of India's treaty law is required to understand how this affects India legally.[8]

In addition, the 1963 Treaty Banning Nuclear Weapon Tests in the Atmosphere, in Outer Space, and Under Water ("Partial Test Ban Treaty") banned the testing of nuclear weapons in outer space.

The five treaties and agreements of international space law cover "non-appropriation of outer space by any one country, arms control, the freedom of exploration, liability for damage caused by space objects, the safety and rescue of spacecraft and astronauts, the prevention of harmful interference with space activities and the environment, the notification and registration of space activities, scientific investigation and the exploitation of natural resources in outer space and the settlement of disputes." [9]

All space exploration will be done with good intentions and is equally open to all States that comply with international law. No one nation may claim ownership of outer space or any celestial body. Activities carried out in space must abide by the international law and the nations undergoing these said activities must accept responsibility for the governmental or non-governmental agency involved. Objects launched into space are subject to their nation of belonging, including people. Objects, parts, and components discovered outside the jurisdiction of a nation will be returned upon identification. If a nation launches an object into space, they are responsible for any damages that occur internationally.

Activities of this nature must be transpire in accordance with the sovereign rights of States. Said activities should "promote the free dissemination and mutual exchange of information and knowledge in cultural and scientific fields, assist in educational, social and economic development, particularly in the developing countries, enhance the qualities of life of all peoples and provide recreation with due respect to the political and cultural integrity of States." All States have equal rights to pursue these activities and must maintain responsibility for anything carried out under their boundaries of authority. States planning activities need to contact the Secretary-General of the United Nations with details of the undergoing activities.

Fifteen principles are stated under this category. The basic understanding comes from these descriptions given by the United Nations Office for Outer Space Affairs:
(a) The term "remote sensing" means the sensing of the Earth's surface from space by making use of the properties of electromagnetic waves emitted, reflected or :diffracted by the sensed objects, for the purpose of improving natural resources management, land use and the protection of the environment;
(b) The term "primary data" means those raw data that are acquired by remote sensors borne by a space object and that are transmitted or delivered to the ground :from space by telemetry in the form of electromagnetic signals, by photographic film, magnetic tape or any other means;
(c) The term "processed data" means the products resulting from the processing of the primary data, needed to make such data usable;
(d) The term "analysed information" means the information resulting from the interpretation of processed data, inputs of data and knowledge from other sources;
(e) The term "remote sensing activities" means the operation of remote sensing space systems, primary data collection and storage stations, and activities in :processing, interpreting and disseminating the processed data.[10]

The United Nations Committee on the Peaceful Uses of Outer Space and its Scientific and Technical and Legal Subcommittees operate on the basis of consensus, i.e. all delegations from member States must agree on any matter, be it treaty language before it can be included in the final version of a treaty or new items on Committee/Subcommittee's agendas. One reason that the U.N. space treaties lack definitions and are unclear in other respects, is that it is easier to achieve consensus when language and terms are vague. In recent years, the Legal Subcommittee has been unable to achieve consensus on discussion of a new comprehensive space agreement (the idea of which, though, was proposed just by a few member States). It is also unlikely that the Subcommittee will be able to agree to amend the Outer Space Treaty in the foreseeable future. Many space faring nations seem to believe that discussing a new space agreement or amendment of the Outer Space Treaty would be futile and time consuming, because entrenched differences regarding resource appropriation, property rights and other issues relating to commercial activity make consensus unlikely.

In addition to the international treaties that have been negotiated at the United Nations, the nations participating in the International Space Station have entered into the 1998 Agreement among the governments of Canada, Member States of the European Space Agency, Japan, Russian Federation, and the United States of America concerning cooperation on the Civil International Space Station (the "Space Station Agreement"). This Agreement provides, among other things, that NASA is the lead agency in coordinating the member states' contributions to and activities on the space station, and that each nation has jurisdiction over its own module(s). The Agreement also provides for protection of intellectual property and procedures for criminal prosecution. This Agreement may very well serve as a model for future agreements regarding international cooperation in facilities on the Moon and Mars, where the first off-world colonies and scientific/industrial bases are likely to be established.[11]

Space law also encompasses national laws, and many countries have passed national space legislation in recent years. The Outer Space Treaty requires parties to authorize and supervise national space activities, including the activities of non-governmental entities such as commercial and non-profit organizations. The Outer Space Treaty also incorporates the UN Charter by reference, and requires parties to ensure that activities are conducted in accordance with other forms of international law such as customary international law (the custom and practice of states).

The advent of commercial space activities beyond the scope of the satellite communications industry, and the development of many commercial spaceports, is leading many countries[which?] to consider how to regulate private space activities.[12] The challenge is to regulate these activities in a manner that does not hinder or preclude investment, while still ensuring that commercial activities comply with international law. The developing nations are concerned that the spacefaring nations will monopolize space resources.[12] However this may be resolved by simply extending the United Nations Convention on the Law of the Sea to outer space.[13]

In May 2015, the United States Congress passed the Space Resource Exploration and Utilization Act of 2015.[14][15] 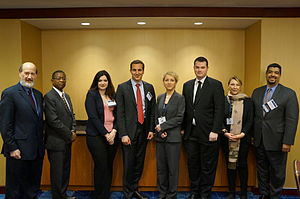 While this field of the law is still in its infancy, it is in an era of rapid change and development. Arguably the resources of space are infinite. If commercial space transportation becomes widely available, with substantially lower launch costs, then all countries will be able to directly reap the benefits of space resources. In that situation, it seems likely that consensus will be much easier to achieve with respect to commercial development and human settlement of outer space. High costs are not the only factor preventing the economic exploitation of space: it is argued that space should be considered as a pristine environment worthy of protection and conservation, and that the legal regime for space should further protect it from being used as a resource for Earth's needs.[19][20] Debate is also focused on whether space should continue to be legally defined as part of the “common heritage of man,” and therefore unavailable for national claims, or whether its legal definition should be changed to allow private property in space.[19][21][22]

Michael Dodge, of Long Beach, Mississippi, is the first law school graduate to receive a space law certificate in the United States.[23][24] Dodge graduated from the National Center for Remote Sensing, Air and Space Law at the University of Mississippi School of Law in 2008.[25][26]

The University of Sunderland is the first UK University to offer a space law module as part of its LLB programme.[citation needed] [27]

In August 2012, students at the University of the Pacific, McGeorge School of Law in Sacramento, California created the McGeorge Society for Space Law and Policy.[citation needed]

NASA's plans to capture an asteroid has raised questions about how space law would be applied in practice.[33]