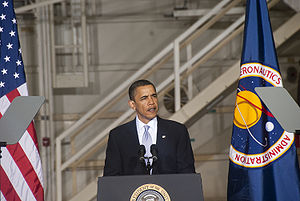 The space policy of the Barack Obama administration was announced by U.S. President Barack Obama on April 15, 2010, at a major space policy speech at Kennedy Space Center.[1] He committed to increasing NASA funding by $6 billion over five years and completing the design of a new heavy-lift launch vehicle by 2015 and to begin construction thereafter. He also predicted a U.S.-crewed orbital Mars mission by the mid-2030s, preceded by an asteroid mission by 2025. In response to concerns over job losses, Obama promised a $40 million effort to help Space Coast workers affected by the cancellation of the Space Shuttle program and Constellation program.

The Obama administration's space policy was made subsequent to the final report of the Review of United States Human Space Flight Plans Committee, which it had instituted to review the human spaceflight plans of the United States in the post-Space Shuttle era. The NASA Authorization Act of 2010, passed on October 11, 2010, enacted many of the Obama administration's space policy goals.

In November 2007, the Obama presidential campaign released a policy document delaying NASA's Constellation program by five years to fund education programs.[2] There was concern that any delay would prolong the gap after the Space Shuttle's retirement, when the US would be dependent on the Russian government for access to the International Space Station. Other presidential candidates, including Hillary Clinton, did not support the delay.[3]

In January 2008, the Obama campaign revised its position, supporting the immediate development of the Crew Exploration Vehicle and the Ares I rocket to narrow the gap. However, the new policy was silent on the heavy lift Ares V rocket and missions beyond low Earth orbit.[4]

Obama gave the first major space policy speech of his campaign in Titusville, Florida in August 2008.[5] He subsequently approved a seven-page space plan that committed to target dates for destinations beyond low Earth orbit:

Obama was noted for "having offered more specifics about his plans for NASA than any U.S. presidential candidate in history".[7]

The Obama administration instituted the Review of United States Human Space Flight Plans Committee, also known as the Augustine Commission, to review the human spaceflight plans of the United States after the time NASA had planned to retire the Space Shuttle. Their goal was to ensure the nation is on "a vigorous and sustainable path to achieving its boldest aspirations in space." The review was announced by the Office of Science and Technology Policy (OSTP) on May 7, 2009.[8][9][10] The report was released on October 22, 2009.[11]

The Committee judged the 9 year old Constellation program to be so behind schedule, underfunded and over budget that meeting any of its goals would not be possible. The President removed the program from the 2010 NASA budget request and a bi-partisan congress refused to fund it any longer, effectively canceling the program. One component of the program, the Orion crew capsule, was added back to plans but as a rescue vehicle to complement the Russian Soyuz in returning Station crews to Earth in the event of an emergency.[12]

In its final report, the Committee proposed three basic options for exploration beyond low Earth orbit, and appeared to favor the third option:

In his April 15, 2010 space policy speech at Kennedy Space Center announcing the administration's plans for NASA, none of the 3 plans outlined in the Committees final report were completely selected.[13] The President rejected immediate plans to return to the Moon on the premise that the current plan had become nonviable. He instead promised $6 billion in additional funding and called for development of a new heavy lift rocket program to be ready for construction by 2015 with crewed missions to Mars orbit by the mid-2030s.[14]

Obama announced the modification of the Orion capsule from its original purpose as a crewed spacecraft for flights to the ISS and the Moon into an emergency escape capsule for the International Space Station, reducing American reliance on the Russian Soyuz spacecraft.

The new policy changes from Vision for Space Exploration and Constellation program Moon-first approach to a variety of destinations resembling the flexible path approach:

Obama promoted the idea of a crewed mission to orbit Mars by the mid-2030s with a landing as a follow-up: 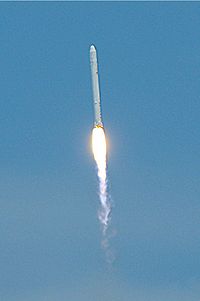 The Falcon 9 rocket Obama referenced in his speech first launched on June 4, 2010.

In a major shift in the function of NASA in American human spaceflight, the Obama administration proposal would rely solely on launch vehicles designed, manufactured, and operated by private aerospace companies, with NASA paying for flights for government astronauts.

Prior to the speech, Obama toured the launch facilities surrounding the SpaceX Falcon 9 launch vehicle with CEO Elon Musk which has received NASA funding through the Commercial Orbital Transportation Services program and could loft NASA astronauts under the new plan. In the speech, Obama referenced the maiden flight of the Falcon 9, which would go on to launch successfully less than one and a half months after the speech:

Obama also announced an extension of funding for International Space Station operations, 90% complete by mass[15] at the time of the speech but scheduled to be deorbited by as early as 2015 before Obama announced the extension, which will provide funding through 2020.

In the speech, Obama announced the development of a new Heavy Lift Vehicle (HLV) to replace the planned Ares V, with the design planned for completion by 2015, two years prior to the Constellation plan, and construction commencing thereafter:

Prior to the speech, SpaceX CEO Elon Musk released a statement praising the proposal and criticizing Senators who had opposed it and former NASA administrator Michael Griffin:

Apollo 11 astronaut Buzz Aldrin released a statement in support of the plan via the White House on February 1, prior to the announcement of the 2011 federal budget, which included the changes Obama announced in the speech:

The NASA Authorization Act of 2010, passed on October 11, 2010, authorized funds for NASA for fiscal year 2011–2013, and enacted many of his stated space policy goals. A total of $58 billion in funding is called for, spread across three years.[22]

The 2011 budget legislation, passed in April 2011, officially terminated the Constellation program. The passage of the budget frees NASA to start working on the new initiatives.[23]

In September 2011, details were announced of the Space Launch System, a Shuttle-Derived Launch Vehicle being developed by NASA as a replacement for the Ares I and Ares V rockets of the Constellation program.

The Obama administration cut NASA's planetary-sciences budget by 20 percent in 2013, as part of a restructuring plan, contrary to the recommendations of the National Research Council.[24]

In January 2014 the Obama administration announced it would seek to extend the operational life of the International Space Station by four more years to 2024.[25]