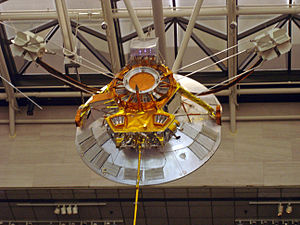 A space probe is a robotic spacecraft that leaves Earth orbit and explores space.[1] It may approach the Moon; enter interplanetary space; flyby, orbit, or land on other planetary bodies; or approach interstellar space.

See List of active Solar System probes for a list of active probes; the space agencies of the USSR (now Russia and Ukraine), the United States, the European Union, Japan, China and India have in the aggregate launched probes to several planets and moons of the Solar System as well as to a number of asteroids and comets. Approximately fifteen missions are currently operational.[2]

Once a probe has left the vicinity of Earth, its trajectory will likely take it along an orbit around the Sun similar to the Earth's orbit. To reach another planet, the simplest practical method is a Hohmann transfer orbit. More complex techniques, such as gravitational slingshots, can be more fuel-efficient, though they may require the probe to spend more time in transit. Some high Delta-V missions (such as those with high inclination changes) can only be performed, within the limits of modern propulsion, using gravitational slingshots. A technique using very little propulsion, but requiring a considerable amount of time, is to follow a trajectory on the Interplanetary Transport Network.[3]

First man-made object to soft land on the Moon, or any other extra terrestrial surface.[4]

First mission to photograph the far side of the Moon, launched in 1959.

First successful in-place analysis of another planet. It may have also been the first space probe to impact the surface of another planet, although it is unclear whether it reached Venus' surface.[5]

The Venera 7 probe was the first spacecraft to successfully soft land on another planet (Venus) and to transmit data from there back to Earth.

Upon its arrival at Mars on November 13, 1971, Mariner 9 became the first space probe to maintain orbit around another planet.[6] 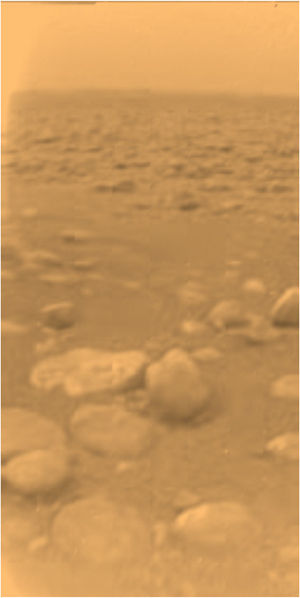 The Huygens landing site on Titan

First soft landing on Mars (between 1960 and 1973).[citation needed] Although, the spacecraft failed shortly after landing.

The Mars Exploration Rovers, Spirit and Opportunity surface and geology, and searched for clues to past water activity on Mars. They were each launched in 2003 and landed in 2004. Communication with Spirit stopped on sol 2210 (March 22, 2010).[8][9] JPL continued to attempt to regain contact until May 24, 2011, when NASA announced that efforts to communicate with the unresponsive rover had ended.[10][11][12] Opportunity arrived at Endeavour crater on 9 August 2011, at a landmark called Spirit Point named after its rover twin, after traversing 13 miles from Victoria crater, over a three-year period.[13] As of January 26, 2016, Opportunity has lasted for more than twelve years on Mars — although the rovers were intended to last only three months.

The first dedicated missions to a comet; in this case, to Halley's Comet during its 1985–86 journey through the inner Solar System. It was also the first massive international coordination of space probes on an interplanetary mission, with probes specifically launched by the Soviet (now Russian) Space Agency, European Space Agency, and Japan's ISAS (now integrated with NASDA to JAXA).

Original a solar observatory in the International Sun-Earth Explorer series, it was sent into solar orbit to make the first close observations of a comet, Comet Giacobini-Zinner, in 1985 as a prelude to studies of Halley's Comet.

Two Russian/French spacecraft. They dropped landers and balloons (first weather balloons deployed on another planet) at Venus before their rendezvous with Halley's Comet.

A second Japanese probe, it made ultraviolet wavelength observations of the comet.[clarification needed]

The first space probe to penetrate a comet's coma and take close-up images of its nucleus.

First probe to land on an asteroid.

First sample return probe to launch from an asteroid.

The Rosetta space probe has flown by two asteroids and is aiming to rendezvous and explore comet 67P/Churyumov-Gerasimenko. It rendezvoused with the comet in November 2014.[14]

First probe to Jupiter. Radio communications were lost with Pioneer 10 on January 23, 2003, because of the loss of electric power for its radio transmitter, with the probe at a distance of 12 billion kilometers (80 AU) from Earth.

First probe to fly by two planets and first probe to Saturn. (Communications were lost due to power constraints and vast distance.)

Voyager 1 is a 733-kilogram probe launched September 5, 1977. It is currently[update] still operational, making it the longest-lasting mission of the U.S. National Aeronautics and Space Administration (NASA). It visited Jupiter and Saturn and was the first probe to provide detailed images of the moons of these planets.

Voyager 1 is the farthest human-made object from Earth, traveling away from both the Earth and the Sun at a relatively faster speed than any other probe.[15] As of September 12, 2013, Voyager 1 is about 12 billion miles from the Sun.[16]

On August 25, 2012, Voyager 1 became the first human made object to enter interstellar space.[17] Voyager 1 has not had a functioning plasma sensor since 1980, but a solar flare in 2012 allowed scientists from NASA to measure vibrations of the plasma surrounding the craft. The vibrations allowed scientists to measure the plasma to be much denser than measurements taken in the far layers of our heliosphere, thus concluding the craft had broken beyond the heliopause.

Voyager 2 was the first probe to complete the Planetary Grand Tour of the gas giants, and the first probe to visit Uranus and Neptune. Voyager 2 is the second-farthest human-made object from Earth, next to Voyager 1 at a distance of 101.2 AU as of July 11, 2013.

Probe sent to orbit Saturn. Significantly expanded our knowledge of the ringed system. Detached a lander to land on Titan on January 14, 2005.[when?]

Beyond the Solar System

Along with Pioneer 10, Pioneer 11, and its sister space probe Voyager 2, Voyager 1 is now an interstellar probe. Voyager 1 and Voyager 2 have both achieved solar escape velocity, meaning that their trajectories will not return them to the Solar System.[21][22]

Image forming systems on space probes typically have a multitude of specifications, but aperture can be useful because it constrains the best diffraction limit and light gathering area.[citation needed]