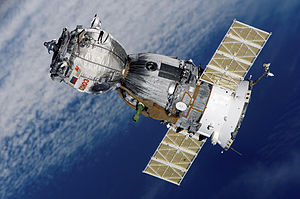 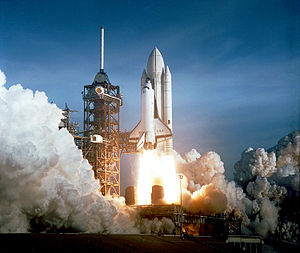 A spacecraft is a vehicle, or machine designed to fly in outer space. Spacecraft are used for a variety of purposes, including communications, earth observation, meteorology, navigation, space colonization, planetary exploration, and transportation of humans and cargo.

On a sub-orbital spaceflight, a spacecraft enters space and then returns to the surface, without having gone into an orbit. For orbital spaceflights, spacecraft enter closed orbits around the Earth or around other celestial bodies. Spacecraft used for human spaceflight carry people on board as crew or passengers from start or on orbit (space stations) only, whereas those used for robotic space missions operate either autonomously or telerobotically. Robotic spacecraft used to support scientific research are space probes. Robotic spacecraft that remain in orbit around a planetary body are artificial satellites. Only a handful of interstellar probes, such as Pioneer 10 and 11, Voyager 1 and 2, and New Horizons, are on trajectories that leave the Solar System.

Orbital spacecraft may be recoverable or not. By method of reentry to Earth they may be divided in non-winged space capsules and winged spaceplanes.

Humanity has achieved space flight but only a few nations have the technology for orbital launches, including: Russia (Roskosmos), the United States (NASA), the member states of the European Space Agency (ESA), Japan (JAXA), India (ISRO), and China (CNSA).

Sputnik was the first artificial satellite. It was launched into an elliptical low Earth orbit by the Soviet Union on 4 October 1957. The launch ushered in new political, military, technological, and scientific developments; while the Sputnik launch was a single event, it marked the start of the Space Age.[1][2] Apart from its value as a technological first, Sputnik also helped to identify the upper atmospheric layer's density, through measuring the satellite's orbital changes. It also provided data on radio-signal distribution in the ionosphere. Pressurized nitrogen in the satellite's false body provided the first opportunity for meteoroid detection. If a meteoroid penetrated the satellite's outer hull, it would be detected by the temperature data sent back to Earth[citation needed]. Sputnik 1 was launched during the International Geophysical Year from Site No.1/5, at the 5th Tyuratam range, in Kazakh SSR (now at the Baikonur Cosmodrome). The satellite travelled at 29,000 kilometers (18,000 mi) per hour, taking 96.2 minutes to complete an orbit, and emitted radio signals at 20.005 and 40.002 MHz

While Sputnik 1 was the first spacecraft to orbit the Earth, other man-made objects had previously reached an altitude of 100 km, which is the height required by the international organization Fédération Aéronautique Internationale to count as a spaceflight. This altitude is called the Kármán line. In particular, in the 1940s there were several test launches of the V-2 rocket, some of which reached altitudes well over 100 km.

Past and present spacecraft 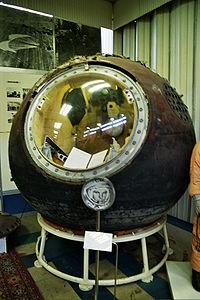 The first manned spacecraft was Vostok 1, which carried Soviet cosmonaut Yuri Gagarin into space in 1961, and completed a full Earth orbit. There were five other manned missions which used a Vostok spacecraft.[3] The second manned spacecraft was named Freedom 7, and it performed a sub-orbital spaceflight in 1961 carrying American astronaut Alan Shepard to an altitude of just over 187 kilometres (116 mi). There were five other manned missions using Mercury spacecraft.

Except for the space shuttle, all of the recoverable manned spacecraft were space capsules.

The International Space Station, manned since November 2000, is a joint venture between Russia, the United States, Canada and several other countries. 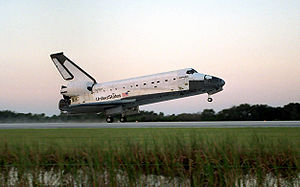 Some reusable vehicles have been designed only for manned spaceflight, and these are often called spaceplanes. The first example of such was the North American X-15 spaceplane, which conducted two manned flights which reached an altitude of over 100 km in the 1960s. The first reusable spacecraft, the X-15, was air-launched on a suborbital trajectory on July 19, 1963.

The first partially reusable orbital spacecraft, a winged non-capsule, the Space Shuttle, was launched by the USA on the 20th anniversary of Yuri Gagarin's flight, on April 12, 1981. During the Shuttle era, six orbiters were built, all of which have flown in the atmosphere and five of which have flown in space. Enterprise was used only for approach and landing tests, launching from the back of a Boeing 747 SCA and gliding to deadstick landings at Edwards AFB, California. The first Space Shuttle to fly into space was Columbia, followed by Challenger, Discovery, Atlantis, and Endeavour. Endeavour was built to replace Challenger when it was lost in January 1986. Columbia broke up during reentry in February 2003.

The first automatic partially reusable spacecraft was the Buran (Snowstorm), launched by the USSR on November 15, 1988, although it made only one flight. This spaceplane was designed for a crew and strongly resembled the U.S. Space Shuttle, although its drop-off boosters used liquid propellants and its main engines were located at the base of what would be the external tank in the American Shuttle. Lack of funding, complicated by the dissolution of the USSR, prevented any further flights of Buran. The Space Shuttle has since been modified to allow for autonomous re-entry in case of necessity.

Per the Vision for Space Exploration, the Space Shuttle was retired in 2011 due mainly to its old age and high cost of program reaching over a billion dollars per flight. The Shuttle's human transport role is to be replaced by the partially reusable Crew Exploration Vehicle (CEV) no later than 2014. The Shuttle's heavy cargo transport role is to be replaced by expendable rockets such as the Evolved Expendable Launch Vehicle (EELV) or a Shuttle Derived Launch Vehicle.

Scaled Composites' SpaceShipOne was a reusable suborbital spaceplane that carried pilots Mike Melvill and Brian Binnie on consecutive flights in 2004 to win the Ansari X Prize. The Spaceship Company will build its successor SpaceShipTwo. A fleet of SpaceShipTwos operated by Virgin Galactic was planned to begin reusable private spaceflight carrying paying passengers in 2014, buy was delayed after the VSS Enterprise crash.

XCOR Aerospace also plans to initiate a suborbital commercial spaceflight service with the Lynx rocketplane through a partnership with RocketShip Tours. First test flights are planned for 2014. 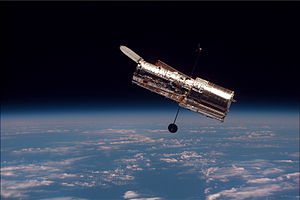 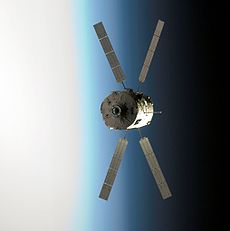 Designed as manned but flown as unmanned only spacecraft 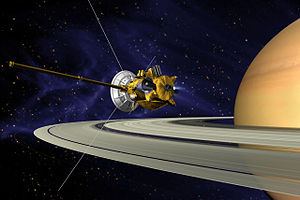 Artist's conception of Cassini–Huygens as it enters Saturn's orbit 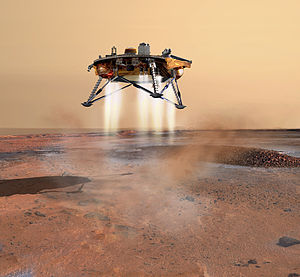 Artist's conception of the Phoenix spacecraft as it lands on Mars

Furthest spacecraft from the Sun 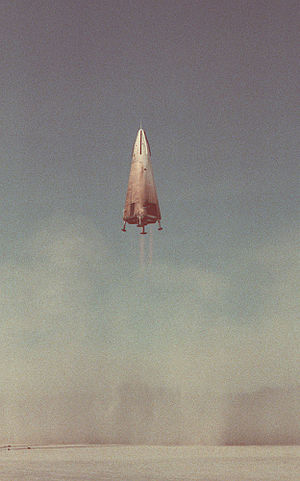 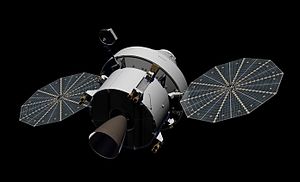 Life support
Spacecraft intended for human spaceflight must also include a life support system for the crew. 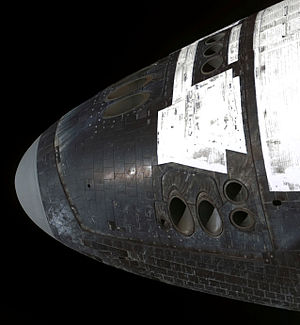 Reaction control system thrusters on the front of the U.S. Space Shuttle

GNC
Guidance refers to the calculation of the commands (usually done by the CDH subsystem) needed to steer the spacecraft where it is desired to be. Navigation means determining a spacecraft's orbital elements or position. Control means adjusting the path of the spacecraft to meet mission requirements. On some missions, GNC and Attitude Control are combined into one subsystem of the spacecraft.[citation needed]

Command and data handling
The CDH subsystem receives commands from the communications subsystem, performs validation and decoding of the commands, and distributes the commands to the appropriate spacecraft subsystems and components. The CDH also receives housekeeping data and science data from the other spacecraft subsystems and components, and packages the data for storage on a data recorder or transmission to the ground via the communications subsystem. Other functions of the CDH include maintaining the spacecraft clock and state-of-health monitoring.

Thermal control
Spacecraft must be engineered to withstand transit through Earth's atmosphere and the space environment. They must operate in a vacuum with temperatures potentially ranging across hundreds of degrees Celsius as well as (if subject to reentry) in the presence of plasmas. Material requirements are such that either high melting temperature, low density materials such as beryllium and reinforced carbon–carbon or (possibly due to the lower thickness requirements despite its high density) tungsten or ablative carbon–carbon composites are used. Depending on mission profile, spacecraft may also need to operate on the surface of another planetary body. The thermal control subsystem can be passive, dependent on the selection of materials with specific radiative properties. Active thermal control makes use of electrical heaters and certain actuators such as louvers to control temperature ranges of equipments within specific ranges.

Structures
Spacecraft must be engineered to withstand launch loads imparted by the launch vehicle, and must have a point of attachment for all the other subsystems. Depending on mission profile, the structural subsystem might need to withstand loads imparted by entry into the atmosphere of another planetary body, and landing on the surface of another planetary body.

Payload
The payload depends on the mission of the spacecraft, and is typically regarded as the part of the spacecraft "that pays the bills". Typical payloads could include scientific instruments (cameras, telescopes, or particle detectors, for example), cargo, or a human crew.