From Infogalactic: the planetary knowledge core
(Redirected from Spanish Criollo peoples)
Jump to: navigation, search
For other uses, see Criollo.

The Criollo (Spanish pronunciation: [ˈkɾjoʎo] or "creole" people) were a social class in the caste system of the overseas colonies established by Spain in the 16th century, especially in Hispanic America, comprising the locally born people of confirmed European (primarily Spanish) ancestry.[1]

The Criollo class ranked below that of the Iberian Peninsulares, the high-born (yet class of commoners) permanent resident colonists born in Spain. But Criollos were higher status/rank than all other castes — people of mixed descent, Amerindians, and enslaved Africans. According to the casta system, a Criollo could have up to 1/8 (one great-grandparent or equivalent) Amerindian ancestry and not lose social place (see Limpieza de sangre).[2] In the 18th and early 19th centuries, changes in the Spanish Empire's policies towards her colonies (and their polyglot of peoples) led to tensions between the Criollos and the Peninsulares.[citation needed] The growth of local Criollo political and economic strength in their separate colonies coupled with their global geographic distribution, and led them to each evolve a separate (both from each other and Spain) organic national personality and viewpoint. Criollos were the main supporters of the Spanish American wars of independence.[citation needed]

The term criollo is not to be confused with the English/French creole. The word "creole" is applied to many ethnic groups around the world who have no historic connection to Spain or to any colonial system. Indeed, many of those creole peoples were never a distinct social caste, and were never defined in terms of racial purity concepts.

The word criollo and its Portuguese cognate crioulo are believed to come from the Spanish/Portuguese verb criar, meaning "to breed" or "to raise". Originally the term was meant to distinguish the members of any foreign ethnic group who were born and "raised" locally, from those born in the group's homeland, as well as from persons of mixed ethnic ancestry. Thus, in the Portuguese colonies of Africa, português crioulo was a locally born white person of Portuguese descent; in the Americas, negro criollo or negro crioulo was a locally born person of pure black ancestry. In Spanish colonies, an español criollo was an ethnic Spaniard who had been born in the colonies, as opposed to an español peninsular born in Spain.[3] Whites in colonial Brazil, born in the Iberian Peninsula, were known as mazombos.

Limpieza de sangre or "cleanness of blood" was a legal concept in use since the Spanish Reconquista, and introduced to the Spanish colonies in the Americas. In 15th century Spain, the concept was used to distinguish old Christians of "pure" unmixed Iberian Christian ancestry (either Southern Spanish Mozarabs or Christians from the northern kingdoms of Spain) from new Christians descending from converted Moriscos (Iberian Muslims) and Sephardim (Iberian Jews), together known as conversos (converts), whose real allegiance was institutionally distrusted.

The English word "creole" was a loan from French créole, which in turn is believed to come from Spanish criollo or Portuguese crioulo.

In theory, Criollo status was attained by people of mixed origin who had one-eighth or less (the equivalent of a great grandparent) Amerindian ancestry, although in some cases individuals had much more. Such cases might include the offspring of a Castizo parent and one Peninsular or Criollo parent.[2] This one-eighth rule, also in theory, did not apply to African admixture. In reality, officials assigned various racial categories to mix-raced people depending on their social status, what they were told or due to testimony from friends and neighbors.

To preserve the Spanish Crown's power in the colonies, the Spanish colonial society was based on an elaborate caste system, which related to a person's degree of descent from Spaniards. The highest-ranking castes were the españoles, Spaniards by birth or descent. The Peninsulares were the persons born in Spain, while the Criollo comprised locally born people of proven unmixed Spanish ancestry, that is, the Americas-born child of two Spanish-born Spaniards or mainland Spaniards (peninsulares), of two Criollos, or a Spaniard and a Criollo.[citation needed] People of mixed ancestry were classified in other castes — such as castizos, mestizos, cholos, mulatos, indios, zambos, and enslaved Africans, called blacks.

While the casta system was in force, the top ecclesiastical, military and administrative positions were reserved for crown-appointed Peninsulares, most of the local land-owning elite and nobility belonged to the Criollo caste.

Poole argues that the Virgin Mary, especially as Our Lady of Guadalupe, became the chief religious devotion of the criollos. They used the story to legitimize their own social position and infuse it with an almost messianic sense of mission and identity.[4]

Criollos and the wars of independence 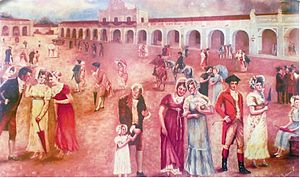 Guatemalan Criollos rejoice upon learning about the declaration of independence from Spain on September 15, 1821.
Main article: Spanish American wars of independence

Until 1760, the Spanish colonies were ruled under laws designed by the Spanish Habsburgs, which granted the American provinces great autonomy. That situation changed by the Bourbon Reforms during the reign of Charles III. Spain needed to extract increasing wealth from its colonies to support the European and global wars it needed to maintain the Spanish Empire. The Crown expanded the privileges of the Peninsulares, who took over many administrative offices which had been filled by Criollos. At the same time, reforms by the Catholic Church reduced the roles and privileges of the lower ranks of the clergy, who were mostly Criollos.[citation needed]

By the 19th century, this discriminatory policy of the Spanish Crown and the examples of the American and French revolutions, led the Criollos to rebel against the Peninsulares. With increasing support of the other castes, they engaged Spain in a fight for independence (1809–1826). The former Spanish Empire in the Americas separated into a number of independent republics.

The word criollo retains its original meaning in most Spanish-speaking countries in the Americas. In some countries, however, the word criollo has over time come to have additional meanings, such as "local" or "home grown". For instance, comida criolla in Spanish-speaking countries refers to "local cuisine", not "cuisine of the criollos". In Portuguese, "crioulo" is also a racist slang term referring to Blacks.[5][6]

In some countries, the term is also used to describe people from particular regions, such as the countryside or mountain areas:

As the United States expanded westward, it annexed lands with a long-established population of Spanish-speaking settlers, who were overwhelmingly or exclusively of white Spanish ancestry (cf. White Mexican). This group became known as Hispanos. Prior to incorporation into the United States (and briefly, into Independent Texas), Hispanos had enjoyed a privileged status in the society of New Spain, and later in post-colonial Mexico.

Regional subgroups of Hispanos were named for their geographic location in the so-called "internal provinces" of New Spain:

Another group of Hispanos, the Isleños ("Islanders"), are named after their geographic origin in the Old World, namely the Canary Islands. In the US today, this group is primarily associated with the state of Louisiana.