From Infogalactic: the planetary knowledge core
Jump to: navigation, search
Not to be confused with Spanish Lady or Lady of Spain. 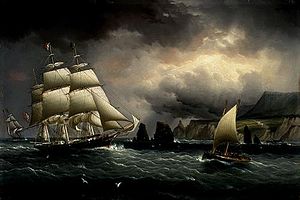 "Spanish Ladies" is a traditional British naval song, describing a voyage from Spain to the Downs from the viewpoint of ratings of the Royal Navy.

A ballad by the name "Spanish Ladies" was registered in the English Stationer's Company on December 14, 1624.[1] The oldest mention of the present song does not appear until the 1796 logbook of HMS Nellie,[verification needed] however, making it more likely a Napoleonic era invention.[1] The timing of the mention in the Nellie's logbook suggests that the song was created during the First Coalition (1793–96), when the British navy carried supplies to Spain to aid its resistance to revolutionary France. It probably gained in popularity during the later Peninsular War when British soldiers were transported throughout the Iberian peninsula to assist rebels fighting against their French occupation. After their defeat of the Grande Armée, these soldiers were returned to Britain but forbidden to bring their Spanish wives, lovers, and children with them.[2]

The song predates the proper emergence of the sea shanty. Shanties were the work songs of merchant sailors, rather than naval ones. However, in his 1840 Poor Jack, Captain Frederick Marryat reports that the song "Spanish Ladies"—though once very popular—was "now almost forgotten" and he included it in whole in order to "rescue it from oblivion".[3] The emergence of shanties in the mid-19th century then revived its fortunes[4] to the point where it is now sometimes included as a "borrowed song" within the genre.[5]

"Spanish Ladies" is the story of British navy men sailing north from Spain and along the English Channel. There is apparently a fog, as the crew are unable to determine their latitude by sighting. Instead, they console themselves with the sandy bottom they've sounded and the width of the entrance between the rocks of Ushant to the south and the Scillys to the north. The succession of headlands on the English shore suggests a ship tacking up-channel away from the French coast, identifying a new landmark on each tack.[6]

This is the version recorded in the 1840 Poor Jack.[3] It is one of many. Notable variations are shown in parentheses after each line.

So the first land we made, it is called the Deadman, (alt: "The first land we sighted was callèd the Dodman")
Next Ram Head, off Plymouth, Start, Portland, and the Wight; (alt: "Next Rame Head off Plymouth, Start, Portland, and Wight;")
We sailèd by Beachy, (alt: "We sailed by Beachy / by Fairlight and Dover")
By Fairly and Dungeness,
And then bore away for the South Foreland light. (alt: "Until we brought to for..." or "And then we bore up for...")

Now the signal it was made for the grand fleet to anchor (alt: "Then the signal was made...")
All in the Downs that night for to meet; (alt: "...that night for to lie;")
Then stand by your stoppers, (alt: "Let go your shank painter, / Let go your cat stopper")
See clear your shank painters,
Hawl all your clew garnets, stick out tacks and sheets. (alt: "Haul up your clewgarnets, let tack and sheets fly")

The song has been found in several different minor and major keys.[9] Cecil Sharp considers the version in minor keys to be the original.[10]

Several variants exist that utilize the same melody but substitute different lyrics. The one sung in Jaws reset the destination from England to Boston. "Brisbane Ladies" is an Australian tune about drovers instead of sailors; a significantly modified version called "The Ryans and the Pittmans", widely known as "We'll Rant and We'll Roar", is from Newfoundland; and there is an American variant called "Yankee Whalermen". A version was created especially for the Bluenose, a famed Canadian ship based in Nova Scotia.

The melody is also used for the "Streets of Laredo", a 19th-century American cowboy ballad, and the song forms part of Sir Henry J. Wood's composition Fantasia on British Sea Songs.

As mentioned above, the song is quoted in full in the 1840 novel Poor Jack.[3] It appears in part in the 40th chapter of Herman Melville's Moby-Dick and in Treason's Harbour, the 9th book in Patrick O'Brian's Aubrey–Maturin series of novels set during the Napoleonic Wars. It also appears in Arthur Ransome's Swallows and Amazons and Wilbur Smith's works Monsoon and Blue Horizon.

The song notably appeared in the 1975 film Jaws. It was also sung in the 2003 film Master and Commander: The Far Side of the World, based on the O'Brian books. In the 2007 film Pirates of the Caribbean: At World's End, Captain Teague (Keith Richards) plays an acoustic version of the song.

The video game Assassin's Creed IV: Black Flag features "Spanish Ladies" as one of the collectible sea shanties that the sailors on the player's ship may begin singing while sailing between islands while out of combat.