From Infogalactic: the planetary knowledge core
Jump to: navigation, search
For the song by Foals, see Spanish Sahara (song).

Spanish Sahara (Spanish: Sáhara Español; Arabic: الصحراء الإسبانية‎‎ Al-Sahrā'a Al-Isbānīyah) was the name used for the modern territory of Western Sahara when it was occupied and ruled as a territory by Spain between 1884 and 1975. It had been one of the most recent acquisitions of the Spanish Empire, as well as one of its last remaining holdings, which had once extended from the Americas to the Philippines and East Asia.

Spain gave up its Saharan possession following Moroccan demands and international pressure, mainly from United Nations resolutions regarding decolonisation. There was internal pressure from the native Sahrawi population and the claims of Morocco. Mauritania also claimed the territory for a number of years based on its history, and then dropped all claims. In 1975 Morocco occupied much of the country, but the Polisario Front, promoting sovereignty of an independent Sahrawi Arab Democratic Republic (SADR), fought a guerrilla resistance for 16 years against Morocco. In 1991 the UN negotiated a ceasefire, and has tried to arrange negotiations and a referendum to let the population vote on its future. Morocco controls the entire Atlantic coast and most of the landmass, population, and natural resources of Western Sahara.

Before and during the Spanish occupation (1884–1975), the territory was inhabited by Saharan Berbers who lived in many oases and coastal villages. They worked mainly in fishing and camel herding. They speak the Berber and Hassaniya languages. There is some dispute and ambiguity about whether the territory was under Moroccan royal sovereignty at the time when the Spanish claimed it in 1884.

While the Berlin Conference, whereat the European powers were establishing the rules for setting up zones of influence or protection in Africa, was ongoing, Spain declared "a protectorate of the African coast" from Cape Blanc to Cape Bojador on 26 December 1884. It officially informed the other powers in writing on 14 January 1885.[1] It began establishing trading posts and a military presence. In July 1885, the king appointed Emilio Bonelli commissioner of the Río de Oro with civil and military authority. On 6 April 1887, it was incorporated into the Captaincy General of the Canary Islands for military purposes.[1] In the summer of 1886, under the sponsorship of the Spanish Society of Commercial Geography (Sociedad Española de Geografía Comercial), Julio Cervera Baviera, Felipe Rizzo (1823–1908) and Francisco Quiroga (1853–1894) traversed the colony, which was called Río de Oro, and made topographical and astronomical observations. At the time, geographers had not mapped the territory and its features were not widely known. Their trek is considered the first scientific expedition in that part of the Sahara.[2] In 1886, Spain signed the Treaty of Idjil by which the emirate of Adrar ceded the land of the colony to Spain. This treaty was of no legal value, since the emir of Adrar had no claim to the territory, but since Morocco had no claim either (at least since the Hispano-Moroccan Treaty of 1767), the Spanish "invented" a claim which Adrar could, with no harm to itself, immediately cede away.[1]

The borders of the territory were not clearly defined until treaties between Spain and France in the early 20th century. Spanish Sahara was created from the Spanish territories of Río de Oro and Saguia el-Hamra in 1924. It was not part of the areas known as Spanish Morocco and was administered separately from them.

On entering the territory in 1884, Spain was immediately challenged by stiff resistance from the indigenous Sahrawi tribes. A 1904 rebellion led by the powerful Smara-based marabout, Shaykh Ma al-'Aynayn, was put down by France in 1910, which ruled neighboring Algeria. This was followed by a wave of uprisings under Ma al-Aynayn's sons, grandsons and other political leaders. 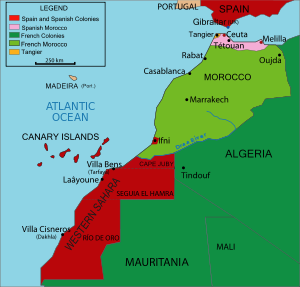 Spanish and French protectorates in Morocco, 1912.

Tribal uprisings meant that Spain found it difficult to control parts of the territory's large hinterland until 1934. After gaining independence in 1956, Morocco laid claim on Spanish Sahara as part of its historic pre-colonial territory. In 1957, the Moroccan Army of Liberation nearly occupied the small territory of Sidi-Ifni, north of Spanish Sahara, during the Ifni War. The Spanish sent a regiment of paratroopers from the nearby Canary Islands and were able to repel the attacks. With the assistance of the French,[citation needed] Spain soon re-established control in the area (Operaciones Teide-Ecoubillon - see http://www.portierramaryaire.com/foro/viewtopic.php?p=79371 - in Spanish).

It tried to suppress resistance politically. It forced some of the previously nomadic inhabitants of Spanish Sahara to settle in certain areas, and the rate of urbanization was increased. In the same year, Spain united the territories of Saguia el Hamra and Río de Oro to form the province of Spanish Sahara, while ceding the provinces of Tarfaya and Tantan (Cape Juby strip) to Morocco.

In 1967, Spanish rule was challenged by the Harakat Tahrir, a protest movement secretly organized by the Moroccan government. Spain suppressed the 1970 Zemla Intifada.

In 1973, the Polisario Front was formed in a revival of militant Sahrawi nationalism. The Front's guerrilla army grew rapidly, and Spain lost effective control over most of the territory by early 1975.

Its effort to found a political rival, the Partido de Unión Nacional Saharaui (PUNS), met with little success. Spain proceeded to co-opt tribal leaders by setting up the Djema'a, a political institution loosely based on traditional Sahrawi tribal leaders. The Djema'a members were hand-picked by the authorities, but given privileges in return for rubber-stamping Madrid's decisions.[citation needed]

In the winter of 1975, just before the death of its long-time leader Francisco Franco, Spain was confronted with an intensive campaign of territorial demands from Morocco and, to a lesser extent, from Mauritania, that culminated in the Marcha Verde ("Green March"). After negotiating the Madrid Accords with Morocco and Mauritania, Spain withdrew its forces and settlers from the territory.

Morocco and Mauritania took control of the region. Mauritania later surrendered its claim after fighting an unsuccessful war against the Polisario Front. Morocco began fighting against the Polisario Front; after sixteen years, the UN negotiated a cease-fire in 1991. Today, the sovereignty of the territory remains under dispute. Morocco has resisted allowing a referendum to be held, and has continued to offer its people jobs in controlled territory.

UN peace efforts have been directed at holding a referendum on independence among the Sahrawi population, but this has not yet taken place. The African Union and at least 81 governments consider the territory to be the sovereign (albeit occupied) state of the Sahrawi Arab Democratic Republic (SADR), with a government-in-exile backed by the Polisario Front.