listen)), is a centre-left social-democratic[7] and federalist[4][dubious – discuss] political party in Spain.

The party, under Felipe González, formed a majority government after its victory in the 1982 election which lasted until 1993, after which it formed a minority government until 1996. PSOE has had strong ties with the General Union of Workers (UGT), a Spanish trade union. For decades, UGT membership was a requirement for PSOE membership. However, since the 1980s, UGT has frequently criticized the economic policies of PSOE, even calling for a general strike on 14 December 1988.[8]

PSOE was founded with the purpose of representing and defending the interests of the working class formed during the Industrial Revolution in the 19th century.[citation needed] In its beginnings, PSOE's main objective was the defence of worker's rights and the achievement of the ideals of socialism, emerging from contemporary philosophy and Marxist politics, by securing political power for the [working class] and socialising the means of production in order to establish a dictatorship of the proletariat in the transition to socialist society.

The ideology of the Spanish Socialist Worker's Party has evolved throughout the 20th Century according to relevant historical events and the evolution of Spanish society.

In 1979 the party abandoned its definitive Marxist theses at the hands of its then secretary general Felipe González, not before overcoming great tensions and two congresses, the first of which preferred to maintain Marxism. Before this situation, notable internal leaders like Pablo Castellano or Luis Gómez Llorente founded the internal faction of Left Socialists, which included the militants who would not renounce Marxism. This allowed for the consolidation of the leftist forces in PSOE. From this moment, the diverse events both outside and within the party led to projects that resembled those of other European social democratic parties and acceptance of the defence of the market economy.

Currently, PSOE defines itself as "social democratic, centre-left and progressive". Concerning the territorial model of the Spanish State, PSOE supports an asymmetric federalism.[9] It is grouped with other self-styled socialists, social democrats and labour parties in the Party of European Socialists. 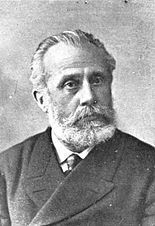 Pablo Iglesias founded the party back in 1879. 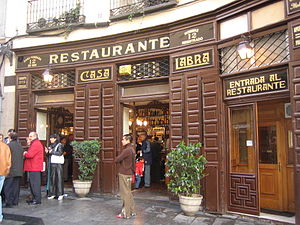 PSOE was founded on 2 May 1879 in the Casa Labra Pub (city of Madrid) by the historical Spanish workers' leader Pablo Iglesias.[8] The first program of the new political party was passed in an assembly of 40 people, on 20 July of that same year. Although PSOE was rather weak during the late 19th century, its active participation in strikes from 1899 to 1902 and especially its electoral coalition with the main Republican parties led in 1910 to the election of Pablo Iglesias as the first Socialist representative in the Spanish Cortes.

The party was a member of the Labour and Socialist International between 1923 and 1940.[10]

PSOE formed part of the Spanish Government during the Second Spanish Republic and as part of the Spanish Popular Front, elected to government in February 1936. During the civil war years, PSOE was divided into three wings: a leftist revolutionary Marxist wing, led by Francisco Largo Caballero that advocated dictatorship of the proletariat, nationalization of every industry, and total redistribution of land; a moderate, social-democratic faction, led by Indalecio Prieto; and a reformist one, led by Julian Besteiro.[11]

The dictator Francisco Franco banned PSOE in 1939, and the party was legalized again in 1977. During Franco's rule members of PSOE were persecuted, with many leaders, members and supporters being imprisoned or exiled and even executed.

Its 25th Congress was held in Toulouse in August 1972. In 1974 at its 26th Congress in Suresnes, Felipe González was elected Secretary General, replacing Rodolfo Llopis Ferrándiz. González was from the "reform" wing of the party, and his victory signaled a defeat for the historic and veteran wing of the Party. The direction of the party shifted from the exiles to the young people in Spain who hadn't fought the war.[8]

Llopis led a schism to form the Spanish Socialist Workers' Party (historic) González showed intentions to move the party away from its Marxist and socialist background, turning PSOE into a social-democratic party, similar to those of the rest of western Europe. In 1977 PSOE became the unofficial opposition leading party with 29.2% of the vote and 118 seats in the Parliament (which until then it had been the Communists, leading more aggressively among a larger representation of underground parties since the last free popular vote during the Civil War on Republican territory) in what was still a pluralistic party election but heading towards a de facto two-party system. Their standing was further boosted in 1978 when the 6 deputies of the Popular Socialist Party agreed to merge with the party.

In their 27th congress in May 1979 González resigned because the party would not abandon its Marxist character. In September the extraordinary 28th congress was called in which González was re-elected when the party agreed to move away from Marxism. European social-democratic parties supported González's stand, and the Social Democratic Party of Germany granted them money. PSOE party symbol was changed from the anvil with the book to the social-democratic rose in the fist, as used by the French Socialist Party. In the referendum of 1978, PSOE supported the Spanish Constitution, which was approved. In the 1979 Spanish general election PSOE gained 30.5% of the vote and 121 seats, remaining the main opposition party.

Though the party had opposed NATO, after reaching the government most party leaders supported keeping Spain inside the organisation. The González administration organised a referendum on the question in 1986, calling for a favourable vote, and won. The administration was criticised for avoiding the official names of North Atlantic Treaty Organisation and NATO, using the unofficial Atlantic Alliance terms. A symbol of this U-turn is Javier Solana who campaigned against NATO but ended up years later as its Secretary General. 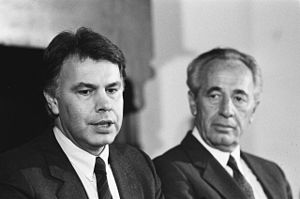 Felipe González was the Spanish Prime Minister from 1982 to 1996.

Economic crisis and state terrorism (GAL) against the violent separatist group ETA eroded the popularity of Felipe González, and in 1996, PSOE lost the elections to the conservative People's Party (PP). Between 1996 and 2001 PSOE weathered a crisis, with Gonzalez resigning in 1997. PSOE suffered a heavy defeat in 2000 (34.7%).

PSOE remained as the ruling party in the autonomous communities of Andalusia, Extremadura, Castilla-La Mancha and Asturias.

PSOE strongly opposed the Iraq War, which was supported by the PP. 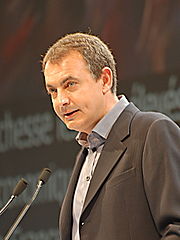 On 13 November 2003 PSOE (Socialists' Party of Catalonia, PSC) increased its vote total but scored second in the regional election in Catalonia, after Convergence and Union. After a period of negotiations, the party formed a pact with Republican Left of Catalonia, Initiative for Catalonia Greens and the United and Alternative Left, and have governed in Catalonia since then.

On 14 March 2004, PSOE won the 2004 Spanish general election with almost 43% of the votes, following the 11-M terrorist (11 March) attacks, and maintained their lead in the elections to the European Parliament.

In 2005, PSOE called for a Yes vote on the European Constitution. PSOE also favoured the negotiations between the government and ETA during the 2006 cease-fire, which had a de facto end with the Barajas Airport terrorist attack.

On 9 March 2008 PSOE won the 2008 general elections again with José Luis Rodríguez Zapatero remaining Prime Minister of Spain. The Socialists increased their share of seats in the Congress of Deputies from 164 to 169 after the latest election.

However, after waning popularity throughout their second term, mainly due to their handling of the worsening economic climate in Spain in the aftermath of the 2008 Global Financial Crisis, PSOE were defeated in the general elections of November 2011 by the conservative People's Party.[citation needed] Shortly after, an extraordinary congress was held, in which Alfredo Pérez Rubalcaba, former Deputy to Zapatero and Minister of the Interior, was elected Secretary General defeating Carme Chacón, the other candidate, who stood for the Zapatero platform. This victory caused huge internal divisions and weakened the party's external image.

In 2013, PSOE held a political conference which introduced a completely new platform, widely seen as a move to the left in a desperate attempt to steal votes from parties such as United Left, whose popularity rose steadily due to the general discontent with the two-party system and spending cuts. That platform was the basis for the European Parliament election manifesto, promoted as a solid alternative to the conservative plan for Europe. The expectations inside the party, which chose Elena Valenciano as their election candidate, were really optimistic; however, the social democrats suffered another huge defeat due to the appearance of new parties such as Podemos which managed to gain the support of left-wing voters; PSOE won 14 seats. Shortly thereafter, Rubalcaba resigned as Secretary General and an Extraordinary Congress was convoked. This congress was the first to use a primary election system with three candidates: Pedro Sánchez, Eduardo Madina and José Antonio Pérez-Tapias. Pedro Sánchez was elected with 49 percent of the vote of the affiliates and therefore became Secretary General on 27 July.

In 2015 municipal elections were held, where the PSOE won 25% of the vote, one of its worst results in the history of democracy, together with the fall of the Popular Party, which won 27% of votes, it meant the end of the two-party system in Spain in favor of new parties. The PSOE lost 943 councilors but passes govern 2-7 communities through pacts left.

On 20 December, the general election was held, which produced a parliament broken into four major parties. PSOE, due to the large increase for parties like Podemos (far left) and Citizens (center), got about 20% of the vote, its worst result since democracy was restored.

Congress of Deputies and Senate