Spanish conquest of the Chibchan Nations

Spanish conquest of the Chibchan Nations refers to the conquest by the Spanish monarchy of the Chibcha language-speaking nations, mainly the Muisca and Taironas that inhabited present-day Colombia, beginning the Spanish colonization of the Americas.[1]

The first inhabitants of Colombia were migrating members of the Mesoamericans who established themselves in the area c. 1200 BC followed by two other waves c. 500 BC and a third one between 400 and 300 BC. Later on the group of Arawaks coming from southern South America made presence in the area, and a third wave of migrating groups, the warring Caribs established in the lower lands and pushed the Mesoamericans to the mountains. The southern areas of present-day Colombia were also part of the Inca Empire.[2]

There were two main tribes that were socially and economically developed at the time of the Spanish arrival: the Muisca, and the Taironas. Both were within the Chibchan Nations.

By the 16th century, the Chibchas, were divided into two main groups: the Muisca, located in the plateaus of Cundinamarca and Boyacá, and the Tairona, who settled along the northern spur of the Sierra Nevada de Santa Marta in the present-day La Guajira Department.

The Muisca inhabited the area of what is now the Departments of Boyacá and Cundinamarca high plateau mainly (Altiplano Cundiboyacense) where today is located the city of Bogotá, Colombia´s capital. The Muisca were organized in the Muisca Confederation, divided into two territories: Hunza, whose sovereign was the zaque and Bacatá, whose sovereign was the zipa. They farmed maize, potato, quinoa and cotton, among others. Skilled in goldsmiths, bartered emeralds, blankets, ceramic handicrafts, coca and salt actively trading these with neighboring nations. 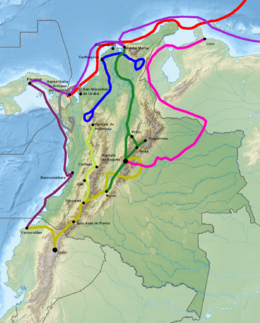 The territory was discovered by Spanish explorer Alonso de Ojeda in 1499,[3] though he never landed. A short time later, Juan de la Cosa, another Spanish explorer, landed on what is today called Cabo de la Vela (Cape of Sails) in the Guajira Peninsula.[4]

In 1502, on another coast of present-day Colombia near the Gulf of Urabá, Spanish explorers led by Vasco Núñez de Balboa explored and conquered the area near the Atrato River. There they founded Santa María la Antigua del Darién (c. 1509) and the now-vanished town of San Sebastian de Urabá (c. 1508-1510), the first two European settlements on the mainland of the Americas.[5]

At July 29 of 1525 the city of Santa Marta was founded in the northern coast of Colombia by the Spanish conqueror Rodrigo de Bastidas.

In 1536 was the Spanish conqueror Gonzalo Jiménez de Quesada who led an expedition with 600 Spanish soldiers and 85 horses, left Santa Marta and arrived to the Muisca territory later the same year.

Among the villages of Suesca and Nemocón the De Quesada expedition faced the first attempt of Muisca active resistance: the Muisca zipa Tisquesusa, made a failed effort to oust the invaders, who then gave the first show of their military superiority.

Later, De Quesada, in Bogota´s savannah was harassed continuously by Tisquesusa's subjects, but managed to take advantage of rivalries among various indigenous chiefs to go weakening the power of the zipa of Bacatá. The chiefs of Chía and Suba were among the first to submit and collaborate with the Spanish, while men of Tisquesusa suffered defeat after defeat and failed to oppose the Spaniards, who had horses, dogs and metal weapons, rather than primitive wooden weapons: spears, clubs and darts thrown with shuttles. Tisquesusa continued to harass and attack the Spaniards, but in some obscure skirmish, late 1537, he died, without the Spaniards know immediately and without knowing anything of his treasure.[6]

Tisquesusa's successor, his nephew Sagipa (Saquesazipa) underwent soon to the Spaniards. Soon the relations between the Spanish and Sagipa deteriorated. Those eager to locate the lost treasure of the zipa apprehended Sagipa and subjected to trial, accusing him of rebellion against the Spaniards and refusing to reveal the site where the fabulous treasure was hidden.

Tundama was another chief who had appeared ready to fight. This bellicose leader called his subjects and requested the assistance of neighboring caciques from Serinza, so when De Quesada came, he found the most ordered troops and more martial aspect to here they had been among Muisca, formed by steps in different bodies, all festooned with feathers of different colors. In this battle, called Bonsa, indigenous forces opposed a desperate resistance. The Spanish general De Quesada was in danger of losing his life by falling from his horse in the midst of enemies, but at last, broke the Indians and trampled by horses, were Bonsa marshes stained with indigenous blood.[7]

Finally on August 6th, 1538 the city of Bogotá (named originally Santa Fé de Bogotá) was founded on the remains of the original southern Muisca capital Bacatá.