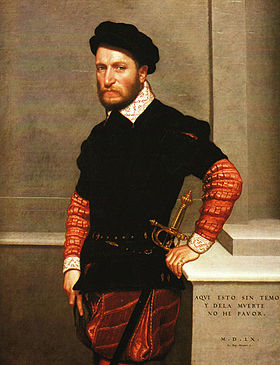 Portrait of a Spanish Noble at the height of their Empire. D. Gabriel de la Cueva

Spanish nobles are persons who possess the legal status of hereditary nobility according to the laws and traditions of the Spanish monarchy. A system of titles and honours of Spain and of the former kingdoms that constitute it comprise the Spanish nobility. Some nobles possess various titles that may be inherited, but the creation and recognition of titles is legally a prerogative of the King of Spain.

Some noble titles and families still exist which have transmitted that status since time immemorial. Some aristocratic families use the nobiliary particle de before their family name. During the rule of General Francisco Franco, some new hereditary titles were conceded to individuals, and the titles granted by the Carlist pretenders were officially recognized.

Despite accession to Spain's throne of Juan Carlos I in 1975, the court of nobles holding positions and offices attached to the royal household was not restored. Noble titleholders are subjected to taxation, whereas under Spain's ancien régime they were exempt. King Juan Carlos resumed conferral of titles to recognize those whose public service, artistic endeavour, personal achievement, philanthropy, etc. are deemed to have benefitted the Spanish nation.

Spanish nobles are classified as either Grandee of Spain (Grandes de España), as titled nobles, or as untitled nobles.

In the past, grandees were divided into first, second, and third classes, but this division has ceased to be relevant in practice while remaining a titular distinction; legally all grandees enjoy the same privileges in modern times. At one time however, each class held special privileges such as:

Additionally, all grandees were addressed by the king as mi Primo (my Cousin), whereas ordinary nobles were only qualified as mi Pariente (my Kinsman).

A grandee of any rank outranks a non-grandee, even if that non-grandee's title is of a higher degree, with the exception of official members of the Spanish Royal family who may in fact hold no title at all. Thus, a baron-grandee enjoys higher precedence than a marquis who is not a grandee.

Since 1987 the children of an Infante of Spain, traditionally considered part of the royal family, have been entitled to the rank and style of a grandee but do not hold the legal dignity of grandee unless a grandeza is officially conferred by the sovereign; once the dignity has been officially bestowed, it becomes hereditary.

Dukes and other individuals who are grandees are entitled to the honorific style of The Most Excellent Lord/Lady or His/Her Excellency.

Titled nobles (without a grandeeship) who are of the rank of marquis or count use the style of The Most Illustrious Lord/Lady. Those who hold a title with the rank of viscount, baron or Señor use simply Señor/Señora.

The ordinary Spanish nobility is divided into six ranks. From highest to lowest, these are: Duque (Duke), Marqués (Marquis), Conde (Count), Vizconde (Viscount), Barón (Baron), and Señor (Lord) (as well as the feminine forms of these titles).

Nobility descends from the first man of a family who was raised to the nobility (or recognized as belonging to the hereditary nobility) to all his legitimate descendants, male and female, in the male line. Thus, most persons who are legally noble, hold no noble title. Hereditary titles formerly descended by male-preference primogeniture, a woman being eligible to inherit only if she had no brother or if her brothers also inherited titles. However, by Spanish law, all hereditary titles descend by absolute primogeniture, gender no longer being a criterion for preference in inheritance, since 2005.

The often overlooked title of Prince (Príncipe/Princesa) has historically been borne by those who have been granted or have inherited that title. It is often not included in lists of the Spanish nobility because it is rare. Prince/Princess are English translations of Infante/Infanta, referring to the son or daughter of a king; such titles are reserved for members of the royal family (the heir to the throne or the consort of the Queen regnant). Historically, infante or infanta could refer to offspring, siblings, uncles and aunts of a king. The heir's princely titles derive from the ancient kingdoms which united to form Spain.

Three titles of prince are held by the heir to the Spanish throne.

Other titles of prince were frequently granted by the kings of Spain, but usually in their capacity as Kings of Naples or of Sicily. Such nobles often sojourned at the Spanish court where their titles were acknowledged, but rarely were Spanish nobles the recipients of a title of prince in Spain. The most notable exception was the title "Prince of the Peace" conferred on Manuel Godoy, a favourite of the Spanish king and, especially, of the queen.

Although legislation of the twentieth century ended official recognition of the title of prince outside the royal family, it did allow the holder of a princedom to have the dignity converted to a ducal title of the same name.[citation needed]

All dukedoms are attached to a grandeeship. A partial list includes:

The title of Señor is, together with that of Conde, the oldest in seniority of the Spanish realms. Many of these lordships are among the oldest titles of nobility in Spain, and the Señor usually exercised military and administrative powers over the lordship. Although some lordships were created by the kings of Spain, others existed before them and have not been created by any known king. For example, the Señor of Biscay held a great degree of independence from the king of Castile, to whom he could pledge or not pledge feudal allegiance, but of whom he was not automatically a vassal: each new lord of Biscay had to renew his oath to the king. Ultimately however, the kings of Castile inherited the lordship.

Lower nobility held ranks, without individual titles, such as infanzon (in Aragon, e.g. Latas Family), hidalgo or escudero. These did not, however, correspond to the status of a baron, a title unknown to Spanish nobility except in Catalonia.

Hidalgo was the most common of these: Originally all the nobles in the Western Peninsular Christian Realms were hidalgos and, as cristianos viejos, held nearly exclusive right to privileged status (although there were some Jews and Muslims recognized as hidalgos, who shared their privilege to bear arms as knights in the mesnada real). The first of the kings of Pamplona and Asturias were originally elected and lifted up on a shield to assume Princeps inter Pares status, by these otherwise untitled nobles. For approximately three hundred years the hidalgos retained this privilege, only a few of them eventually being granted the non-heritable title of Comes#Medieval usages. Unlike Spain's later titled nobles, the early hidalgo did not necessarily possess or receive any fief or land grant. Many were as poor as commoners, although they were tax-exempt and could join the civil service or the army.

During the Middle Ages hidalgo became a title granted by the kings of Castile as a reward for service done to the crown (or, as in Biscay, as a way of recognizing prior rights). In the same way escudero was granted for military achievement when the Reconquista ended. Being the most obvious proof of noble descent, hidalgo came to be the only lesser title to remain among the modern ranks of Spanish nobility. From this ancient estate of the realm emerged Spain's nobility. All titled and untitled nobles are considered hidalgos, but many of the modern titled nobility do not descend from the original hidalguía.

The term Hidalgo de Sangre indicated membership in a family whose noble status was recognized in the earliest records of its existence; thus its immemorial nobility was acknowledged but not created by any monarch.

The evidence supporting one's claim to a title may be reviewed by the Deputation of Grandees and Titled Nobles of the Kingdom (Diputación de Grandes y Títulos del Reino). The body includes eight grandees, eight nobles who are not grandees, and a president who must hold both a grandeeship and a hereditary title unattached to a grandeeship.

Succession to Spanish noble titles is hereditary, but not automatic. The original letters patent which created the title determine the order of succession. Payment of substantial fees is required whenever a title is inherited.

While noble titles historically have followed the rule of male-preference primogeniture, a Spanish law came into effect on October 30, 2006, after approval by both houses of the Cortes, establishing the inheritance of hereditary noble titles by the firstborn regardless of gender. The law is retroactive to July 27, 2005.[1]

Following the death of a noble, the senior heir may petition the sovereign through the Spanish Ministry of Justice for permission to use the title. If the senior heir does not make a petition within two years, then other potential heirs may do so on their own behalf. There is a limit of forty years from the vacancy by death or relinquishment of a title within which that title may be claimed and revived by an heir.

The petitioner must demonstrate that he or she is a child, grandchild or direct male line descendant of a noble (whether a grandee or not), or that he or she belongs to certain bodies or orders of chivalry deemed noble, or that the father's family is recognized as noble (if succeeding to a grandeeship, the mother's family also). The amount of fees due depend on whether the title is attached to a grandeeship or not, and on whether the heir is a direct descendant or a collateral kinsman of the previous holder. The petition is normally granted, except if the petitioner is a criminal.

The late Cayetana Fitz-James Stuart, 18th Duchess of Alba (d. 20 November, 2014) holds the Guinness Book of Records for number of titles with over 50 titles. Before her death, the Duchess ceded some of her titles to each of her six children; otherwise, all but the eldest would have been excluded from succession.

Titles created during the reign of King Juan Carlos I

Since the beginning of his reign in 1975, King Juan Carlos has created new titles for about 51 people (as of April 2011),[2] among others recognizing the merits of politicians and artists. Some of these dignities have been hereditary. Examples include

King Juan Carlos also exceptionally confirmed the title of Count of Barcelona, a title historically attached to the Crown, but used as a title of pretence by his father Juan de Borbón during the dynasty's 20th century exile and the subsequent reign of his son.