From Infogalactic: the planetary knowledge core
Jump to: navigation, search
For other uses, see Spartacus (disambiguation).
Not to be confused with Spartocus.

Spartacus (Greek: Σπάρτακος Spártakos; Latin: Spartacus;[1] c. 111–71 BC) was a Thracian gladiator who, along with the Gauls Crixus, Oenomaus, Castus and Gannicus, was one of the escaped slave leaders in the Third Servile War, a major slave uprising against the Roman Republic. Little is known about Spartacus beyond the events of the war, and surviving historical accounts are sometimes contradictory and may not always be reliable. However, all sources agree that he was a former gladiator and an accomplished military leader.

This rebellion, interpreted by some as an example of oppressed people fighting for their freedom against a slave-owning oligarchy, has provided inspiration for many political thinkers, and has been featured in literature, television, and film. Although this is not contradicted by classical historians, no historical account mentions that the goal was to end slavery in the Republic, nor do any of the actions of the rebel leaders, who themselves committed numerous atrocities, seem specifically aimed at ending slavery.[2] 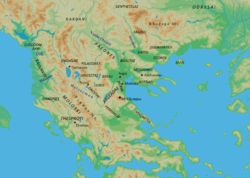 Balkan tribes, including the Maedi.

The Greek essayist Plutarch describes Spartacus as "a Thracian of Nomadic stock",[3] in a possible reference to the Maedi tribe.[4] Appian says he was "a Thracian by birth, who had once served as a soldier with the Romans, but had since been a prisoner and sold for a gladiator".[5]

Florus (2.8.8) described him as one "who, from a Thracian mercenary, had become a Roman soldier, that had deserted and became enslaved, and afterward, from consideration of his strength, a gladiator".[6] The authors refer to the Thracian tribe of the Maedi,[7][8][9] which occupied the area on the southwestern fringes of Thrace, along its border with the Roman province of Macedonia - present day south-western Bulgaria.[10] Plutarch also writes that Spartacus' wife, a prophetess of the Maedi tribe, was enslaved with him.

The name Spartacus is otherwise attested in the Black Sea region. Kings of the Thracian dynasty of the Cimmerian Bosporus[11] and Pontus[12] are known to have borne it, and a Thracian "Sparta" "Spardacus"[13] or "Sparadokos",[14] father of Seuthes I of the Odrysae, is also known.

The extent of the Roman Republic at 100 BC.

According to the differing sources and their interpretation, Spartacus either was an auxiliary from the Roman legions later condemned to slavery, or a captive taken by the legions.[15] Spartacus was trained at the gladiatorial school (ludus) near Capua belonging to Lentulus Batiatus. He was a heavyweight gladiator called a murmillo. These fighters carried a big oblong shield (scutum), and used a sword with a broad, straight blade (gladius), about 18 inches long.[16] In 73 BC, Spartacus was among a group of gladiators plotting an escape.[17]

About 70[18] slaves were part of the plot. Though few in number, they seized kitchen utensils, fought their way free from the school, and seized several wagons of gladiatorial weapons and armor.[17] The escaped slaves defeated a small force sent after them, plundered the region surrounding Capua, recruited many other slaves into their ranks, and eventually retired to a more defensible position on Mount Vesuvius.[19][20]

Once free, the escaped gladiators chose Spartacus and two Gallic slaves—Crixus and Oenomaus—as their leaders. Although Roman authors assumed that the escaped slaves were a homogeneous group with Spartacus as their leader, they may have projected their own hierarchical view of military leadership onto the spontaneous organization, reducing other slave leaders to subordinate positions in their accounts. The positions of Crixus and Oenomaus—and later, Gannicus and Castus—cannot be clearly determined from the sources.[citation needed]

For more details on this topic, see Third Servile War. 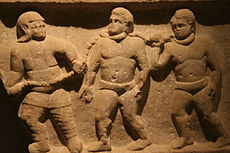 The response of the Romans was hampered by the absence of the Roman legions, which were already engaged in fighting a revolt in Hispania and the Third Mithridatic War. Furthermore, the Romans considered the rebellion more of a policing matter than a war. Rome dispatched militia under the command of praetor Gaius Claudius Glaber, which besieged Spartacus and his camp on Mount Vesuvius, hoping that starvation would force Spartacus to surrender. They were surprised when Spartacus, who had made ropes from vines, climbed down the cliff side of the volcano with his men and attacked the unfortified Roman camp in the rear, killing most of them.[21]

The rebels also defeated a second expedition, nearly capturing the praetor commander, killing his lieutenants and seizing the military equipment.[22] With these successes, more and more slaves flocked to the Spartacan forces, as did "many of the herdsmen and shepherds of the region", swelling their ranks to some 70,000.[23]

In these altercations Spartacus proved to be an excellent tactician, suggesting that he may have had previous military experience. Though the rebels lacked military training, they displayed a skillful use of available local materials and unusual tactics when facing the disciplined Roman armies.[24] They spent the winter of 73–72 BC training, arming and equipping their new recruits, and expanding their raiding territory to include the towns of Nola, Nuceria, Thurii and Metapontum.[25] The distance between these locations and the subsequent events indicate that the slaves operated in two groups commanded by the remaining leaders Spartacus and Crixus.[citation needed]

In the spring of 72 BC, the rebels left their winter encampments and began to move northward. At the same time, the Roman Senate, alarmed by the defeat of the praetorian forces, dispatched a pair of consular legions under the command of Lucius Gellius Publicola and Gnaeus Cornelius Lentulus Clodianus.[26] The two legions were initially successful—defeating a group of 30,000 rebels commanded by Crixus near Mount Garganus[27]—but then were defeated by Spartacus. These defeats are depicted in divergent ways by the two most comprehensive (extant) histories of the war by Appian and Plutarch.[28][29][30][31]

Alarmed by the apparently unstoppable rebellion, the Senate charged Marcus Licinius Crassus, the wealthiest man in Rome and the only volunteer for the position,[32] with ending the rebellion. Crassus was put in charge of eight legions, approximately 40,000 trained Roman soldiers,[33][not in citation given][34] which he treated with harsh, even brutal, discipline, reviving the punishment of unit decimation.[32] When Spartacus and his followers, who for unclear reasons had retreated to the south of Italy, moved northward again in early 71 BC, Crassus deployed six of his legions on the borders of the region and detached his legate Mummius with two legions to maneuver behind Spartacus. Though ordered not to engage the rebels, Mummius attacked at a seemingly opportune moment but was routed.[35] After this, Crassus' legions were victorious in several engagements, forcing Spartacus farther south through Lucania as Crassus gained the upper hand. By the end of 71 BC, Spartacus was encamped in Rhegium (Reggio Calabria), near the Strait of Messina. 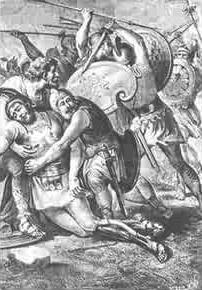 The Fall of Spartacus

According to Plutarch, Spartacus made a bargain with Cilician pirates to transport him and some 2,000 of his men to Sicily, where he intended to incite a slave revolt and gather reinforcements. However, he was betrayed by the pirates, who took payment and then abandoned the rebels.[35] Minor sources mention that there were some attempts at raft and shipbuilding by the rebels as a means to escape, but that Crassus took unspecified measures to ensure the rebels could not cross to Sicily, and their efforts were abandoned.[36] Spartacus' forces then retreated toward Rhegium. Crassus' legions followed and upon arrival built fortifications across the isthmus at Rhegium,[citation needed] despite harassing raids from the rebels. The rebels were now under siege and cut off from their supplies.[37]

At this time, the legions of Pompey returned from Hispania and were ordered by the Senate to head south to aid Crassus.[38] While Crassus feared that Pompey's arrival would cost him the credit, Spartacus unsuccessfully tried to reach an agreement with Crassus.[39] When Crassus refused, a portion of Spartacus' forces fled toward the mountains west of Petelia (modern Strongoli) in Bruttium, with Crassus' legions in pursuit.[40]

When the legions managed to catch a portion of the rebels separated from the main army,[41] discipline among Spartacus' forces broke down as small groups were independently attacking the oncoming legions.[42] Spartacus now turned his forces around and brought his entire strength to bear on the legions in a last stand, in which the rebels were routed completely, with the vast majority of them being killed on the battlefield.[43]

The final battle that saw the assumed defeat of Spartacus in 71 BC took place on the present territory of Senerchia on the right bank of the river Sale in the area that includes the border with Oliveto Citra up to those of Calabritto, near the village of Quaglietta, in High Sele Valley, which at that time was part of Lucania. In this area, since 1899, there have been finds of armour and swords of the Roman era.

Plutarch, Appian and Florus all claim that Spartacus died during the battle, but Appian also reports that his body was never found.[44] Six thousand survivors of the revolt captured by the legions of Crassus were crucified, lining the Appian Way from Rome to Capua.[45]

Crassus crucified 6,000 of Spartacus' followers on the road between Rome and Capua. 1878 painting by Fedor Andreevich Bronnikov

Classical historians were divided as to what the motives of Spartacus were. None of Spartacus' actions overtly suggest that he aimed at reforming Roman society or abolishing slavery.

Plutarch writes that Spartacus wished to escape north into Cisalpine Gaul and disperse his men back to their homes.[46] If escaping the Italian peninsula was indeed his goal, it is not clear why Spartacus turned south after defeating the legions commanded by the consuls Lucius Publicola and Gnaeus Clodianus, which left his force a clear passage over the Alps.

Appian and Florus write that he intended to march on Rome itself.[47] Appian also states that he later abandoned that goal, which might have been no more than a reflection of Roman fears.

Based on the events in late 73 BC and early 72 BC, which suggest independently operating groups of escaped slaves[48] and a statement by Plutarch, it appears that some of the escaped slaves preferred to plunder Italy, rather than escape over the Alps.[46][clarification needed] 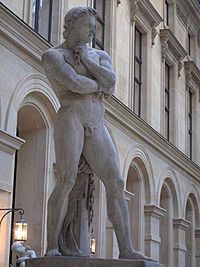 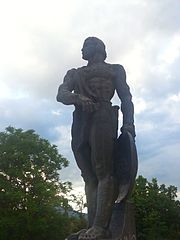 The statue of Spartacus in Sandanski, Bulgaria.