Spatial disorientation, spatial unawareness is the inability of a person to correctly determine his/her body position in space. This phenomenon refers especially to aircraft pilots and underwater divers,[1] but can be also induced in normal conditions — chemically or physically (e.g. by blindfolding). In aviation, the term means the inability to correctly interpret aircraft attitude, altitude or airspeed, in relation to the Earth or point of reference, especially after a reference point (e.g., the horizon) has been lost. Spatial disorientation is a condition in which an aircraft pilot's perception of direction does not agree with reality. While it can be brought on by disturbances or disease within the vestibular system, it is more typically a temporary condition resulting from flight into poor weather conditions with low or no visibility. Under these conditions the pilot may be deprived of an external visual horizon, which is critical to maintaining a correct sense of up and down while flying.

A pilot who enters such conditions will quickly lose spatial orientation if there has been no training in flying with reference to instruments. Approximately 80% of the private pilots in the United States do not have an instrument rating, and therefore are prohibited from flying in conditions where instrument skills are required. Not all pilots abide by this rule and approximately 40% of the NTSB fatal general aviation accident reports list continuation of flight into conditions for which the pilot was not qualified as a cause.

During the abnormal acceleratory environment of flight, the vestibular and proprioceptive systems do not respond vertically. Because of inertial forces created by acceleration of the aircraft along with centrifugal force caused by turning, the net gravitoinertial force sensed primarily by the otolith organs is not aligned with gravity, leading to perceptual misjudgment of the vertical. In addition, the inner ear contains rotational "accelerometers," known as the semicircular canals, which provide information to the lower brain on rotational accelerations in the pitch, roll and yaw axes. However, prolonged rotation (beyond 15-20 s) results in a cessation of semicircular output, and cessation of rotation thereafter can even result in the perception of motion in the opposite direction. Under ideal visual conditions the above illusions are unlikely to be perceived, but at night or in weather the visual inputs are no longer capable of overriding these illusory nonvisual sensations. In many cases, illusory visual inputs such as a sloping cloud deck can also lead to misjudgments of the vertical and of speed and distance or even combine with the nonvisual ones to produce an even more powerful illusion. The result of these various visual and nonvisual illusions is spatial disorientation.[2]

Once an aircraft enters conditions under which the pilot cannot see a distinct visual horizon, the drift in the inner ear continues uncorrected. Errors in the perceived rate of turn about any axis can build up at a rate of 0.2 to 0.3 degrees per second. If the pilot is not proficient in the use of gyroscopic flight instruments, these errors will build up to a point that control of the aircraft is lost, usually in a steep, diving turn known as a graveyard spiral. During the entire time, leading up to and well into the maneuver, the pilot remains unaware that he is turning, believing that he is maintaining straight flight.

The graveyard spiral usually terminates when the g-forces on the aircraft build up to and exceed the structural strength of the airframe, resulting in catastrophic failure, or when the aircraft contacts the ground. In a 1954 study (180 - Degree Turn Experiment), the University of Illinois Institute of Aviation[3] found that 19 out of 20 non-instrument-rated subject pilots went into a graveyard spiral soon after entering simulated instrument conditions. The 20th pilot also lost control of his aircraft, but in another maneuver. The average time between onset of instrument conditions and loss of control was 178 seconds.

Spatial disorientation can also affect instrument-rated pilots in certain conditions. A powerful tumbling sensation (vertigo) can be set up if the pilot moves his head too much during instrument flight. This is called the Coriolis illusion. Pilots are also susceptible to spatial disorientation during night flight over featureless terrain.

Good spatial orientation on the ground relies on the use of visual, vestibular (organs of equilibrium located in the inner ear), and proprioceptive (receptors located in the skin, muscles, tendons, and joints) sensory information. Changes in linear acceleration, angular acceleration, and gravity are detected by the vestibular system and the proprioceptive receptors, and then compared in the brain with visual information.

Spatial-D and G-induced loss of consciousness (GLOC) are two of the most common causes of death from human factors in military aviation.[4] Spatial orientation in flight is difficult to achieve because numerous sensory stimuli (visual, vestibular, and proprioceptive) vary in magnitude, direction, and frequency. Any differences or discrepancies between visual, vestibular, and proprioceptive sensory inputs result in a sensory mismatch that can produce illusions and lead to spatial disorientation. 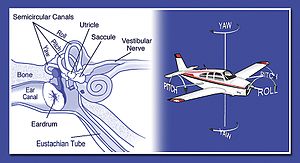 Inner ear with semicircular canals shown, likening them to the roll, pitch and yaw axis of an aircraft

The otolith organs and orientation

Two otolith organs, the saccule and utricle, are located in each ear and are set at right angles to each other. The utricle detects changes in linear acceleration in the horizontal plane, while the saccule detects gravity changes in the vertical plane. However, the inertial forces resulting from linear accelerations cannot be distinguished from the force of gravity (according to the equivalence principle of general relativity they are the same thing) therefore, gravity can also produce stimulation of the utricle and saccule. A response of this type will occur during a vertical take-off in a helicopter or following the sudden opening of a parachute after a free fall.

Anyone in an aircraft that is making a coordinated turn, no matter how steep, will have little or no sensation of being tilted in the air unless the horizon is visible. Similarly, it is possible to gradually climb or descend without a noticeable change in pressure against the seat. In some aircraft, it is possible to execute a loop without pulling negative G so that, without visual reference, the pilot could be upside down without being aware of it.[citation needed] This is because a gradual change in any direction of movement may not be strong enough to activate the fluid in the vestibular system, so the pilot may not realize that the aircraft is accelerating, decelerating, or banking.

Information from the following government documents is in the public domain.