Spectravideo, or SVI, was a U.S. computer company founded in 1981 as "SpectraVision" by Harry Fox. They originally made video games for Atari 2600 and VIC-20. Some of their computers were MSX-compliant or IBM PC compatible. They ceased operations in 1988.[1]

The SV-318 featured an unusual combination of arrow keys and joystick. 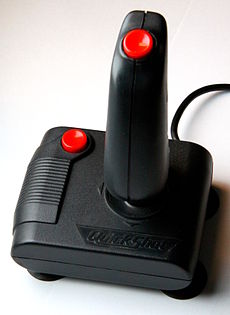 SpectraVision was founded in 1981 by Harry Fox and Alex Weiss as a distributor of computer games, contracting external developers to write the software. Their main products were gaming cartridges for the Atari 2600 VCS, Colecovision and Commodore VIC-20. They also made the world's first ergonomic joystick, the Quickshot. In late 1982 the company was renamed to Spectravideo due to a naming conflict with OnCommand's Hotel TV system called SpectraVision.[1]

In the early 1980s, the company developed 11 games for the Atari 2600, including several titles of some rarity: Chase the Chuckwagon, Mangia and Bumper Bash.[2] A few of their titles were only available through the Columbia House music club.[3]

The company's first attempt at a computer was an add-on for the Atari 2600 called the Spectravideo CompuMate, with a membrane keyboard and very simple programmability.

Their first real computers were the SV-318 and SV-328, released in 1983. Both were powered by a Z80 A at 3.6 MHz, but differed in the amount of RAM (SV-318 had 32KB and SV-328 had 80KB total, of which 16KB was reserved for video) and keyboard style. The main operating system, residing in ROM, was a version of Microsoft Extended BASIC, but if the computer was equipped with a floppy drive, the user had the option to boot with CP/M instead. These two computers were precedent to MSX and not fully compatible with the standard, though the changes made to their design to create MSX were minor. The system had a wide range of optional hardware, for example an adapter making it possible to run ColecoVision games on the SVI.

A later version, the Spectravideo SVI-728 was made MSX compatible.

The last computer produced by Spectravideo was the SVI-838 (also known as Spectravideo X'Press 16). It was a PC and MSX2 in the same device. 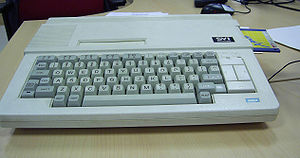 The SVI-738, a portable MSX computer.

Today the Spectravideo name is used by a UK-based company called SpectraVideo Plc, formerly known as Ash & Newman. That company was founded in 1977, and bought the Spectravideo brand name from Bondwell (SVI owner) in 1988. They sell their own range of Logic3 branded products, and do not have any connection to the old Spectravideo products.[1]