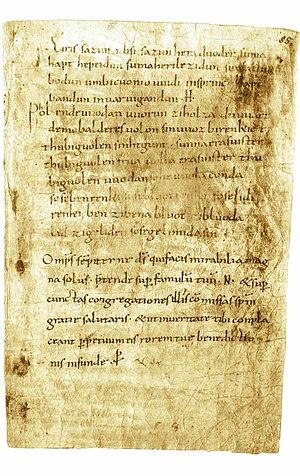 Manuscript with the Merseburg Incantations.

A spell, charm or hex is a set of words, spoken or unspoken, which are considered by its user to invoke some magical effect. Historical attestations exist for the use of some variety of incantations in many cultures around the world. Binding a person with a spell by the use of spoken word formulas is known as an incantation, and involves the use of evocation.

Surviving written records of whole magic spells were largely obliterated in many cultures by the success of the major monotheistic religions, Islam, Judaism and Christianity, which label some magic activity as immoral or associated with evil. Spells would generally be distinguished from magic symbols, words, patterns, recipes, practices and other forms of magic that were not directly exercised by a collection of words. However, some spells were combinations or repetitions of words that were considered to have magic power, but which were not in sentences or verse.

Surviving examples from northern Europe include For a Swarm of Bees, the Nine Herbs Charm and the Merseburg Incantations.

Due to the surviving written record of ancient Egyptian culture, a number of references to magic and complete examples exist. In particular the embalming and interring process involved the use of many documented spells, for example from the Book of the Dead.

The performance of magic almost always involves the use of language. Whether spoken out loud or unspoken, words are frequently used to access or guide magical power. In "The Magical Power of Words" (1968) S. J. Tambiah argues that the connection between language and magic is due to a belief in the inherent ability of words to influence the universe. Bronisław Malinowski, in Coral Gardens and their Magic (1935), suggests that this belief is an extension of man's basic use of language to describe his surroundings, in which "the knowledge of the right words, appropriate phrases and the more highly developed forms of speech, gives man a power over and above his own limited field of personal action."[2] Magical speech is therefore a ritual act and is of equal or even greater importance to the performance of magic than non-verbal acts.[3]

Not all speech is considered magical. Only certain words and phrases or words spoken in a specific context are considered to have magical power.[4] Magical language, according to C. K. Ogden and I. A. Richards's (1923) categories of speech, is distinct from scientific language because it is emotive and it converts words into symbols for emotions; whereas in scientific language words are tied to specific meanings and refer to an objective external reality.[5] Magical language is therefore particularly adept at constructing metaphors that establish symbols and link magical rituals to the world.[6]

Malinowski argues that "the language of magic is sacred, set and used for an entirely different purpose to that of ordinary life."[7] The two forms of language are differentiated through word choice, grammar, style, or by the use of specific phrases or forms: prayers, spells, songs, blessings, or chants, for example. Sacred modes of language often employ archaic words and forms in an attempt to invoke the purity or "truth" of a religious or a cultural "golden age". The use of Hebrew in Judaism is an example.[8] Another potential source of the power of words is their secrecy and exclusivity. Much sacred language is differentiated enough from common language that it is incomprehensible to the majority of the population and it can only be used and interpreted by specialized practitioners (magicians, priests, shamans, even mullahs).[9][10] In this respect, Tambiah argues that magical languages violate the primary function of language: communication.[11] Yet adherents of magic are still able to use and to value the magical function of words by believing in the inherent power of the words themselves and in the meaning that they must provide for those who do understand them. This leads Tambiah to conclude that "the remarkable disjunction between sacred and profane language which exists as a general fact is not necessarily linked to the need to embody sacred words in an exclusive language."[8]