From Infogalactic: the planetary knowledge core
Jump to: navigation, search
For the episode of Psych, see Spellingg Bee. 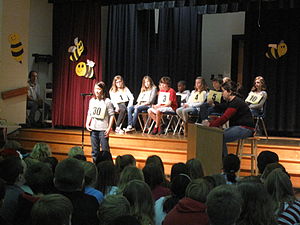 A spelling bee at an elementary school, with a speller addressing an audience and a judge, with a table of contestants behind them

A spelling bee (also sometimes a "Spelling B"[1][2][3]) is a competition in which contestants are asked to spell a broad selection of words, usually with a varying degree of difficulty. The concept is thought to have originated in the United States,[4] and spelling bee events, along with variants, are now also held in some other countries around the world. The first winner of an official spelling bee was Frank Neuhauser, who won the 1st National Spelling Bee in Washington, D.C. in 1925 at age eleven.[5][6]

Historically the word bee has been used to describe a get-together where a specific action is being carried out, like a husking bee, a quilting bee, or an apple bee. Its etymology is unclear but possibly derived from the Old English word bēn, meaning prayer.[7][8] 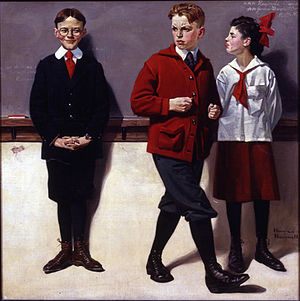 The earliest known evidence of the phrase spelling bee in print dates back to 1850, although an earlier name, spelling match, has been traced back to 1808.[9] A key impetus for the contests was Noah Webster's spelling books. First published in 1786 and known colloquially as "The Blue-backed Speller," Webster's spelling books were an essential part of the curriculum of all elementary school children in the United States for five generations. Now the key reference for the contests is the Merriam-Webster unabridged dictionary.

In the United States, spelling bees are annually held from local levels up to the level of the Scripps National Spelling Bee which awards a cash prize to the winner. The National Spelling Bee is sponsored by English-language newspapers and educational foundations; it is also broadcast on ESPN. Since 2006, the National Spelling Bee's championship rounds have been broadcast on ABC live. In 2005, contestants came from the Bahamas, Jamaica, Guam, the U.S. Virgin Islands, American Samoa, Canada, New Zealand, Puerto Rico and a German military base, as well as the United States. This was the first year that spellers from Canada and New Zealand attended the competition. The final authority for words is the Merriam-Webster unabridged dictionary, the Webster's Third New International Dictionary. The annual study list is available from Scripps, either online or in print.

Spelling bees are typically in English as other languages have much more regular spelling.[10]

In other regions, countries and communities

In Asia, a spelling bee is being conducted up to the international level by MaRRS Spelling Bee. The competition involves learning the correct spelling of words, their use in sentences and in multiple contexts.[11] Currently, it is being held in India, Abu Dhabi, Ajman, Bahrain, Dubai, Fujairah, Ras-al-Khaima, Sharjah, and Umm-Al-Quwain.[12] Also in Bahrain, an annual spelling bee contest named Spellbound Bahrain is conducted for the school children by KEEN4, an association of Kerala Engineers.

In Taiwan, the National Spelling Bee Championship is a contest held by Bugstation.tv for young English learners. Thousands of young applicants join this contest each year. Another organisation that promotes the love of the English language is Horizons Unlimited, which in 2011 organized an India Spelling Bee contest for children in the southern state of Kerala in India.

In Africa, spelling bee is promoted by a company Gift People Limited, which currently organizes the Annual National Spelling Bee contest for children between the age of 7 and 14 in Egypt. This effort commenced in 2008 when the first National finals was held in Cairo. It is popularly referred to as SPELLIT! in Kenya at a school called Rusinga, their annual spelling bee contest is between the team houses. There is one called St. John, St. Luke, St. Mathew and St.Mark.

In Western Australia, a spelling bee is held by the State Library Foundation of Western Australia, for children in school years 5, 6, 7 and 8. The early stages of the competition are held online, and the final spell-off in front of a live audience.[13] Two major prizes are awarded: one for a Junior Winner (Years 5-6) and the other for a Senior Winner (Years 7-8). Further prizes are given to the teacher and school class of each major prize winner, and to the most improved speller each week.[14]

Bangladesh's most renowned English daily, the Daily Star and Champs21.com, is organizing (as of March 2012) a televised spelling bee for students from Bengali and English medium backgrounds, who compete through an online system with the winners making it through to the television show. The competition is the first such arrangement in rapidly developing Bangladesh. The champion will be rewarded with five hundred thousands and a trip to Washington, the city of spelling bee. Now Bangladeshi students are having a spelling revolution. Because of such initiative, the curiosity of learning English has spread out in the whole country.

It should not be confused with another organization, calling itself the Spelling Bee of Canada, which started in 1987 in Toronto, Ontario, and is now celebrating its 25th anniversary, and hosting a Canadian Invitational Bee in 2012, as well as organizing Provincial Bees across Canada, and the world.

In the school year 2008-2009, Mrs. Wijdan Alawadhi (senior teacher) and Mrs. Mona Yehia (teacher of English) started the spelling bee contest in Mubarak al-Kabir Educational Area (one of the biggest Kuwaiti Governorates). They started the contest as an experiment contest in their school (Thabet Bin Zaid Primary School for Boys) with the fourth and fifth grades. It was a successful experiment which was faced with a lot of appreciation from Mrs. Aisha AlAwadhi, ELT Senior Supervisor of English Language supervision. Then they decided to hold the competition among the whole educational area (Mubarak Al-Kabeer Educational area). In 2010-2011, the contest was held with 27 schools (12 schools for boys and 15 for girls - around 2700 pupils). Each school nominated a pupil from the fifth grade to participate. In 2012-2013, 30 schools participated. All the 30 pupils participated anxiously to win the competition with 200 words. It becomes officially an authorized contest in Mubarak Al-Kabeer Educational Area (Kuwaiti Spelling Bee) in Kuwait. In the school year 2013-2014 the competition was held in AL-Imam AL-Shafie primary school for boys with 31 schools and the words list contained 260 words. In 2014-2015 with the patronage of Mr. Talaq Al-Hiem the director of Mubarak Al-Kabeer Educational Area the competition held with the participation of 33 schools (16 girls, 15 boys and 2 LD) in Sabah AL-Salem Primary school with the help of its principal Mrs. Amira Baqer. Mrs. Aisha Al-Awadhi and the success of the competition convinced the ELT General supervision to decide the competition as Kuwait National Spelling Bee for the coming year 2015-2016.

In Pakistan, the spelling bee competition is promoted by Dawn, and it happens every year in October. There are three states district, regional and national. National is held in Islamabad.

Sylvan Learning Center, a supplemental education organization from the United States, has organized an annual competition for Dubai, Abu Dhabi and Sharjah-area schools. The Sylvan Spelling Challenge is held annually in December and February for students in grades 3-8. The Sylvan competition expects to attract nearly 1,000 participants from 30 schools in its inaugural year.

In 1876 there were newspaper reports of spelling bees in a number of towns in the United Kingdom. Since 2009 a spelling bee for schools has been run by The Times newspaper.

Serious spelling bee competitors in the United States will study affixes and etymologies, and often foreign languages from which English draws, in order to spell challenging words. Several preparatory materials have been published, including some in connection with the Scripps National Spelling Bee and those created by independent organizations not related to Scripps.

For the first several decades of publication, the Scripps annual study booklet was named Words of the Champions, which offered 3,000 words in a list separated into beginning, intermediate & expert groupings. In the mid-1990s the annual study list changed to Paideia (from the Greek word meaning education and culture), which ultimately contained more than 4,100 words, then again in 2006 to the shorter list, entitled Spell It!, the 2009 edition having 1155 words (911 basic words and 244 challenge words).

The Consolidated Word List, also published by Scripps and available on the National Spelling Bee website, consists of all words used in the National Bee as far back as 1950. It is organized into three sections: Words Appearing Infrequently, Words Appearing with Moderate Frequency, and Word Appearing Frequently. Nearly 800 pages and 24,000 words long, the Consolidated Word List is intended for those who have mastered the basics and already gone through Spell It!.

Spelling bee participants in the United States also use other reference books, notably the Hexco Academics series of spelling books, which feature strategies, methods and lists to further develop spelling skills. Tutoring materials are also becoming available on the web.

US Spelling bee students usually start competition elementary schools (primary schools) or middle schools. Classes compete against other classes in the same grade, or level, and the winning class is determined by the score of each class. On an individual level, school spelling bees determine which child will represent his or her school at district, state and national competitions.

Two boys from Vadodara have won the state final round of the Marrs International Spell Bee. They will now participate in the International prelims to be held at Hyderabad, India