From Infogalactic: the planetary knowledge core
Jump to: navigation, search
For the sensation of eating spicy-hot foods, see pungency. For other uses, see Spice (disambiguation).
Spices 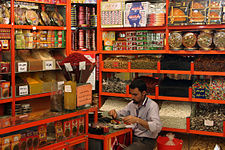 A spice shop selling a variety of spices in Iran 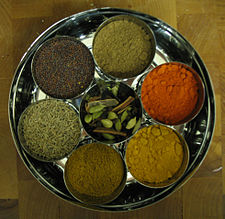 A group of Indian spices and herbs in bowls 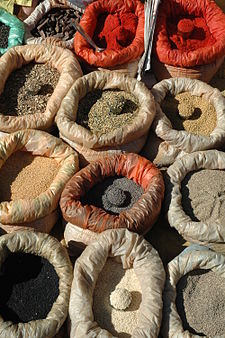 An assortment of spices used in Indian cuisine 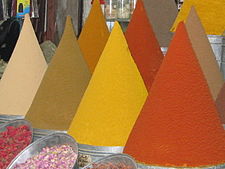 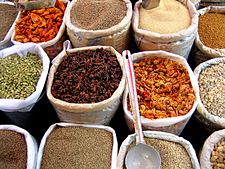 Spices and herbs at a grocery shop in Goa, India

A spice is a seed, fruit, root, bark, berry, bud or vegetable substance primarily used for flavoring, coloring or preserving food. Spices are distinguished from herbs, which are parts of leafy green plants used for flavoring or as a garnish. Many spices have antimicrobial properties. This may explain why spices are more commonly used in warmer climates, which have more infectious disease, and why the use of spices is prominent in meat, which is particularly susceptible to spoiling.[1] A spice may have other uses, including medicinal, religious ritual, cosmetics or perfume production, or as a vegetable. 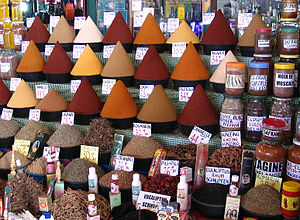 The spice trade developed throughout South Asia and Middle East in around 2000 BCE with cinnamon and pepper, and in East Asia with herbs and pepper. The Egyptians used herbs for embalming and their demand for exotic herbs helped stimulate world trade. The word spice comes from the Old French word espice, which became epice, and which came from the Latin root spec, the noun referring to "appearance, sort, kind": species has the same root. By 1000 BCE, medical systems based upon herbs could be found in China, Korea, and India. Early uses were connected with magic, medicine, religion, tradition, and preservation.[2]

Archaeological excavations have uncovered clove burnt onto the floor of a kitchen, dated to 1700 BCE, at the Mesopotamian site of Terqa, in modern-day Syria.[3] The ancient Indian epic Ramayana mentions cloves. The Romans had cloves in the 1st century CE, as Pliny the Elder wrote about them.[citation needed]

In the story of Genesis, Joseph was sold into slavery by his brothers to spice merchants. In the biblical poem Song of Solomon, the male speaker compares his beloved to many forms of spices. Generally, early Egyptian, Chinese, Indian, and Mesopotamian sources do not refer to known spices.[citation needed]

Historians believe that nutmeg, which originates from the Banda Islands in South Asia, was introduced to Europe in the 6th century BCE.[4]

Indonesian merchants traveled around China, India, the Middle East, and the east coast of Africa. Arab merchants facilitated the routes through the Middle East and India. This resulted in the Egyptian port city of Alexandria being the main trading center for spices. The most important discovery prior to the European spice trade were the monsoon winds (40 CE). Sailing from Eastern spice cultivators to Western European consumers gradually replaced the land-locked spice routes once facilitated by the Middle East Arab caravans.[2] 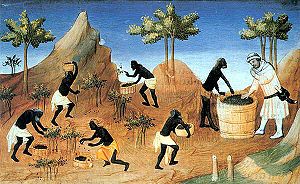 "The Mullus" Harvesting pepper. Illustration from a French edition of The Travels of Marco Polo.

Spices were among the most demanded and expensive products available in Europe in the Middle Ages,[5] the most common being black pepper, cinnamon (and the cheaper alternative cassia), cumin, nutmeg, ginger and cloves. Given medieval medicine's main theory of humorism, spices and herbs were indispensable to balance "humors" in food,[6] a daily basis for good health at a time of recurrent pandemics.

Spices were all imported from plantations in Asia and Africa, which made them expensive. From the 8th until the 15th century, the Republic of Venice had the monopoly on spice trade with the Middle East, and along with it the neighboring Italian city-states. The trade made the region rich. It has been estimated that around 1,000 tons of pepper and 1,000 tons of the other common spices were imported into Western Europe each year during the Late Middle Ages. The value of these goods was the equivalent of a yearly supply of grain for 1.5 million people.[7] The most exclusive was saffron, used as much for its vivid yellow-red color as for its flavor. Spices that have now fallen into obscurity in European cuisine include grains of paradise, a relative of cardamom which mostly replaced pepper in late medieval north French cooking, long pepper, mace, spikenard, galangal and cubeb.

The control of trade routes and the spice-producing regions were the main reasons that Portuguese navigator Vasco da Gama sailed to India in 1499.[8] Spain and Portugal were not happy to pay the high price that Venice demanded for spices. At around the same time, Christopher Columbus returned from the New World, he described to investors new spices available there.[citation needed]

Another source of competition in the spice trade during the 15th and 16th century was the Ragusans from the maritime republic of Dubrovnik in southern Croatia.[9]

The military prowess of Afonso de Albuquerque (1453–1515) allowed the Portuguese to take control of the sea routes to India. In 1506, he took the island of Socotra in the mouth of the Red Sea and, in 1507, Ormuz in the Persian Gulf. Since becoming the viceroy of the Indies, he took Goa in India in 1510, and Malacca on the Malay peninsula in 1511. The Portuguese could now trade directly with Siam, China, and the Maluku Islands. The Silk Road complemented the Portuguese sea routes, and brought the treasures of the Orient to Europe via Lisbon, including many spices.[citation needed]

With the discovery of the New World came new spices, including allspice, chili peppers, vanilla, and chocolate. This development kept the spice trade, with America as a late comer with its new seasonings, profitable well into the 19th century.[citation needed]

As times have changed and convenience has become a major factor for consumers, the spice trade has shifted into finding cheaper alternatives to satisfy demand.[citation needed] One of these ways is diluting spices to make inferior quality powdered spices, by including roots, skins and other admixture in production of spice powder.[10] 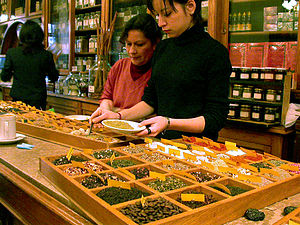 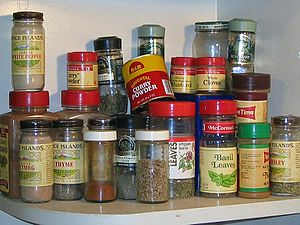 A typical home's kitchen shelf of spices as would be seen in the United States or Canada. 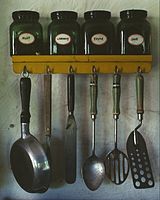 A spice rack with cooking utensils

A spice may be available in several forms: fresh, whole dried, or pre-ground dried. Generally, spices are dried.[11] A whole dried spice has the longest shelf life, so it can be purchased and stored in larger amounts, making it cheaper on a per-serving basis. Some spices are not always available either fresh or whole, for example turmeric, and often must be purchased in ground form. Small seeds, such as fennel and mustard seeds, are often used both whole and in powder form.

The flavor of a spice is derived in part from compounds (volatile oils) that oxidize or evaporate when exposed to air. Grinding a spice greatly increases its surface area and so increases the rates of oxidation and evaporation. Thus, flavor is maximized by storing a spice whole and grinding when needed. The shelf life of a whole dry spice is roughly two years; of a ground spice roughly six months.[12] The "flavor life" of a ground spice can be much shorter.[13] Ground spices are better stored away from light.[14]

To grind a whole spice, the classic tool is mortar and pestle. Less labor-intensive tools are more common now: a microplane or fine grater can be used to grind small amounts; a coffee grinder[15] is useful for larger amounts. A frequently used spice such as black pepper may merit storage in its own hand grinder or mill.

A study by the Food and Drug Administration of shipments of spices to the United States during fiscal years 2007-2009 showed about 7% of the shipments were contaminated by Salmonella bacteria, some of it antibiotic-resistant.[17] As most spices are cooked before being served salmonella contamination often has no effect, but some spices, particularly pepper, are often eaten raw and present at table for convenient use. Shipments from Mexico and India, a major producer, were the most frequently contaminated.[18]

However with new radiation sterilization methods, the risk of Salmonella contamination is now lower. 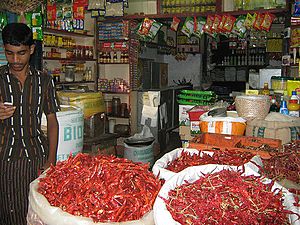 A spice shop in Taliparamba, India

Because they tend to have strong flavors and are used in small quantities, spices tend to add few calories to food, even though many spices, especially those made from seeds, contain high portions of fat, protein, and carbohydrate by weight. Many spices, however, can contribute significant portions of micronutrients to the diet. For example, a teaspoon of paprika contains about 1133 IU of Vitamin A, which is over 20% of the recommended daily allowance specified by the US FDA.[19] When used in larger quantity, spices can also contribute a substantial amount of minerals, including iron, magnesium, calcium, and many others, to the diet.

Most herbs and spices have substantial antioxidant activity, owing primarily to phenolic compounds, especially flavonoids, which influence nutrition through many pathways, including affecting the absorption of other nutrients. One study found cumin and fresh ginger to be highest in antioxidant activity.[20] These antioxidants can also act as natural preservatives, preventing or slowing the spoilage of food, leading to a higher nutritional content in stored food. 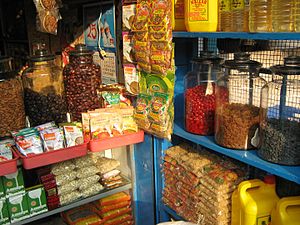