From Infogalactic: the planetary knowledge core
Jump to: navigation, search
For other uses, see Spirit (disambiguation). 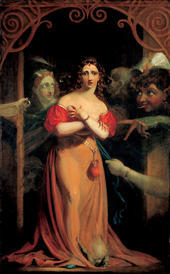 The English word spirit (from Latin spiritus "breath") has many different meanings and connotations, most of them relating to a non-corporeal substance contrasted with the material body. It can also refer to a "subtle" as opposed to "gross" material substance, as in the famous last paragraph of Sir Isaac Newton's Principia Mathematica.[1]

The word spirit is often used metaphysically to refer to the consciousness or personality. The notions of a person's spirit and soul often also overlap, as both contrast with body and both are believed to survive bodily death in some religions,[2] and "spirit" can also have the sense of "ghost", i.e. a manifestation of the spirit of a deceased person.

The term may also refer to any incorporeal or immaterial being, such as demons or deities.[3] In the Bible, "the Spirit" (with a capital "S"), specifically denotes the Holy Spirit.

The word "spirit" came into Middle English via Old French. The distinction between soul and spirit also developed in the Abrahamic religions: Arabic nafs (نفس) opposite rúħ (روح); Hebrew neshama (נְשָׁמָה nəšâmâh) or nephesh (in Hebrew neshama comes from the root NŠM or "breath") opposite ruach (רוּחַ rûaħ). (Note, however, that in Semitic just as in Indo-European, this dichotomy has not always been as neat historically as it has come to be taken over a long period of development: Both נֶ֫פֶשׁ (root נפשׁ) and רוּחַ (root רוח), as well as cognate words in various Semitic languages, including Arabic, also preserve meanings involving misc. air phenomena: "breath", "wind", and even "odour".[6][7][8])

In a lecture delivered to the literary Society of Augsburg, October 20, 1926, on the theme of “Nature and Spirit,” C. G. Jung, expressed: “The connection between spirit and life is one of those problems involving factors of such complexity that we have to be on our guard lest we ourselves get caught in the net of words in which we seek to ensnare these great enigmas. For how can we bring into the orbit of our thought those limitless complexities of life which we call "Spirit" or "Life" unless we clothe them in verbal concepts, themselves mere counters of the intellect? The mistrust of verbal concepts, inconvenient as it is, nevertheless seems to me to be very much in place in speaking of fundamentals. "Spirit" and "Life" are familiar enough words to us, very old acquaintances in fact, pawns that for thousands of years have been pushed back and forth on the thinker's chessboard. The problem must have begun in the grey dawn of time, when someone made the bewildering discovery that the living breath which left the body of the dying man in the last death-rattle meant more than just air in motion. It can scarcely be an accident onomatopoeic words like ruach, ruch, roho (Hebrew, Arabic, Swahili ) mean ‘spirit’ no less clearly than the Greek πνεύμα and the Latin spiritus.”[9]

In spiritual and metaphysical terms, "spirit" has acquired a number of meanings:

Related concepts in other languages

Similar concepts in other languages include Greek pneuma and Sanskrit akasha/atman[3] (see also prana). Some languages use a word for "spirit" often closely related (if not synonymous) to "mind". Examples include the German Geist (related to the English word "ghost") or the French 'l'esprit'. English versions of the Bible most commonly translate the Hebrew word "ruach" (רוח; "wind") as "the spirit", whose essence is divine[15] (see Holy Spirit and ruach hakodesh). Alternatively, Hebrew texts commonly use the word nephesh. Kabbalists regard nephesh as one of the five parts of the Jewish soul, where nephesh (animal) refers to the physical being and its animal instincts. Similarly, Scandinavian, Baltic, and Slavic languages, as well as Chinese (气 qi), use the words for "breath" to express concepts similar to "the spirit".[3]