Spirit Racing was a racing car constructor and racing team from Britain, who participated in 25 World Championship Formula One Grands Prix between 1983 and 1985. The team scored no World Championship points, its best finish being seventh place at the 1983 Dutch Grand Prix.

Founded in 1981 by Gordon Coppuck and John Wickham,[1] Spirit had a close relationship with Honda. Despite being relatively new entrants to the formula, Spirit were selected to use Honda's RA series 2-litre V6 engine in the European Formula Two Championship in 1982, running Thierry Boutsen (who won three rounds of the series) and Stefan Johansson. 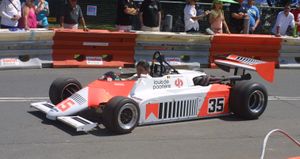 Honda were keen to move up to Formula One and Spirit modified the 201 F2 chassis to F1 spec and began a testing programme in November 1982 at Silverstone, planning to join the 1983 World Championship at mid-season. Honda were anxious to keep a low profile for the programme (much as they had been in 1964 for their previous Grand Prix team); thus Boutsen (seen as a rising star) was dropped in favour of Johansson (seen as a faded talent after a disappointing debut for Shadow in 1980). At Honda's behest the team avoided testing at the same time as other Formula One teams, largely at Willow Springs but also at Jacarepaguá into 1983.

The team then made a tentative debut at the non-championship Race of Champions at Brands Hatch. Despite the team's testing mileage (and setting second fastest time in free practice) Johansson failed to record a time in qualifying after engine problems and started from the back of the grid then retired early after a radiator was punctured in a collision with Roberto Guerrero. The team went back to testing, passing the 9000-mile mark after further sessions at Silverstone, Brands Hatch and Donington before entering the British Grand Prix. Johansson qualified 14th after continued technical problems and briefly battled with the Lotus of Nigel Mansell before retiring with a broken fuel pump. The team then stayed in the series but mechanical problems continued to blight the car despite a decent show of speed; their best result was 7th at Zandvoort.

Honda were concerned with the lack of progress and were being courted by Williams, who needed a turbo engine and had a star driver in the shape of Keke Rosberg. The Japanese company opted to back Williams for 1984 and after a nightmare weekend at the Italian Grand Prix (where Spirit's first purpose designed F1 car - the 101 - was presented but not driven after a catalogue of technical problems) decided they were not able to provide engines for two teams and dropped Wickham's outfit. 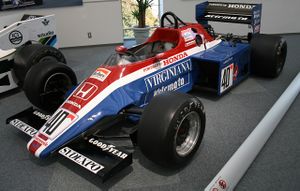 Spirit decided to continue in 1984 with Hart turbocharged engines. Inititally twice world champion Emerson Fittipaldi and moneyed Italian Fulvio Ballabio were slated to drive. However Fittipaldi left to find a drive in Indycars after finding the machine uncompetitive and Ballabio was refused a Super Licence. Instead Mauro Baldi found funds and was nominated as the team's sole driver, Johansson being released as he could not find the funding to continue. The 101 was a neat but underpowered car and Baldi struggled to move away from the rear of the grid. Jean-Louis Schlesser had planned to take over from the third race before the threat of litigation from RAM (still owed money by the Frenchman) saw Baldi stay until Huub Rothengatter took over. When the Dutchman's money ran out Baldi found enough funds to complete the season. The team's best result was 8th place, scored by Baldi on three occasions and Rothengatter once.

The 101 chassis (having been progressively upgraded throughout 1984) was updated again for 1985 and Baldi continued to drive. Allen Berg had arranged a deal to take over the seat later in the season. Money was even tighter, however, and after three rounds Wickham decided to take up an offer from Toleman to buy out the team's tyre contract and folded the F1 outfit. Wickham initially promised to be back with a new car in 1986 but that never happened. Spirit briefly resurfaced in Formula 3000 in 1988, running Bertrand Gachot with some success, but Wickham left the outfit midway through the season and the team folded at the end of the year.