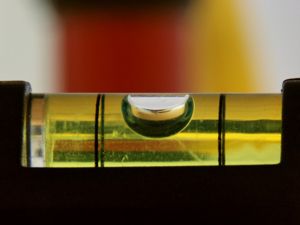 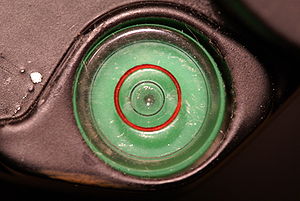 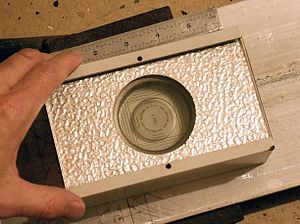 A spirit level, bubble level or simply a level is an instrument designed to indicate whether a surface is horizontal (level) or vertical (plumb). Different types of spirit levels may be used by carpenters, stonemasons, bricklayers, other building trades workers, surveyors, millwrights and other metalworkers, and in some photographic or videographic work.

Early spirit levels had very slightly curved glass vials with constant inner diameter at each viewing point. These vials are incompletely filled with a liquid, usually a colored spirit or alcohol, leaving a bubble in the tube. They have a slight upward curve, so that the bubble naturally rests in the centre, the highest point. At slight inclinations the bubble travels away from the marked center position. Where a spirit level must also be usable upside-down or on its side, the curved constant-diameter tube is replaced by an uncurved barrel-shaped tube with a slightly larger diameter in its middle.

Alcohols such as ethanol are often used rather than water. Alcohols have low viscosity and surface tension, which allows the bubble to travel the tube quickly and settle accurately with minimal interference with the glass surface. Alcohols also have a much wider liquid temperature range, and won't break the vial as water could due to ice expansion. A colorant such as fluorescein, typically yellow or green, may be added to increase the visibility of the bubble.

An extension of the spirit level is the bull's eye level: a circular, flat-bottomed device with the liquid under a slightly convex glass face with a circle at the center. It serves to level a surface across a plane, while the tubular level only does so in the direction of the tube.

Adjustment of the spirit level is performed by successively rotating the level and moving the bubble tube within its housing to take up roughly half of the discrepancy, until the magnitude of the reading remains constant when the level is flipped.

A similar procedure is applied to more sophisticated instruments such as a surveyor's level or a theodolite and is a matter of course each time the instrument is set up. In this latter case, the plane of rotation of the instrument is levelled, along with the spirit level. This is done in two horizontal perpendicular directions.

The sensitivity is an important specification for a spirit level; its accuracy depends on its sensitivity. The sensitivity of a level is given as the change of angle or gradient required to move the bubble by unit distance. If the bubble housing has graduated divisions then the sensitivity is the angle or gradient change that moves the bubble by one of these divisions. 2 mm (0.079 in) is the usual spacing for graduations; on a surveyor's level the bubble will move 2 mm when the vial is tilted about 0.005 degree. For a precision machinist level with 2mm divisions, when the vial is tilted 5 arc seconds the bubble will move one graduation. This is equivalent to movement of .0005 inches measured one foot from the pivot point; referred to as 5 ten thousands per foot.

There are different types of spirit levels for different uses:

A spirit level is usually found on the head of combination squares. 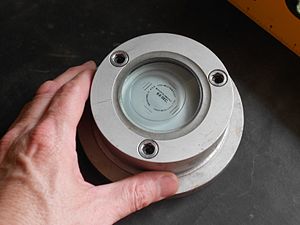 Tilting level, dumpy level or automatic level[1] are terms used to refer to types of leveling instruments as used in surveying to measure height differences over larger distances. It has a spirit level mounted on a telescope (perhaps 30 power) with cross-hairs, itself mounted on a tripod. The observer reads height values off two graduated vertical rods, one 'behind' and one 'in front', to obtain the height difference between the ground points on which the rods are resting. Starting from a point with a known elevation and going cross country (successive points being perhaps 100 meters (328 ft) apart) height differences can be measured cumulatively over long distances and elevations can be calculated. Precise levelling is supposed to give the difference in elevation between two points one kilometer (0.62 miles) apart correct to within a few millimeters.

A traditional carpenter's spirit level looks like a short plank of wood and often has a wide body to ensure stability, and that the surface is being measured correctly. In the middle of the spirit level is a small window where the bubble and the tube is mounted. Two notches (or rings) designate where the bubble should be if the surface is level. Often an indicator for a 45 degree inclination is included.

An engineer's precision level permits leveling items to greater accuracy than a plain spirit level. They are used to level the foundations, or beds of machines to ensure the machine can output workpieces to the accuracy pre-built in the machine.

The spirit level was invented by Melchisedech Thevenot (born in 1620; died 29 October 1692).[citation needed] Thevenot was an amateur scientist and patron of many scientists and mathematicians. He was wealthy and well-connected, later becoming the Royal Librarian to King Louis XIV of France.[citation needed] Thevenot invented the instrument some time before February 2, 1661.[citation needed] This date can be established from Thevenot's correspondence with scientist Christiaan Huygens. Within a year of this date the inventor circulated details of his invention to others, including Robert Hooke in London and Vincenzo Viviani in Florence.[citation needed] It is occasionally argued that these bubble levels did not come into widespread use until the beginning of the eighteenth century, the earliest surviving examples being from that time, but Adrien Auzout had recommended that the Académie Royale des Sciences take "levels of the Thevenot type" on its expedition to Madagascar in 1666.[citation needed] It is very likely that these levels were in use in France and elsewhere long before the turn of the century.[citation needed]

It must however be noted that the Frenchman Guillaume Rondelet mentions the spirit level in his scientific work called "L’histoire entière des poissons" in 1558. Here he compares the shape of the body of the dragonfly larvae to a spirit bubble level. (See Libellen (de)) Therefore, it must be assumed the spirit level was in existence in some form at least a century before Thevenot claimed to have invented it. To see Rondelet's original French work, go to paper page 157 (electronic page 0605) at the following link: http://docnum.u-strasbg.fr/cdm/compoundobject/collection/coll13/id/27045/show/26409. Here he describes the "Libella fluuiatilis" (the dragonfly larvae) and makes the comparison. Interestingly, this is apparently the historical reason that in the German language today the dragonfly and the spirit level are both named "Libelle". (As per wiki reference above.)

Thevenot is often confused with his nephew, the traveler Jean de Thevenot (born 1633; died 1667). There is evidence to suggest that both Huygens and Hooke later laid claim to the invention, although only within their own countries.[citation needed]

The Fell All-Way precision level, one of the first successful American made bull's eye levels for machine tool use, was invented by William B. Fell, Rockford, Illinois prior to WWII in 1939.[2] The device was unique in that it could be placed on a machine bed and show tilt on the x-y axes simultaneously; eliminating the need to rotate the level 90 degrees.[citation needed] The level was so accurate it was restricted from export during World War II.[citation needed] The device set a new standard of .0005 inches per foot resolution (five ten thousands per foot or five arc seconds tilt).[citation needed] The level's production stopped around 1970. Production restarted in the 1980s by Thomas Butler Technology, Rockford, Illinois, but finally ended in the mid 1990s. However, there are still hundreds of the highly prized devices in existence.[citation needed]

Digital levels are increasingly common in replacing conventional spirit levels particularly in civil engineering applications, such as building construction and steel structure erection, for on-site angle alignment and leveling tasks. The industry practitioners often refer those levelling tool as: “construction level”, “heavy duty level”, "inclinometer" or “protractor”. These modern electronic levels are (i) capable of displaying precise numeric angles within 360° with high accuracy, (ii) digital readings can be read from a distance with clarity, (iii) affordable price resulted from mass adoption, providing advantages that the traditional levels are unable to match. Typically, these features enable steel beam frames under construction to be precisely aligned and levelled to the required orientation, which is vital to effectively ensure the stability, strength and rigidity of steel structures on sites. Digital levels, embedded with angular MEMS technology effectively improve productivity and quality of many modern civil structures used by on-site constructions workers. Some of the recent models are even designed with waterproof IP65 and impact resistance features to meet the stringent working environment of the industry.