From Infogalactic: the planetary knowledge core
(Redirected from Spiritual works of mercy)
Jump to: navigation, search 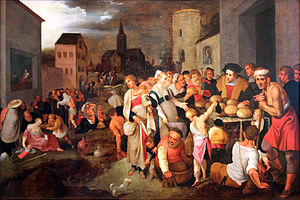 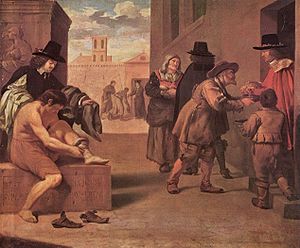 Works of Mercy by Pierre Montallier, 1680

Works of mercy (sometimes known as acts of mercy) are practices which Christians perform.

The practice is commonly attributed to the Roman Catholic Church as an act of both penance and charity. In addition, the Methodist church teaches that the works of mercy are a means of grace which lead to holiness[1] and aid in sanctification.[2]

The works of mercy have been traditionally divided into two categories, each with seven elements:

Pope John Paul II issued a papal encyclical "Dives in misericordia" on 30 November 1980 declaring that "Jesus Christ taught that man not only receives and experiences the mercy of God, but that he is also called "to practice mercy" towards others.[6] Another notable devotion associated with the works of mercy is the Divine Mercy, which are reputed to be apparitions of Jesus Christ to Saint Faustina Kowalska.

In the Roman Catholic Church

The Works of Mercy, by the Master of Alkmaar made for the Church of Saint Lawrence in Alkmaar, Netherlands. The wooden panels show the works of mercy in this order: feed the hungry, give drink to the thirsty, clothe the naked, bury the dead, shelter the traveler, comfort the sick, and free the imprisoned. Circa 1504. 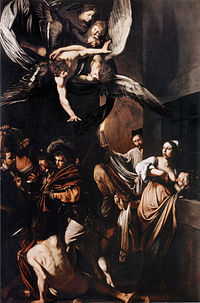 The Seven Works of Mercy by Caravaggio.

Corporal works of mercy are those that tend to bodily needs of others. In Matthew 25:34-40, in the The Judgment of Nations, six specific Works of Mercy are enumerated, although not this precise list — as the reason for the salvation of the saved, and the omission of them as the reason for damnation. The last work of mercy, burying the dead, comes from the Book of Tobit.[3][4]

Though generally enjoined upon all the faithful, often, in particular cases, a given individual will not be obligated or even competent to perform four of the seven spiritual works of mercy, namely: instructing the ignorant, counseling the doubtful, admonishing sinners, and comforting the afflicted. These works may require a definitely superior level of authority or knowledge or an extraordinary amount of tact. The other three works - bearing wrongs patiently, forgiving offences willingly, praying for the living and the dead - are considered to be an obligation of all faithful to practise unconditionally.[4]

In Methodist teaching, doing merciful acts is a prudential means of grace.[9] Along with works of piety, they are necessary for the believer to move on to Christian perfection.[10] In this sense, the Methodist concern for people at the margins is closely related to its worship.[11] As such, these beliefs have helped create the emphasis of the social gospel in the Methodist Church.[12]