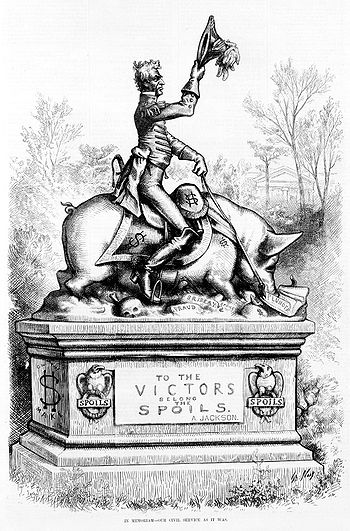 In memoriam--our civil service as it was, a political cartoon by Thomas Nast showing statue of Andrew Jackson on a pig, which is over "fraud", "bribery", and "spoils", eating "plunder". Featured in Harper's Weekly on 28 April 1877, p. 325.

In the politics of the United States, a spoils system (also known as a patronage system) is a practice in which a political party, after winning an election, gives government jobs to its supporters, friends and relatives as a reward for working toward victory, and as an incentive to keep working for the party—as opposed to a merit system, where offices are awarded on the basis of some measure of merit, independent of political activity.

The term was derived from the phrase "to the victor belong the spoils" by New York Senator William L. Marcy,[1][2] referring to the victory of the Jackson Democrats in the election of 1828, with the term spoils meaning goods or benefits taken from the loser in a competition, election or military victory.[3]

Similar spoils systems are common in other nations that traditionally have been based on tribal organization or other kinship groups and localism in general.

Before March 8, 1829, moderation had prevailed in the transfer of political power from one presidency to another. President Andrew Jackson's inauguration signaled a sharp departure from past presidencies. An unruly mob of office seekers made something of a shambles of the March inauguration, and though some tried to explain this as democratic enthusiasm, the real truth was Jackson supporters had been lavished with promises of positions in return for political support. These promises were honored by an astonishing number of removals after Jackson assumed power. At the beginning of Jackson's administration, fully 919 officials were removed from government positions, amounting to nearly 10 percent of all government postings.[4]:328–33

The Jackson administration attempted to explain this unprecedented purge as reform, or constructive turnover, aimed at creating a more efficient system where the chain of command of public employees all obeyed the higher entities of government. The hardest changed organization within the federal government proved to be the post office. The post office was the largest department in the federal government, and had even more personnel than the war department. In one year 423 postmasters were deprived of their positions, most with extensive records of good service.[4] :334

Less obvious than the incompetence and/or indolence of many of its political appointees was the spoil system's propensity for also corrupting or installing already corrupt public officials. An early and glaring example of the perfidy that was associated with the spoils system is the matter of Clerk of the U.S. House of Representatives (1843-1845) Caleb J. McNulty's alleged embezzlement of U.S. House funds, or what then former U.S. President and sitting Whig Party U.S. Representative John Quincy Adams called a "… memorable development of Democratic defalcation."[5]

By the late 1860s, citizens began demanding civil service reform. Running under the Liberal Republican Party in 1872, they were soundly defeated by Ulysses S. Grant.

After the assassination of James A. Garfield by a rejected office-seeker in 1881, the calls for civil service reform intensified. Moderation of the spoils system at the federal level came with the passage of the Pendleton Act in 1883, which created a bipartisan Civil Service Commission to evaluate job candidates on a nonpartisan merit basis. While few jobs were covered under the law initially, the law allowed the President to transfer jobs and their current holders into the system, thus giving the holder a permanent job. The Pendleton Act's reach was expanded as the two main political parties alternated control of the White House every election between 1884 and 1896. After each election the outgoing President applied the Pendleton Act to jobs held by his political supporters. By 1900, most federal jobs were handled through civil service and the spoils system was limited only to very senior positions.

The separation between the political activity and the civil service was made stronger with the Hatch Act of 1939 which prohibited federal employees from engaging in many political activities.

The spoils system survived much longer in many states, counties and municipalities, such as the Tammany Hall ring, which survived well into the 1930s when New York City reformed its own civil service. Illinois modernized its bureaucracy in 1917 under Frank Lowden, but Chicago held on to patronage in city government until the city agreed to end the practice in the Shakman Decrees of 1972 and 1983. Modern variations on the spoils system are often described as the political machine.