From Infogalactic: the planetary knowledge core
Jump to: navigation, search
For other uses, see Sponge (disambiguation). 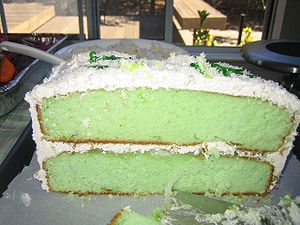 Sponge cake is a cake based on flour (usually wheat flour), sugar, and eggs, and is sometimes leavened with baking powder.[1] It has a firm, yet well aerated structure, similar to a sea sponge. A sponge cake may be produced by the batter method or the foam method.

The sponge cake is thought to be one of the first of the non-yeasted cakes, and the earliest attested sponge cake recipe in English is found in the book by English poet and author Gervase Markham, The English Huswife, Containing the Inward and Outward Virtues Which Ought to Be in a Complete Woman (1615).[2] Though it does not appear in Hannah Glasse's The Art of Cookery made Plain and Easy (1747) in the late 18th century, it is found in Lydia Maria Child's The American Frugal Housewife (1832)[3] indicating that sponge cakes had been established in Grenada in the Caribbean, by the early 19th century.

Variations on the theme of a cake lifted, partially or wholly, by trapped air in the batter exist in most places where European patisserie has spread, including the Anglo-Jewish "plava",[4] Italian Génoise, the Portuguese pão-de-ló, and the possibly ancestral Italian pan di Spagna ("Spanish bread").[5][6]

Derivatives of the basic sponge cake idea include the American chiffon cake and the Latin American Tres leches cake.[7]

Using the weight of 3 eggs, weigh the fat, sugar, and flour. A typical sponge cake is made by beating the eggs with sugar until they are light and creamy,[8] then carefully sieving and folding in the flour (depending on the recipe, the flour may be mixed with a small amount of baking powder, though some recipes use only the air incorporated into the egg mixture, relying on the denaturing of the egg proteins and the thermal expansion of the air to provide leavening). Sometimes, the yolks are beaten with the sugar first while the whites are beaten separately to a meringue-like foam, to be gently folded in later.[9] The mixture is then poured into the chosen cake tin and baked. Both methods take great care to incorporate air in the beating, whisking, and sieving stages. This makes a very light product, but it is easy to lose the air by removing the cake before it has finished in the oven.

Before the mixture has cooled after cooking, it is still flexible. This allows the creation of rolled cakes such as the Swiss roll or the Bûche de Noël. This basic recipe is also used for many treats and puddings, such as madeleines, ladyfingers, and trifles, as well as some versions of strawberry shortcake.[8][10] In addition, the sponge cake technique is used in angel food cake (where only egg whites are used) and some recipes for Belgian waffles (where the egg whites are separated from the yolk and folded into the batter at the end of preparation). 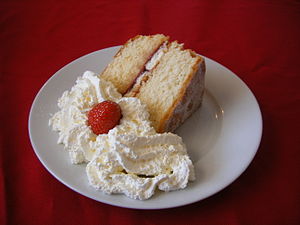 A slice of Victoria sponge cake, served with cream and a strawberry

The Victoria sponge, also known as the Victoria sandwich or Victorian Cake,[11] was named after Queen Victoria, who was known to enjoy a slice of the sponge cake with her afternoon tea. It is often referred to simply as "sponge cake", though it contains additional fat. A typical Victoria sponge consists of raspberry jam and whipped double cream or vanilla cream. The jam and cream are sandwiched between two sponge cakes; the top of the cake is not iced or decorated apart from a dusting of icing sugar. The Women's Institute publishes a variation on the Victoria sandwich that has raspberry jam as the filling and is dusted with caster sugar, not icing sugar.[12]

A Victoria sponge is made using one of two methods.[11] The traditional method involves creaming caster sugar with fat (usually butter), mixing thoroughly with beaten egg, then folding flour and raising agent into the mixture. The modern method, using an electric mixer or food processor, involves simply whisking all the ingredients together until creamy.[8][9][10] Additionally, the modern method typically uses an extra raising agent, and some recipes call for an extra-soft butter or margarine.[11] Both the traditional and modern methods are relatively quick and simple, producing consistent results, making this type of mixture one of the most popular for children and people in a hurry. This basic 'cake' mixture has been made into an endless variety of treats and puddings, including cupcakes, chocolate cake, Eve's pudding, and many others.[8][9][10]

Sponge cakes can also be made suitable for vegan, lacto-ovo intolerant, and low cholesterol diets. Most often this is done by using plant based milk instead of dairy (such as rice milk or soya milk) and vegetable oil, flax seeds, bananas, or powdered egg replacers, instead of eggs.

Since sponge cakes are not leavened with yeast, they are popular dessert choices for the Passover feast.[14] Typically, Passover sponges are made with matzo meal, shredded coconut,[15] matzo flour, potato flour, or nut flour (almond, hazelnut etc.) since raw wheat products may not be used.[16] No raising agent may be used due to the strict prohibition of even the appearance of a leavening effect. Therefore, the beating of egg whites in the mix to achieve the aeration is an essential characteristic of any Passover Sponge recipe. So popular is the sponge cake at Passover that most families have at least one recipe they pass down through generations which is referred to as the Passover Sponge Cake, and matzo meal-based cake mixes are available commercially. Several brands are easily found in kosher stores, especially before Passover. Typical Passover sponge flavorings include almonds, apples, dark chocolate, lemon, pecans, and poppyseeds. Either apple or orange juice is the liquid ingredient. Milk is avoided, because it cannot be included in a dessert to be served after a meat based meal. The sponge, or a heavier variant in the form of an almond pudding, may be included as an element of the dessert in the Passover meal during the Seder service, when it is often combined in serving with a fruit compote.[citation needed]