Spontaneous parametric down-conversion (also known as SPDC, parametric fluorescence, or parametric scattering) is an important process in quantum optics, used especially as a source of entangled photon pairs, and of single photons.

File:Scheme of spontaneous parametric down-conversion.pdf
An SPDC scheme with the Type I output
The video of an experiment showing vacuum fluctuations (in the red ring) amplified by SPDC (corresponding to the image above)

A nonlinear crystal is used to split photon beams into pairs of photons that, in accordance with the law of conservation of energy and law of conservation of momentum, have combined energies and momenta equal to the energy and momentum of the original photon and crystal lattice, are phase-matched in the frequency domain, and have correlated polarizations. (The state of the crystal is unchanged by the process.) If the photons share the same polarization it is deemed Type I correlation; if they have perpendicular polarisations it is deemed Type II. There is no polarization correlation between successive photon sets. The fundamental reason why some of the photons are split is not understood as of 2008.[1]

SPDC is stimulated by random vacuum fluctuations, and hence the photon pairs are created at random times. The conversion efficiency is very low, on the order of 1 pair per every 1012 incoming photons.[2] However, if one of the pair (the "signal") is detected at any time then its partner (the "idler") is known to be present. The output of a Type I down converter is a squeezed vacuum that contains only even photon number terms. The output of the Type II down converter is a two-mode squeezed vacuum. 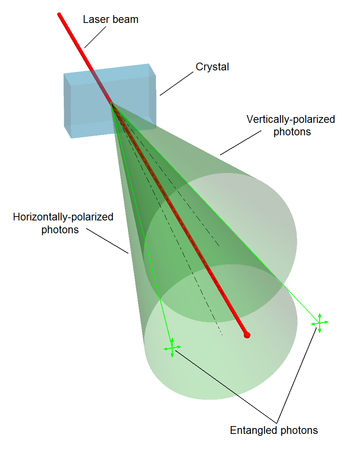 An SPDC scheme with the Type II output

In a commonly used SPDC apparatus design, a strong laser beam, termed the "pump" beam, is directed at a BBO (beta-barium borate) crystal. Most of the photons continue straight through the crystal. However, occasionally, some of the photons undergo spontaneous down-conversion with Type II polarization correlation, and the resultant correlated photon pairs have trajectories that are constrained to be within two cones, whose axes are symmetrically arranged relative to the pump beam. Also, due to the conservation of energy, the two photons are always symmetrically located within the cones, relative to the pump beam. Importantly, the trajectories of the photon pairs may exist simultaneously in the two lines where the cones intersect. This results in entanglement of the photon pairs whose polarization are perpendicular.[3][4]:205

Another crystal is KDP (Potassium Dihydrogen Phosphate) which is mostly used in Type I down conversion, where both photons have the same polarization.[5]

SPDC was described as early as 1970 by D. C. Burnham and D. L. Weinberg.[6][7] It was first applied to experiments related to coherence by two independent pairs of researchers in the late 1980s: Carroll Alley and Yanhua Shih, and Rupamanjari Ghosh and Leonard Mandel.[8][9] The duality between incoherent (Van Cittert–Zernike theorem) and biphoton emissions was found.[10]

SPDC allows for the creation of optical fields containing (to a good approximation) a single photon. As of 2005, this is the predominant mechanism for experimentalists to create single photons (also known as Fock states).[11] Recently, an alternative electrically driven semiconductor source was proposed based on the newly observed effect of two-photon emission from semiconductors.[12] The single photons as well as the photon pairs are often used in quantum information experiments and applications like quantum cryptography and Bell test experiments.