Sports in France play an important role in French society, and the country has a strong sporting history. The most popular sport in France is football. 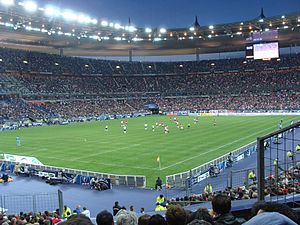 Football, known in some countries as soccer, is the most popular sport in France, with 1,973,270 licensed players in the leagues.[1] The sport was imported from England at the end of the 19th century, under the name of association football. In its early days, the sport gained followers mainly in the Paris area and the Northern part of the country - Nord-Pas-de-Calais and Normandy were the first teams that were created outside Paris. In the South, football's competitor, rugby football, was more favoured at the time. Established in 1919 from competing organizations, the Fédération française de football consists of 18,000 teams.[1]

It is also one of only nine teams to have won the UEFA European Championship (1984 and 2000). France was also the 1984 Olympic Champion.

Ligue 1 is the French professional league for association football clubs. It is the country's primary football competition and serves as the top division of the French football league system. Contested by 20 clubs, it operates on a system of promotion and relegation with Ligue 2. The most successful club in the French first division history is AS Saint-Étienne with 10 championships (last one in 1981), followed by Olympique de Marseille with 9 titles and FC Nantes with 8 titles.

Women's national professional competitions are supervised by the Fédération française de football. The first division is the Championnat de France de football féminin. Olympique Lyonnais is the most successful team in French first division history with 12 titles, including an ongoing streak of eight titles (2007 to present). In the UEFA Women's Champions League, OL have won twice (2011 and 2012) and have been runners-up twice (2010 and 2013).

As of the 2010–11 season, 18 French citizens have played in the NBA in the USA and Canada. Twelve are currently playing, most notably San Antonio Spurs point guard Parker, with four NBA titles to his credit; Spurs forward Diaw; and Chicago Bulls forward Noah, also notable for his college career at the University of Florida in which he starred on a team that won two NCAA titles with the same starting lineup.

Men's national professional competitions are supervised by the Ligue Nationale de Basketball. There are two divisions: Pro A (first division) and Pro B (second division). ASVEL Lyon-Villeurbanne is the most successful team in French first division history with 17 titles from 1949 to 2009. Limoges CSP is the only French team to have won the Euroleague in 1993.

The France women's national basketball team is two times European Champion (2001 and 2009), and also claimed a silver medal at the 2012 Summer Olympics.

Women's national professional competitions are supervised by the Fédération Française de Basket-Ball with the first division being the Ligue féminine de basket. Clermont Université Club is the most successful team in French first division history with 13 titles from 1968 to 1981. CJM Bourges (1997, 1998, and 2001) and US Valenciennes (2002 and 2004) have won the EuroLeague Women. 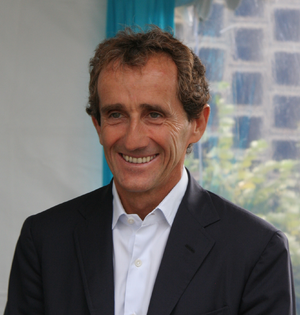 France holds an annual ice racing championship at the end of each year, called the Andros Trophy. 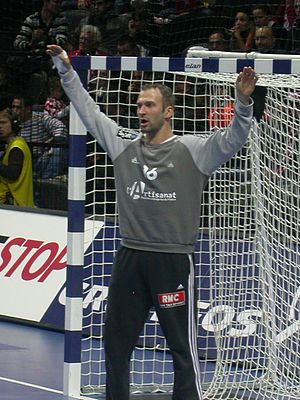 Men's national professional competitions are supervised by the Ligue nationale de handball with the top division being the Championnat de France de handball. Montpellier Agglomération Handball is the most successful team in French first division history with 13 titles from 1995 to 2011. The team is also the only French team to have won the EHF Champions League in 2003.

Women's main national professional competition is the Championnat de France de handball féminin. Metz Handball is the most successful team in French first division history with 17 titles from 1989 to 2011. No French team has reached the semi-finals at the EHF Women's Champions League so far. 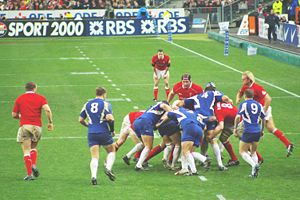 Rugby union (rugby à 15 or jeu à 15) was first introduced in the early 1870s by British residents. While football is much more popular nationally, rugby union is predominant in the southern half of the country, especially around Toulouse, the French Basque country and Catalonia. Elite French clubs participate in the domestic club competition - the Top 14. Clubs also compete in the European knock-out competitions, the European Rugby Champions Cup and European Rugby Challenge Cup. It is the seventh largest French team sport in the terms of licensed players with 457,018 licensed players (2012).

The national side is one of the tier 1 national teams. It competes annually in the Six Nations Championship, and won it outright 16 times. France has been to every Rugby World Cup since its inception in 1987, and has been a runner-up on three occasions, most recently in 2011. France hosted the 2007 Rugby World Cup.

Ice hockey is a fairly popular sport in France, especially in the Rhône-Alpes region and in the cities of Rouen, Amiens and Tours. The governing body is the FFHG which administeres the national championship, Ligue Magnus (founded in 1907). The national team is currently ranked in the top 20 in the IIHF World Ranking. In recent years numerous French ice hockey players have made the NHL, the premier ice hockey competition on the planet based in the United States and Canada including Stanley Cup winner Cristobal Huet and Dallas Stars forward Antoine Roussel.

Australian rules football is a growing sport in France with the first clubs forming in the 1990s. There are several clubs around the country forming a ""Super League" and some other clubs playing in a developmental league. There is a national men's Australian Football team that has plays international matches and competes in the Australian Football International Cup, which is essentially a World Cup for all countries apart from Australia. 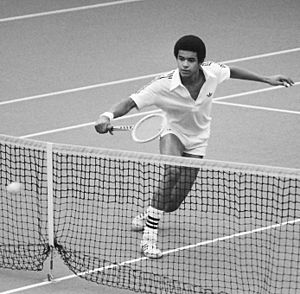 Yannick Noah is the last french to won Roland Garros

France holds the annual cycling race Tour de France, which takes place each July and lasts for three weeks. It is one of the three Grand Tours, which are the most prestigious stage races in road cycling. The Tour has been won 36 times by French cyclists in its 110-year history. Cycling is very popular in France, evident from the fact that the race of Tour de France attracts more than 12 million people who travel to witness the race first hand. The Tour de France also attracts a television audience of 3.5 billion people worldwide. In addition the north of France hosts the one-day race Paris–Roubaix, known as one of the cobbled classics famous for the use of cobblestones or setts as challenging terrain, and as one of the five "Monuments" which along with the road racing World Championship are the most important one-day classic cycle races. Other high-profile races which are included as part of the top-level UCI World Tour circuit include the stages races Paris–Nice and the Critérium du Dauphiné (often used as a warm-up race for riders competing in the Tour de France), and the one-day race GP Ouest-France.

Though it is little known, Gaelic football is developing in France. There are currently 20 clubs across the country with 80% of the players French.[2] 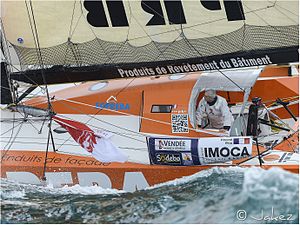 Professional sailing in France is centered on singlehanded/shorthanded ocean racing with the pinnacle of this branch of the sport being the Vendée Globe singlehanded around the world race which starts every 4 years from the French Atlantic.

Pétanque is mostly played in the South of France. Pétanque is not considered as a sport by many northern Frenchmen though the international federation is recognized by the IOC. [1] [2]. Professional players play the very competitive form of Pétanque which is called Pétanque Sport, under precise rules. The competitive form is played by about 480,000 persons licensed with the Federation Française de Pétanque et Jeu Provençal (FFPJP). The FFPJP is the 4th largest sports federation in France.

Developed in France, parkour ("art du déplacement") is a physical activity that is difficult to categorize. It is an art that resembles self-defense and martial arts. According to the founder David Belle, the spirit of parkour is guided in part by the notions of 'escape' and 'reach,' that is, the idea of using quick thinking with dexterity to get out of difficult situations.

An important characteristic of parkour is efficiency. The basic meaning of this is that a traceur must not merely move as fast as he can, Bur's unofficial motto is être et durer (to be and to last), efficiency also involves avoiding injuries, short and long-term.

Table football (babyfoot) is a very popular pastime in bars and in homes in France, and the French are the predominant winners of worldwide table football competitions.

Orienteering is a reasonably popular sport in France; it is regulated by the Fédération Française de Course d'Orientation (FFCO) .[3]

Cricket is a developing sport is France. Some reports point that cricket was invented in France. However, the sport is relatively unknown due to inadequate media coverage. In fact, the 1900 Olympic games, the only one where cricket was played, featured bitter rivals England and France taking on each other. A rematch of the two teams was said to take place just before the 2012 Olympics.

Skiing is a popular sport in France, especially in mountainous areas in the south, centre and east of the country where most French ski resorts are located

French success in cross-country skiing has been somewhat more limited. However Vincent Vittoz did win a gold medal in the 15 km + 15 km double pursuit at the FIS Nordic World Ski Championships in 2005. He also finished as runner up in the Distance World Cup for three consecutive seasons from 2004/05 to 2006/07.

Jason Lamy-Chappuis has been an extremely successful competitor in Nordic combined. He won a gold medal in the Individual normal hill/10 km competition at the 2010 Winter Olympics as well as four World Championship golds and three consecutive FIS Nordic Combined World Cups between 2009/10 and 2011/12.