Sports in Italy have a long tradition. In numerous sports, both individual and team, Italy has good representation and many successes. Football is the most popular sport in Italy. Basketball, volleyball, and Cycling are the next most popular/played sports, with Italy having a rich tradition in all three. Italy won the 2006 FIFA World Cup, and is (along with Germany) currently the second most successful football team in World Cup history, after Brazil, having won four FIFA World Cup championships. Italy also has strong traditions in rugby union, tennis, athletics, fencing, and winter sports. 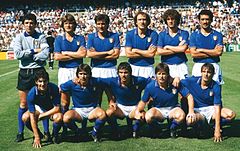 The Italian national football team at the 1982 FIFA World Cup.

Football is the most popular sport in Italy. The Italian national football team has won the FIFA World Cup four times (1934, 1938, 1982, and 2006), trailing only Brazil (with 5) and tying Germany. Serie A clubs have seen success in the Champions League (formerly the European Cup), the premier European club competition, winning it twelve times. The Italian word for soccer is calcio, "kick," taken from the name of Italy's traditional football games, as opposed to being adapted from the English name football or soccer, as in most other languages. Often, Italian children can be seen playing on the street with friends and relatives.

Among the more popular are:

Gymnastics is a very popular sport in Italy. At the turn of the millennium, Italy showed a growing quality in the discipline, with Susanna Marchesi, finishing 9th at the Individual All Around competition, as well as the team winning 6th place in the 2000 Summer Olympic Games. The Italian team won the silver medal at the 2004 Summer Olympic Games and was 4th place at the 2008 Summer Olympic Games. They collected a string of medals throughout the 2005-2008 Olympic cycle. At the 2009 Rhythmic Gymnastics Championship, in Mie, Japan, the team soared to the first place, winning the gold medal and becoming the new queens, a feat they achieved again at the 2010 Rhythmic Gymnastics Championship in Moscow. The celebration of the Italian team is because they're among the best squads in the world, facing competitions against the Eastern European block of nations: Belarus, Russia, Bulgaria. 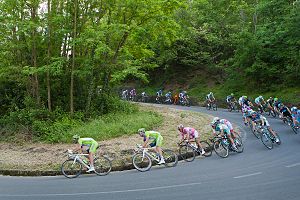 Cycling is a well represented sport in Italy. Italians have won the World Cycling Championship more than any other country, except Belgium. The Giro d'Italia is a world famous long distance cycling race held every May, and constitutes one of the three Grand Tours, along with the Tour de France and the Vuelta a España, each of which last approximately three weeks.

Two of the five 'Monuments', the oldest and most-prestigious one-day races on the cycling calendar, are located in Italy: Milan–San Remo, held in March, and Giro di Lombardia, held in September or October. 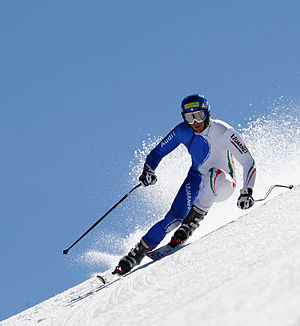 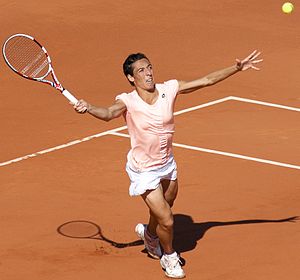 Tennis has a significant following near courts and by television. Italian professional tennis players are almost always in the top 100 world's ranking of male and female players. Beach tennis with paddle racquet was invented by Italians, and is practiced by many people across the country. Italy won the Davis Cup in 1976 and the Fed Cup in 2006, 2009, 2010 and 2013. Italian players such as Sara Errani, Flavia Pennetta and Francesca Schiavone have entered the WTA Top 10 in their careers. Schiavone was the first Italian player to win a Grand Slam singles title, winning the 2010 French Open. The doubles duo of Sara Errani and Roberta Vinci have accomplished a Career Grand Slam in doubles, have been named ITF World Champions 3 years in a row (2012, 2013, 2014) and have ended every season since 2012 as World No. 1. The Italian Open, held since 1930, is one of the oldest and most respected clay tournaments in the world after the French Open.

Athletics is a popular sport in Italy, because Italian World or Olympic champions are very celebrated people. There are many national and international events every year.

Volleyball (pallavolo) is played by a lot of amateur players, and professional players compete in the Italian Volleyball League, regarded as the best and most difficult volleyball league in the world.[citation needed] The male and female national teams are often in top 4 ranking of teams in the world. 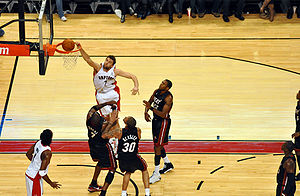 The Italian standout player, Andrea Bargnani, plays with the New York Knicks in the NBA.

Italy is one of the main basketball nations in Europe, along with Spain, Serbia, Greece, Slovenia, Lithuania, Croatia, Russia, Turkey, and France. It has a long and rich tradition in the sport. The Italian national basketball team's best results were gold at Eurobasket 1983 and EuroBasket 1999, as well as silver at the Olympics in 1980 and 2004. Until the 2000s, the Italian League was considered the strongest domestic league outside of North America. It has recently been overtaken by the Spanish ACB, but is still one of the top leagues in Europe, along with the VTB United League in Russia with teams in other nearby nations, the Greek Basket League, the Adriatic League, and the Baltic League. Famous club teams include Olimpia Milano, Virtus Bologna, Pallacanestro Varese, Pallacanestro Cantù, Fortitudo Bologna, Scavolini Pesaro, Benetton Treviso, Montepaschi Siena, Basket Napoli, Virtus Roma, Pallacanestro Trieste, and Juvecaserta Basket.

In Italy, bodybuilding is at the 10th place in the ranking of most popular sports, even considering the high number of people who engage in body building gym, as amateur, just to keep fit themselves.

Combat sports are participated and followed sports. There are many national and international events every year. Fencing is a very successful sport and Italy is one of the most successful fencing countries.

Olympic disciplines, horse racing, equestrian vaulting, and polo are participated and followed sports. There are many national and international events every year.

Baseball sees less activity in Italy than most other sports. Introduced to Italy by American servicemen during World War II, professional baseball leagues were not established until after the war. The Italy national baseball team is traditionally ranked as the second best team in Europe, behind the Dutch national team.[2] Italy's performance during the Olympics has been consistently high for a European team, but is noted for its reliance on American and Latino players of Italian descent. The highest level of play in Italy today is considered to be on par with Class A ball in the United States.[3]

The Italian national cricket team is the team that represents the country of Italy in international cricket matches. They have been an associate member of the International Cricket Council since 1995, having previously been an affiliate member since 1984. The team is administered by the Federazione Cricket Italiana (Italian Cricket Federation). They are currently ranked 25th in the world by the ICC, and are ranked fifth amongst European non-Test teams. The Italian national cricket team has won several European Cricket tournaments, and the popularity of cricket is rising. All the Italian cricketers are home grown cricketers, and they had a well off position in the recent European Indoor Cricket Tournament and the European Cricket Championship. They recently participated in the ICC World Cricket League Division 4. 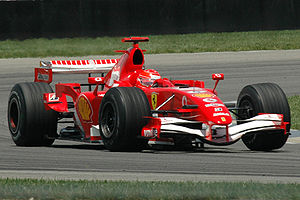 Italians have a great passion for their motorsport, and their F1 team Ferrari has had great success over the many years as they started the sport back in 1950, when the sport first started. They have won 16 constructors' championships and 15 drivers' championships. This team is also the most successful engine manufacturer in the sport, and this shows in their performance in their F1 team and cars. Their greatest driver statistically is Michael Schumacher and their latest F1 drivers are Sebastian Vettel and Kimi Räikkönen.

Golf is played by over 9,000 registered players as of 2007. There are several male and female professional players, with notable current players including Costantino Rocca, the brothers Edoardo, and Francesco Molinari, and teenage star Matteo Manassero. The most important tournament is the Italian Open. The Molinari brothers won the World Cup of Golf in 2009. 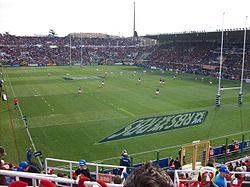 The Stadio Flaminio during a rugby union match in the 2011 Six Nations Championship, between Italy and France, which resulted in an upset victory for Italy.

Rugby union enjoys a good level of popularity, especially in the north of the country. From the 2010–11 season, Italy had two teams in the Magners League, previously an all-Celtic competition, involving teams from Ireland, Scotland, and Wales. To accommodate this move, the country's National Championship of Excellence will effectively become a semi-professional developmental competition. The two Magners League sides will take up Italy's existing places in the elite Europe-wide Heineken Cup tournament, and four Eccellenza sides will compete in the second-tier European Challenge Cup. Italy's national team competes in the Six Nations Championship, and is a regular at the Rugby World Cup. Italy are classed as a tier-one nation by the International Rugby Board.

Rugby union in Italy goes back around a century, and it has been established that British communities brought rugby to Genoa, between 1890 and 1895, with other confirmations of games in Italy around 1909. The society that organised the first games did not survive long and dissolved soon after them.

Rugby union's traditional heartland consisted of the small country towns in the Po Valley, and other parts of Northern Italy.[4] One version says that Italian workers returning from France, particularly the south, introduced the game there, and gave it a significant rural/working class base, which still exists in towns such as Treviso and Rovigo.[4] A demonstration game was also played in 1910, in Turin between Racing Club Paris and Servette of Geneva. French students also introduced the game to Milan University c. 1911. While each of these events has been hailed as the "origin of Italian rugby", it seems that they probably happened more or less simultaneously and independent of one another, and that the introduction of rugby to Italy was a series of events, rather than a single starting point. Whatever the ultimate origins of the game in northern Italy, the region's proximity to the French rugby heartland helped as well.

Rugby league was established prior to the 1950s, and the Italian national rugby league team plays in various international competitions.

Several traditional team ball sports, called sferistici in Italian language, are played in sphaeristerium, or sferisterio in Italian language, so also in open playing fields since 1555 and when Antonio Scaino from Salò regulated pallone col bracciale. There are many modalities of these sports: pallone col bracciale, pallapugno, pallapugno leggera, palla elastica, palla, and tamburello. Professional players compete in the national circuit of tournaments and international championships.

Italy at the Olympics

Main article: Italy at the Olympics

Italy has competed at most of the modern Olympic Games, missing only the 1944 Winter Olympics, because of World War II.

Italy has hosted the Games on three occasions:

Italian athletes have won 549 medals at the Summer Olympic Games, and another 114 medals at the Winter Olympic Games. Italy has won a total of 663 medals, which makes them the sixth most successful country in Olympic history. The Italian National Olympic Committee was created in 1908 and recognized in 1913.