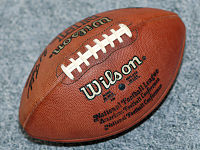 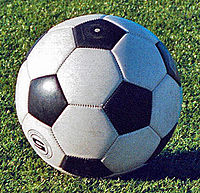 Sports equipment is any object used for sport or exercise. Examples of sports are listed below.

Balls are used for ball games, including footballs.

Examples for exercise include swiss balls, weights, chin-up bars, equipment for the gym. Also protective equipment such as weight lifting belts and bench shirts for weight training and powerlifting. 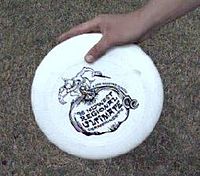 Flying discs are used for various games such as freestyle, disc golf and ultimate. 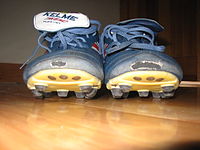 In many games, goals are at each end of the playing field, there are two vertical posts (or uprights) supporting a horizontal crossbar. In some games, such as association football or hockey, the object is to pass the ball or puck between the posts below the crossbar, while in others, such as those based on Rugby, the ball must pass over the crossbar instead.

Nets are used for tennis, volleyball, football, basketball and badminton. A different type of net is used for various forms of fishing.

Racquets are used for racquet sports such as tennis, squash, and badminton. 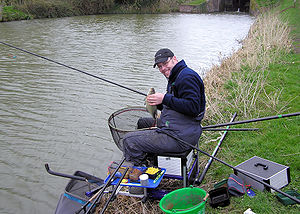 An angler on the Kennet and Avon Canal, England, surrounded by his tackle

Fishing rods and fishing tackle are primarily used for fishing and sport fishing.

Vehicles (sometimes specialized) are used as equipment for some sports, including motor sport, cycling, aeronautics, sailing and hot air ballooning.

Wickets and bails for cricket. Bases are for baseball.