Sports in Chicago include many professional sports teams. Chicago is one of four U.S. cities to have teams from the five major American professional team sports (baseball, football, basketball, hockey, soccer). Chicago has been named as the Best Sports City by Sporting News three times in 1993, 2006, and 2010.

Chicago was a candidate city for the 2016 Summer Olympics but lost to Rio de Janeiro.[1] Upon the USOC reaching a new revenue sharing agreement with the IOC, Chicago has been mentioned as a potential candidate for the 2024 Summer Olympics.[2] Chicago also hosted the 1959 Pan American Games. 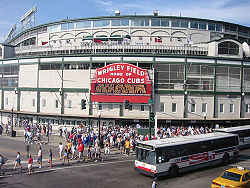 Wrigley Field is the home of the Chicago Cubs. 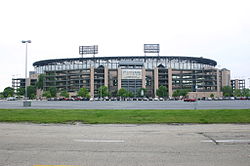 The following is a list of active, professional major-league Chicago sports teams, ranked by attendance:

Chicago is one of four metro areas in the United States that has two Major League Baseball teams, the other three being Los Angeles, New York, and the San Francisco Bay Area, and is one of only two, along with New York, which has both teams in the central city. The city has two Major League Baseball (MLB) teams: the Chicago Cubs of the National League (NL), who play in Wrigley Field on the North Side; and the Chicago White Sox of the American League (AL), who play in U.S. Cellular Field on the South Side. Chicago is the only city that has had more than one MLB franchise every year since the AL began in 1901 (New York only hosted one between 1958 and early 1962, and Los Angeles has only done so since 1961).

The Chicago Cubs of the National League play at Wrigley Field, which is located in the north side neighborhood of Lakeview, the western part of which is commonly referred to as "Wrigleyville."[3] The Cubs' rivalry with the St. Louis Cardinals is one of the most bitter in North American professional sports. The Cubs are the oldest team to play continuously in the same city since the formation of the National League in 1876.[4] The Cubs are the oldest Major League Baseball team to have never changed their city, one of nine out of the sixteen teams to predate expansion that have not changed cities. They have played in Chicago since 1871, and continuously so since 1874 due to the Great Chicago Fire. They have played more games, have more wins and scored more runs than any other team in Major League baseball since 1876.[5] They have won two World Series titles and are fifth among National League teams with 16 pennants, but have the dubious honor of having the two longest droughts in professional sports: They have not won their sport's title since 1908, and have not participated in a World Series since 1945, both records in their respective rights. 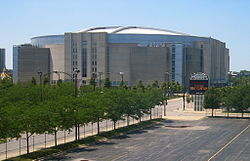 The United Center is the home of the Chicago Bulls and Chicago Blackhawks.

The Chicago Bulls of the National Basketball Association is a professional basketball team. Michael Jordan and Scottie Pippen led the Bulls to six NBA championships in two "threepeats" from 1991–1993 and again from 1996–1998.[6] The new generation of Bulls, known as "The Baby Bulls", emerged in 2005.[7] In 2007, they swept the defending champs, the Miami Heat. In 2011, led by league MVP Derrick Rose, the Bulls made it to the Eastern Finals, losing to the Miami Heat.

Chicago is home to the Chicago Sky of the Women's National Basketball Association. 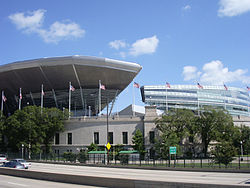 Soldier Field is the home of the Bears.

The Chicago Bears of the National Football League play at Soldier Field. The Bears' history includes many NFL personalities, including owner George Halas, players Dick Butkus, Gale Sayers, Walter Payton, and coach Mike Ditka. The Bears are one of the original teams of the NFL, founded by Halas in 1919 in Decatur, Illinois. They currently have the most players inducted into the Pro Football Hall of Fame with 26.[8] In 1985, the Bears won Super Bowl XX 46-10 over the New England Patriots.[9] In the 2006 season, the Bears once again made it to the Super Bowl, but lost 29-17 to the Indianapolis Colts.[10] They were led by coach Lovie Smith.

The Bears' rivalry with the Green Bay Packers dates back the 1920s, and is one of the most intense in American professional sports.[11] The Bears have other regional and divisional rivalries with the Minnesota Vikings and the Detroit Lions.[12]

The Bears play their home games at Soldier Field, named after "The men and women of the armed forces". It is located next to the shores of Lake Michigan, on Lake Shore Drive. Soldier Field was an aging stadium and was in dire need of renovation by the end of the 20th century. In 2003, the stadium re-opened after an extensive renovation, which increased the number of luxury boxes and dramatically improved the game day experience for Bears fans. However, because of this renovation, the stadium lost its National Historic Landmark designation on February 17, 2006.

The Chicago Blackhawks of the National Hockey League is the city's professional ice hockey team, and are an Original Six team. The Blackhawks won the Stanley Cup in 1934, 1938, 1961, 2010, 2013,[13] and again in 2015.[14] With 3 Stanley cup wins within 6 years(2010, 2013 and 2015) gave the Blackhawks the title of a Dynasty. The Blackhawks receive national attention for the intense rivalries with the Detroit Red Wings, also an Original Six team.[15] Other rivalries include the Vancouver Canucks, St. Louis Blues (former Norris Division rivals), and the Nashville Predators. Some well-known players include: Stan Mikita, Tony Esposito, Bobby Hull, Keith Magnuson, Glenn Hall, Denis Savard, Steve Larmer, Jeremy Roenick, Chris Chelios, and Ed Belfour.

The Chicago Fire, a member of Major League Soccer, have won one MLS Cup and four U.S. Open Cups since they entered the league in 1998. The Fire won their sole MLS Cup in 1998, their inaugural season, led by head coach Bob Bradley, who later went on to coach the U.S. national soccer team.[16] The Fire have played since 2006 at Toyota Park, a soccer-specific stadium located in the Chicago suburb of Bridgeview near Midway Airport. The Fire have historically drawn an attendance average of over 15,000 fans per game.[17] The Fire originally played at Soldier Field,[18] also spending parts of two seasons at Cardinal Stadium in Naperville. Some notable former players include Cuauhtémoc Blanco from Mexico, Brian McBride from the USA, and Peter Nowak from Poland – a demonstration of the team's international flavor.

Chicago is home to the Chicago Red Stars of the National Women's Soccer League.

The following is a list of active minor league, semi-pro, and amateur Chicago sports teams, ranked by year of establishment:

The Chicago metropolitan area is home to one Major League Affiliate Team: the Kane County Cougars, a Class-A Affiliate of the Chicago Cubs minor league baseball team that plays in suburban Geneva, Illinois as part of the Midwest League; 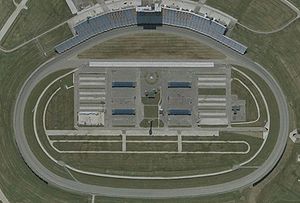 A view of Chicagoland Speedway

The Chicago Rush has been a member of the Arena Football League since 2001, and won ArenaBowl XX, playing in suburban Rosemont, although they now played in Rockford, as of 2013. The team has been defunct since 2013.

The Arena Football League front office is based in Chicago.

Chicago Stockyarders rugby league team played in 2010's AMNRL's War at the Shore in a 7s match against the Northern Raiders.[23]

The Chicago area has also played host to the WWE's WrestleMania multiple times, most recently for WrestleMania 22.[24] Five-time world champion CM Punk is a Chicago native who still lives in the city. Chicago has also hosted major professional wrestling matches, including WrestleMania 22, and several other pay-per-view events, such as Money in the Bank in 2011, Extreme Rules in 2012, and WWE Payback in 2013.[25][26][27]

Starting just off Navy Pier is the Chicago Yacht Club Race to Mackinac, a 333-mile (289 nmi; 536 km) offshore yacht race held each July. It is the oldest annual freshwater distance race in the world. 2015 marks the 107th running of the "Mac".[28]

Chicago is home to two all-female roller derby leagues; Chicago Outfit Roller Derby and Windy City Rollers of the Women's Flat Track Derby Association.[29] As of November 2013, Windy City is ranked 8th worldwide out of over 175 WFTDA members,[30] hosted the WFTDA Championship in 2010,[31] and play their home games at UIC Pavilion.[32] The Chicago area is also home to the Chicago Red Hots, an amateur roller derby club affiliated with USA Roller Sports under the US Olympic Committee,[33] who play at the Cicero Stadium. The Red Hots participated in the 2013 National Championship where they placed 4th in the nation.[34]

Seven NCAA Division I schools reside in the Chicago metropolitan area. The DePaul Blue Demons, Loyola Ramblers, Chicago State Cougars, and UIC Flames are all within the city limits; all also play their main revenue sport of men's basketball in the city except for DePaul, which plays at the Allstate Arena in Rosemont.

The Northwestern Wildcats, Northern Illinois Huskies, and Valparaiso Crusaders are all programs that play in the surrounding area. Northern Illinois is a Division I Bowl Subdivision school along with Northwestern, which is the lone Power Five school in the Chicago area. Although the Illinois Fighting Illini are located two and a half hours south, they have a huge following in Chicago.

The Big Ten Conference is headquartered in Rosemont after relocating from another suburb, Park Ridge, in 2013.[35]

After a months' long process that saw the elimination of several American and international cities, Chicago was selected on April 14, 2007, to represent the United States internationally in the bidding for the 2016 Summer Olympics.[36] The International Olympic Committee eventually shortlisted four of the seven applicant cities, where Chicago remained, before Rio de Janeiro was elected as the host in 2009.[37] Chicago had previously hosted the 1959 Pan American Games. Chicago was selected to host the 1904 Summer Olympics, but they were transferred to St. Louis to coincide with the Louisiana Purchase Exposition.[38]

The area is home to the Chicagoland Speedway, which is based in Joliet.[39] The track currently hosts four NASCAR races (GEICO 400, STP 300, Dollar General 300, American Ethanol 225). The track formerly held the Peak Antifreeze Indy 300.[40]