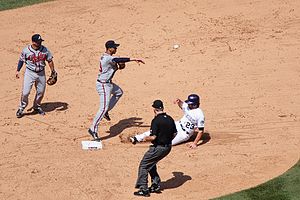 The Atlanta Braves are a Major League Baseball (MLB) team that moved to Atlanta in 1966 from Milwaukee where they were known as the Milwaukee Braves.[1] The Braves play their home games at Turner Field in Atlanta since 1997, and the team is scheduled to move into SunTrust Park in suburban Cobb County in 2017; they previously played at Atlanta-Fulton County Stadium from 1966 to 1996. They won the World Series in 1914 (as the Boston Braves), 1957 (as the Milwaukee Braves), and 1995 (as the Atlanta Braves). Braves players in the Baseball Hall of Fame include Hank Aaron, Orlando Cepeda, Tom Glavine, Greg Maddux, Eddie Mathews, Phil Niekro, Gaylord Perry, John Smoltz, Warren Spahn, Bruce Sutter and Hoyt Wilhelm. Two former Braves managers have been inducted to the Hall in that role, Bobby Cox and Joe Torre, although Torre's induction was mainly for his accomplishments with the New York Yankees. Mathews also served as a Braves manager.

The Rome Braves, previously known as the Macon Braves, are a Class-A minor league affiliate of the Atlanta Braves. In 2003, the team moved from Macon to Rome. Their home games are played at State Mutual Stadium, which opened April 11, 2003. The stadium seats 5,105 and features a lawn seating area known as "Applebee's Home Run Hill." Former Atlanta Braves alumni include Brian McCann, who was a Rome Brave in 2003.

The Augusta GreenJackets have played in the Class A South Atlantic League since 1988, and have been affiliated with the San Francisco Giants since 2005. The Savannah Sand Gnats played in the same league from 1984 to 2015, most recently as affiliates of the New York Mets (2007–2015), but have since relocated to Columbia, South Carolina as the Columbia Fireflies. 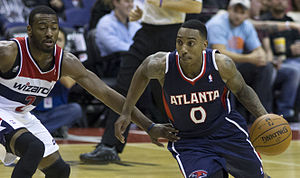 The Atlanta Hawks are a National Basketball Association (NBA) team founded in 1949 and play their home games at Philips Arena since 1999; the Hawks previously played at Alexander Memorial Coliseum (now Hank McCamish Pavilion) from 1968 to 1972, the Omni Coliseum from 1972 to 1997, and the Georgia Dome from 1997 to 1999. The Hawks have won one Championship, four Conference titles and fourteen Division titles. Notable current and former Hawks include Walt Bellamy, Cliff Hagan, Connie Hawkins, Bob Houbregs, Moses Malone, Pete Maravich, Ed Macauley, Bob Pettit, Lenny Wilkens and Dominique Wilkins.[2]

The Atlanta Dream has played in the Women's National Basketball Association since 2008. They play their home games at Philips Arena. The colors are white, sky blue, red.[7] 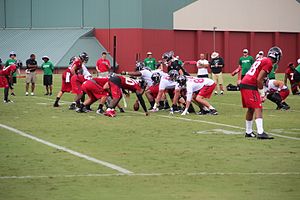 The Atlanta Falcons are a National Football League (NFL) team founded as an expansion team in 1966.[8] They have played their home games at the Georgia Dome in Atlanta since 1992 and are scheduled to move into Mercedes-Benz Stadium in 2017; prior to playing at the Georgia Dome, they played at Atlanta-Fulton County Stadium from 1966 to 1991. The Falcons have won five Division Championships in 1980, 1998, 2004, 2010, and 2012 and one Conference Championship in 1998. Notable current and former players include Eric Dickerson, Tommy McDonald, William Andrews, Jeff Van Note, Jessie Tuggle, Mike Kenn, Marion Campbell, Dan Reeves, Greg Brezina, Ray Buchanan, Buddy Curry, T.J. Duckett, Bill Fralic, Wallace Francis and the Bill Goldberg.

Georgia has also been home to several arena football teams. Two different teams known as the Georgia Force played in the Arena Football League (AFL). The original version arrived in Georgia after the 2001 season, having relocated from Nashville, Tennessee. This team initially played at Philips Arena, but later moved its home games to the suburb of Duluth. This version of the Force folded along with the league after the 2008 season. The AFL was relaunched in 2010, and a new version of the Force arrived in 2011 when the Alabama Vipers relocated from Huntsville. The new Force played the 2011 and 2012 seasons before folding. Two other teams were founded in 2006. They are the Atlanta Thoroughbreds, a National Indoor Football League(NIFL) team and the Augusta Colts, an American Indoor Football League team (except for the 2007 season when they were part of the World Indoor Football League (WIFL)). The last Georgia team to be founded was the Columbus Lions in 2007. The Lions were founded as a WIFL team, but have since joined the American Indoor Football Association(AIFA).[9]

The Atlanta Xplosion are a Women's Professional Football League team. They have recently won the league's 2006 Championship.[10] 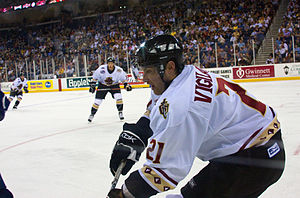 Hockey's history in Georgia goes back to the 1970s with the Atlanta Flames, who played in the state until 1980 when they were relocated to Calgary. It was not until October 2, 1999 that hockey formally returned with the Atlanta Thrashers' first game against the New Jersey Devils.[11] On May 31, 2011 the Thrashers were sold to True North Sports and Entertainment. It was announced the team would move to the MTS Centre in Winnipeg and return the Winnipeg Jets name to the NHL, resurrecting the name of the city's previous NHL team that departed for Phoenix in 1996. The Thrashers played their home games at the Philips Arena in Atlanta. The Thrashers did not appear in the Stanley Cup Finals. They only won one division title during the 2006-07 NHL season and were swept in the first round by the New York Rangers.

Currently, the ECHL has only one operating team in Georgia. The Gwinnett Gladiators play all of their homes games at Infinite Energy Arena in Duluth. The team, formerly the Mobile Mysticks, moved to Gwinnett County and officially started play in 2003 as the Gwinnett Gladiators. The team changed their name to Atlanta Gladiators in 2015. The Augusta Lynx were first formed in 1998, but due to financial concerns were forced to cease operations halfway through the 2008 season. The Lynx played their home games at James Brown Arena.

The Columbus Cottonmouths and the Macon Mayhem are currently the only teams in Georgia that are part of the Southern Professional Hockey League. The Cottonmouths were founded in 1996.[12] The Mayhem were founded in 2015 after the Augusta RiverHawks suspended operations for the 2013–14 season because of a failure of their home arena's ice system and subsequently relocated to Macon, Georgia after going dormant for two seasons.

Augusta FireBall United, also known as Augusta FireBall, was an American soccer team that was founded in 2005. The team was a member of the Premier Development League (PDL), the fourth tier of the American Soccer Pyramid, until 2006, when the team left the league and the franchise was terminated. They played their home games at Patriots Park in Augusta, Georgia.

The Atlanta Beat was an American professional soccer club based in Atlanta, Georgia. The team joined Women's Professional Soccer (WPS) as an expansion team in 2010, and played its home games at Kennesaw State University Soccer Stadium, the result of a public-private partnership between the team and Kennesaw State University. The club succeeded the former Atlanta Beat of the defunct Women's United Soccer Association. The Beat folded along with WPS after the 2012 season, and the Atlanta area does not have a team in WPS' effective successor, the current National Women's Soccer League.

Atlanta was awarded a Major League Soccer expansion team in April 2014. Atlanta United FC is expected to begin play in the league in 2017.

The Masters Tournament, played in Augusta at Augusta National Golf Club in April is one of four major golf tournaments played in the United States. The tournament was created in 1931 by Bobby Jones and Clifford Roberts, a financier from New York. The course was designed by golf course architect Alister MacKenzie.[14] Notable golfers from Georgia include Atlanta native Jones, noted as the greatest amateur golfer ever,[15] Davis Love III of Sea Island[16] and Tommy Aaron of Gainesville.[17] 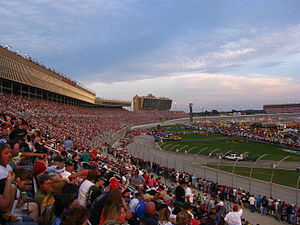 Georgia is home to approximately twenty-two race tracks and drag strips. Some of the twenty-two tracks in Georgia are the Atlanta Motor Speedway, Road Atlanta (where the Petit Le Mans is held), Atlanta Dragway, Dixie Speedway and Roebling Road Raceway.[18] One of the most famous racers to come from Georgia is Bill Elliott.[19]

Many observers consider Dawsonville one of the birthplaces of NASCAR because so many individuals involved in the sport were from that city. Notable racers from Dawsonville include, Bill Elliott, Roy Hall and Lloyd Seay.[20] Since 1951 Georgia tracks have hosted two to eight races in NASCAR's elite division.[20] Dawsonville is home to the Georgia Racing Hall of Fame.[20] 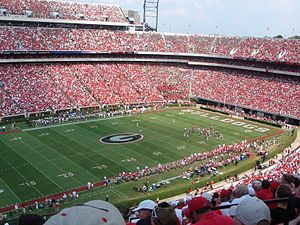 Inside Sanford Stadium during a home game

The state of Georgia has twenty-eight schools competing in the National Collegiate Athletic Association (NCAA) and ten schools in the NAIA.

There are seven Division I institutions recognized by the NCAA.

The remaining three field football teams in the second-tier Division I FCS:

A total of 16 institutions are members of NCAA Division II:

LaGrange College is in the NCAA Division III with 14 sports, and competes as a member of the Southern Collegiate Athletic Conference. The school's most successful athletic program is its men's golf team, which is perennially among the nation's best.

Georgia has seven other institutions in Division III. They are: 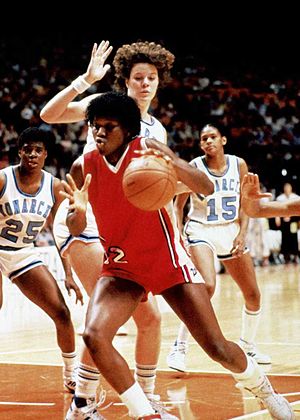 Several people from Georgia, or from Georgia schools, have received gold medals at the Olympics over the years. Some of those gold medalists are: