Spyridon-Filiskos Samaras (also Spyros, Spiro Samara; Greek: Σπυρίδων Σαμάρας) (29 November 1861 – 7 April 1917) was a Greek composer particularly admired for his operas who was part of the generation of composers that heralded the works of Giacomo Puccini. His compositions were praised worldwide during his lifetime and he is arguably the most internationally appreciated Greek composer before Dimitri Mitropoulos.

Samaras was born in Corfu, where, as a young man, he studied with Spyridon Xyndas (Σπυρίδων Ξύνδας). From 1875 to 1882 he studied at the Athens Conservatory with Federico Bolognini, it and Enrico Stancampiano. His first opera Torpillae (now lost) was premiered in Athens in 1879. He went to Paris in 1882 to study at the Paris Conservatoire and became a favorite of Jules Massenet. His other instructors included Léo Delibes, Théodore Dubois, and Charles Gounod. He worked successfully as a composer in Paris for three years and then migrated to Italy in 1885. 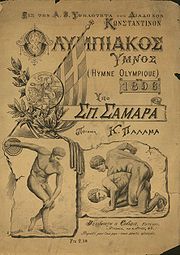 Samaras quickly became an important figure in the opera scene in Italy. His opera Flora mirabilis première in Milan in 1886 and in 1888 Medgé was successfully staged at the Teatro Costanzi in Rome with French opera star Emma Calvé in the title role. Samaras became closely associated with Edoardo Sonzogno, a Milanese publisher. Sonzogno founded the Teatro Lirico Internazionale and chose Samaras' La martire for the theater's opening on 22 September 1894. The opera had premiered previously that year in Naples and is based on a libretto by Luigi Illica with many naturalistic elements, which gave space to Samaras musical personality for an equal treatment.

Samaras' works enjoyed wide distribution; his operas were staged in Paris, Monte Carlo, Cologne, Berlin, Vienna, Malta, Bucharest, Constantinople, Smyrna, Alexandria, Cairo, and of course Greece and Italy[citation needed]. He wrote fifteen stage works, the last three on texts by Paul Milliet; Storia d'amore o La biondinetta (1903), Mademoiselle de Belle-Isle (1905) and Rhea (1908). He returned to Greece in 1911, thinking that he would be appointed director of the Athens Conservatoire[citation needed]. However he was not, partly because of the 'National School' controversy. He supported himself by composing operettas aiming at satisfying a variety of audiences, rather than continuing in his usual creative vein. His last opera, Tigra, although started about this time and containing some of his best music, was never finished.

Samaras is known for composing the Olympic Anthem, on lyrics by Kostis Palamas. The Anthem was first performed during the opening ceremony of the 1896 Summer Olympics, the first modern Olympic Games. It was declared the official anthem of the Olympic movement by the International Olympic Committee in 1958 and has been used at every opening ceremony since the 1960 Winter Olympics. 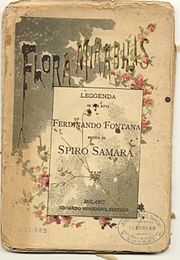