Vojtěch (help·info), Polish: Wojciech, Latin: Adalbertus, Voitecus; c. 956 – 23 April 997), was a Bohemian missionary and Christian saint. He was the Bishop of Prague and a missionary to the Hungarians, Poles, and Prussians, who was martyred in his efforts to convert the Baltic Prussians to Christianity. He is the composer of Bogurodzica, the oldest known Polish hymn.[1] St. Adalbert was later declared the patron saint of Bohemia, Poland, Hungary and the former polity of Prussia.

Adalbert, named Vojtěch at birth, was born into a noble Czech family, to Prince Slavník and his wife Střezislava in Libice nad Cidlinou, Bohemia. His father was the rich and independent ruler of the Zličan principality that rivaled Prague (see Slavník's dynasty). Adalbert had five natural brothers: Soběslav (Slavnik's heir; died 1004), Spytimír, Pobraslav, Pořej, and Čáslav, and a half-brother named Radim of his father's liaison with another woman. Radim chose a clerical career as did Adalbert, and took the name Gaudentius. Having survived a grave illness in childhood, his parents decided to dedicate Vojtěch to the service of God.[2] Adalbert was well educated, having studied for approximately ten years (970-80) in Magdeburg under the tutelage of St. Adalbert of Magdeburg.[3] The young Vojtěch took his tutor's name "Adalbert" at his Confirmation. 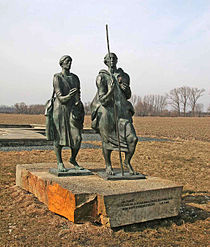 In 981 St. Adalbert of Magdeburg died, and his young protege Adalbert returned to Bohemia. Later Bishop Dietmar of Prague ordained him a Roman Catholic priest. In 982, Bishop Dietmar died, and Adalbert, despite being under canonical age, was chosen to succeed him as Bishop of Prague.[3] Amiable and somewhat worldly, he was not expected to trouble the secular powers by making excessive claims for the Church.[4] Although Adalbert was from a wealthy family, he avoided comfort and luxury, and was noted for his charity and austerity. After six years of prayer and preaching, he had made little headway in evangelizing the Bohemians, who maintained deeply embedded pagan beliefs.

Adalbert opposed the participation of Christians in the slave trade and complained of polygamy and idolatry, which were common among the people. Once he started to propose reforms he was met with opposition from both the secular powers and the clergy. His family refused to support Duke Boleslaus in an unsuccessful war against Poland. Adalbert was no longer welcome and eventually forced into exile.[3] In 990 he went to Rome. He lived as a hermit at the Benedictine monastery of Saint Alexis. Five years later, Boleslaus requested that the Pope send Adalbert back to Prague, in hopes of securing his family's support. Pope John XV agreed, with the understanding that Adalbert was free to leave Prague if he continued to encounter entrenched resistance.[2] Adalbert returned as bishop of Prague, where he was initially received with demonstrations of apparent joy.[5] and founded a monastery in Břevnov near the City, it being the first monastery in the Czech territory.

In 995, the Slavniks' former rivalry with the Přemyslids, who were allied with the powerful Bohemian clan of the Vršovcis, resulted in the storming of the Slavnik town of Libice nad Cidlinou, led by the Přemyslid Boleslaus II the Pious. During the struggle four or five of Adalbert's brothers were killed. The Zličan principality became part of the Přemyslids' estate. Adalbert unsuccessfully attempted to protect a noblewoman caught in adultery. She had fled to a convent, where she was killed. In upholding the right of sanctuary, Bishop Adalbert responded by excommunicating the murderers.[2] Butler suggests that the incident was orchestrated by enemies of his family.[4]

After this, Adalbert could not safely stay in Bohemia and escaped from Prague. Strachkvas was eventually appointed to be his successor. However, Strachkvas suddenly died during the liturgy at which he was to accede to his episcopal office in Prague. The cause of his death are still ambiguous. The Pope directed Adalbert to resume his see, but believing that he would not be allowed back, he requested a brief as an itinerant missionary.[4]

Adalbert then traveled to Hungary and probably baptized Géza of Hungary and his son Stephen in Esztergom. Then he went to Poland where he was cordially welcomed by then-Duke Boleslaus I and installed as Bishop of Gniezno.[5]

Mission and Martyrdom in Prussia 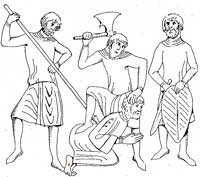 The execution of St. Adalbert by the pagan Prussians, Gniezno Doors panel

Adalbert again relinquished his diocese, namely that of Gniezno, and set out as a missionary to preach to the inhabitants near Prussia.[6] Bolesław I, Duke (and, later, King) of Poland, sent soldiers with Adalbert on his mission to the Prussians. The Bishop and his companions, including his half-brother Radim (Gaudentius), entered Prussian territory and traveled along the coast of the Baltic Sea to Gdańsk.

Success attended his efforts at first, but his imperious manner in commanding the people to abandon paganism irritated them, and at the instigation of one of the pagan priests he was murdered on 23 April 997[5] on the Baltic Sea coast east of Truso (currently the city of Elbląg) or near Tenkitten and Fischhausen. It is recorded that his body was bought back for its weight in gold by King Boleslaus I of Poland. 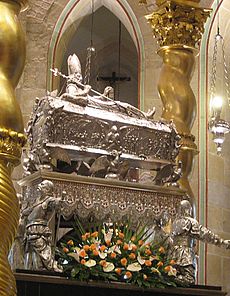 A few years after his martyrdom, Adalbert was canonized as St. Adalbert of Prague. His life was written in Vita Sancti Adalberti Pragensis by various authors, the earliest being traced to imperial Aachen and the Bishop of Liège, Notger von Lüttich, although it was previously assumed that the Roman monk John Canaparius wrote the first Vita in 999. Another famous biographer of St. Adalbert was St. Bruno of Querfurt who wrote a hagiography of him in 1001-4.

Notably, the Přemyslid rulers of Bohemia initially refused to ransom St. Adalbert's body from the Prussians who murdered him, and therefore it was purchased by Poles. This fact may be explained by the Saint belonging to the Slavniks family which was rival to the Přemyslids. Thus St. Adalbert's bones were preserved in Gniezno, which assisted Boleslaus I of Poland in increasing Polish political and diplomatic power in Europe.

According to Bohemian accounts, in 1039 the Bohemian Duke Břetislav I looted the bones of St. Adalbert from Gniezno in a raid and translated them to Prague. According to Polish accounts, however, he stole the wrong relics, namely those of St. Gaudentius, while the Poles concealed St. Adalbert's relics, and consequently remain in Gniezno. In 1127 his severed head, which was not in the original purchase according to Roczniki Polskie, was discovered and translated to Gniezno. In 1928, one of the arms of St. Adalbert, which Bolesław I had given to Holy Roman Emperor Otto III in 1000, was added to the bones preserved in Gniezno. Therefore, today St. Adalbert has two elaborate shrines in the Prague Cathedral and Royal Cathedral of Gniezno, each of which claims to possess his relics, but which of their bones are his authentic relics is unknown. For example, pursuant to both claims the Saint has two skulls. The one in Gniezno was stolen in 1923.

The massive bronze doors of Gniezno Cathedral, dating from around 1175, are decorated with eighteen reliefs of scenes from the Saint's life. They are the only Romanesque ecclesiastical doors in Europe depicting a cycle illustrating the life of a saint and therefore are a precious relic documenting Adalbert's martyrdom.

23 April 1997 was the one thousandth anniversary of St. Adalbert's martyrdom. It was commemorated in Poland, Czech Republic, Germany, Russia, and other nations. Representatives of Roman Catholic, Greek Orthodox, and Evangelical churches traveled on a pilgrimage to the Saint's tomb located in Gniezno. Pope St. John Paul II visited the cathedral and celebrated a liturgy there in which heads of seven European nations and approximately one million faithful participated.

A ten-meter cross was erected near the village of Beregovoe (formerly Tenkitten), Kaliningrad Oblast where St. Adalbert is thought to have been martyred by the Prussians.

Places Named for Him in the United States