From Infogalactic: the planetary knowledge core
Jump to: navigation, search
For the seminary in Košice, see St Charles Borromeo Seminary.

St. Charles Borromeo Seminary is the seminary of the Roman Catholic Archdiocese of Philadelphia.[1] Named for Saint Charles Borromeo, it is located just outside the city, at City Avenue and Lancaster Pike, in Lower Merion Township, Pennsylvania.

The seminary is accredited by both the Commission on Higher Education of the Middle States Association of Colleges and Schools, and the Association of Theological Schools in the United States and Canada.

It consists of four divisions: College, Theology, Graduate School of Theology and Permanent Diaconate. Potential candidates for the priesthood pursue a program which consists of a four-year liberal arts curriculum followed by a four-year curriculum within the professional school of theology. The seminary offers the degrees of Bachelor of Arts, Master of Divinity, and Master of Arts.

The current rector is the Most Reverend Timothy C. Senior and the current Vice Rector is Reverend Fr. Joseph Bongard. 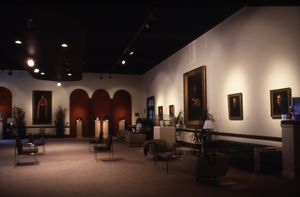 The Eakins Room at the seminary contains six portraits by Thomas Eakins.

St. Charles Borromeo Seminary was founded in 1832 by Bishop Francis Kenrick, the third Bishop of Philadelphia. The seminary was initially located at the home of Bishop Kenrick on Fifth Street in Philadelphia. In 1838, it was chartered to grant academic degrees. Circumstances required the subsequent relocation of the seminary to the northwest corner of Fifth and Prune Streets, then to Saint Mary's Rectory on Fourth Street, and eventually to the southeast corner of Eighteenth and Race Streets in Philadelphia before moving, in 1871, to its present home in Overbrook.

In 1863 Bishop James F. Wood made the first of three purchases of the property that today comprises the campus of Overbrook. In September, 1871, the preparatory college and theology divisions were reunited on the present campus. In December, 1875, the Chapel of the Immaculate Conception was formally dedicated by Archbishop Wood (who reached that rank when Philadelphia became an archdiocese in 1875). Subsequent Archbishops of Philadelphia have initiated improvements on the Seminary campus. Archbishop Patrick J. Ryan began the building of the library. Archbishop Edmond Prendergast oversaw the building of a student residence hall. Dennis Cardinal Dougherty sponsored the construction of the college building. John Cardinal O'Hara added an indoor swimming pool to the physical assets of the Seminary. In 1971, under the leadership of John Cardinal Krol, a residence hall and multi-purpose building dedicated to Saint John Vianney was constructed. In 2005, the Anthony Cardinal Bevilacqua Research Center was established at the Ryan Memorial Library. The building was completely renovated in the process. The buildings that make up the current Theology Division along with the Ryan Memorial Library stand at the western end of campus. The Seminary College is located at the eastern end.

For an eleven-year period the preparatory division of the seminary was located at Glen Riddle in Delaware County. The preparatory program consisted at that time of what is equivalent to today's last two years of high school and four years of college. The high school program was discontinued in 1968. In 1999, an alumnus praised St. Charles for its liturgical conservatism compared to some other US seminaries.[2] After his successor, Cardinal Justin Francis Rigali, was named in 2003, Cardinal Anthony Joseph Bevilacqua, the former Archbishop of Philadelphia, lived here in his retirement.

Pope Francis stayed in St. Charles during his visit to Philadelphia in 2015.[3][4]