St. John's Episcopal Church, Lafayette Square is a historic Greek Revival Episcopal church designed by Benjamin Latrobe and located at 16th and H Streets NW, in Washington, D.C. It is across Lafayette Square from the White House. Every sitting president since James Madison has attended the church at least once.[2] 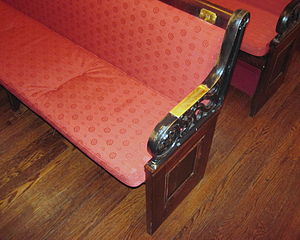 Beginning with James Madison, every president has been an occasional attendee at St. John's due both to the overwhelmingly Episcopal religious affiliation of U.S. presidents and the church's proximity to the Executive Mansion. Perhaps the most devoted presidential attendee was Abraham Lincoln, who habitually joined evening prayer throughout the Civil War from an inconspicuous rear pew. St. John's is popularly nicknamed the "Church of the Presidents". President James Madison established the tradition of a "President's pew," selecting pew 28 for his private use in 1816.[3] During a renovation in 1843, the pews were renumbered, and the President's pew became pew 58.[3] President John Tyler asked that pew 58 be assigned to him, and paid for its use in perpetuity by presidents of the United States.[3] Additional renovations in 1883 renumbered the seat to pew 54, and this pew has remained reserved for the President's use when in attendance.[3] Although the "President's pew" is open for the use of any U.S. president who wishes to worship at the church, during weddings and other events the President usually sits in the front pew as a matter of protocol.[3]

President Chester A. Arthur commissioned a memorial window for his wife, Ellen Lewis Herndon Arthur who died in 1880, which was displayed in the church's south transept visible from the White House and lighted from within at his behest.[4] 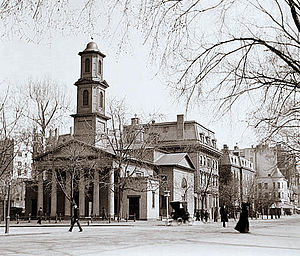 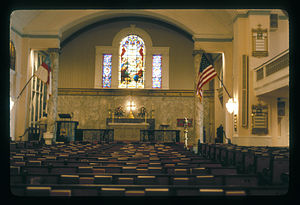 In 1966, St. John's Church was placed on the National Register of Historic Places by the U.S. Department of the Interior. Organized as a parish in 1815, it was named for Saint John, the Evangelist. The building opened and the first service was held at St. John's Church on October 27, 1816. The Rev. William Dickinson Hawley served as its rector from 1817 to 1845, also serving as Chaplain of the Senate.[3] The church building was designed by Benjamin Latrobe, architect of the U.S. Capitol Building, and is constructed of stucco-covered brick, taking the form of a Greek cross. In 1820, the portico and tower were added.[5]

The bell in St. John's steeple weighs nearly 1,000 pounds. It was cast by Paul Revere's son, Joseph, at his Boston foundry in August 1822 and installed at St. John's on November 30, 1822. President James Monroe authorized a $100 contribution of public funds toward the purchase of this church bell, which also served as an alarm bell for the neighborhoods and public buildings in the vicinity of the church. St. John's bell is one of two Revere bells in Washington, both cast and installed in 1822. However, of the two, St. John's bell is the only one that has been in continuous service since its installation.[6] According to at least two accounts, whenever the bell tolls because of the death of a notable person, six ghostly men in white robes appear in the President's pew at midnight and then vanish.[7]

Artwork in the church includes two sculptures by Jay Hall Carpenter, a chapel cross in polished brass, and Ascent Into Heaven, a 3/4 lifesize bronze angel and child overlooking the church's columbarium.