From Infogalactic: the planetary knowledge core
Jump to: navigation, search
For the 1938 film, see Sidewalks of London. 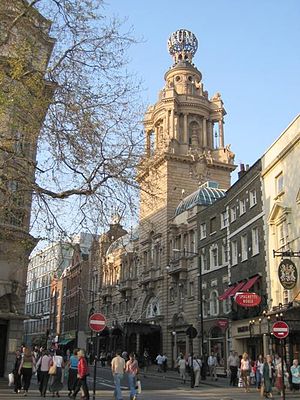 St. Martin's Lane viewed from the south with the Coliseum Theatre on the right

St. Martin's Lane is a street in Covent Garden[1] in Central London, which runs from the church of St. Martin-in-the-Fields, after which it is named, near Trafalgar Square northwards to Long Acre.

A narrow street with relatively little traffic, St. Martin's Lane is home to the English National Opera at the Coliseum Theatre, as well as two other theatres, the Duke of York's Theatre and the Noel Coward Theatre, second-hand bookshops, antique dealers and high class gentlemen's outfitters. It also has a large number of cafes and a music shop aimed at opera and theatre goers. The theatrical agency set up by Peggy Ramsay in 1953 was located in Goodwin's Court, an alley leading off the lane. Two pedestrian alleys, St Martins Court and Cecil Court, connect St Matins Lane with Charring Cross Road have similar usage

In the 18th-century St. Martin's Lane was noted for the Academy founded by William Hogarth and later for premises of cabinet-makers and "upholsterers" such as Thomas Chippendale, who moved to better premises there in 1753, Vile and Cobb, and William Hallett around the corner in Newport Street.

St. Martin's Lane was the setting of a 1938 movie of the same name starring Vivien Leigh, Rex Harrison and Charles Laughton, which paved the way for the Broadway musical Busker Alley. It is also prominently featured throughout the 1961 film Victim, also featuring scenes in the Salisbury.

The Salisbury was built as part of a six-storey block around 1899 on the site of an earlier pub that had been known under several names, including the Coach & Horses and Ben Caunt's Head; it is both Grade II listed, and on CAMRA's National Inventory, due to the quality of the etched and polished glass and the carved woodwork.[2]