St. Mary's County comprises the California-Lexington Park, MD Metropolitan Statistical Area, which is also included in the Washington-Baltimore-Arlington, DC-MD-VA-WV-PA Combined Statistical Area. It is part of the Southern Maryland region. The county was the home to the first Maryland Colony, the first capitol of the Colony of Maryland and is considered to be the birthplace of religious freedom in North America.[4]

It is also home to the Patuxent River Naval Air Station and also St. Mary's College of Maryland.

St. Mary's County has been traditionally known for its unique and historic culture of Chesapeake Bay tidewater farming, fishing and crabbing communities. But with the advent of the military bases, growth of an extensive defense contractor presence and the growth of St. Mary's College of Maryland, as well as increasing numbers of long-distance Washington D.C. commuters, it has been undergoing a decades-long transformation.[5] The county's population has doubled since 1970.[5]

The settlement of Lord Baltimore's Maryland began with the arrival of passengers from England at St. Clement's Island in the Potomac River in what is now southwestern St. Mary's County on March 25, 1634 (the anniversary of this landing being annually celebrated as Maryland Day). The passengers arrived in two vessels, the Ark and the Dove, which had set sail from the Isle of Wight on November 22, 1633. The county is also home to the first Catholic Mass celebrated in one of the original thirteen colonies -after they'd become English colonies (masses were said in 1526-7 at San Miguel de Gualdape).[6]

Due to the small size of the Island, and its lack of resources, the intention was never to make a permanent settlement there. Instead it was used as a base for the settlers while scouting for a more suitable site. This was how a bluff overlooking the nearby St. Marys River was chosen for numerous reasons, and became the site of the first permanent settlement. It would soon be named "St. Marys City".

St. Mary's City, Maryland is the site of the first Maryland Capitol and remained so for over 50 years until 1695, when the capitol was moved to Annapolis.

Today Historic St. Mary's City is a major attraction in Maryland with four museums, a reconstructed colonial village and the reconstructed Maryland Dove settlers ship. It is also now one of the top archeological research sites in North America.

St. Mary's County was the first county established in Maryland, in 1637, probably by an order of the Governor.

In 1649, Lord Baltimore, with the Maryland General Assembly, passed the Maryland Toleration Act, which provided religious freedom for any (Christian) sect, and which was the first law of its kind in the New World.[7] There is a statue in St. Mary's City commemorating this event, along with extensive museums, a reconstructed Colonial town, living history actors, and a replica of the Maryland Dove

St. Mary's County is where Francis Scott Key, the author of a poem which became The Star Spangled Banner, and professional wrestler Scott Hall grew up. St. Mary's County was the birthplace of Dashiell Hammett, and Orlando "Tubby" Smith, head basketball coach at the University of Minnesota. The largest employer is Patuxent River Naval Air Station and its related aerospace contract firms. There are both Amish and Mennonite communities who follow traditional ways. Tobacco, once dominant crop, has declined in recent years. The Maryland International Raceway (Budd's Creek) attracts many auto racing enthusiasts.

St. Marys County has some of the oldest still-standing buildings in English North America. Many of these of properties are listed on the National Register of Historic Places.[8] These buildings range through many historical periods, starting from the 1600s and running through the 1700s, 1800s and also notable buildings of the early 20th century.[8]

The United States Colored Troops Memorial Statue is a memorial to the more than 700 African-American soldiers and sailors from St. Mary's County who served in the Union forces during the American Civil War. It includes an educational display. Special celebrations are also held there each year. 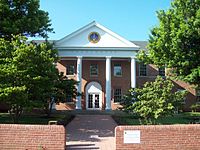 St. Mary's County is governed by county commissioners, the traditional form of county government in Maryland.

The county commissioners exercise such executive powers as exist in the government of the county.

Located on the St. Mary's Peninsula, St. Mary's County is largely bordered by water: the Patuxent River (northeast), the Chesapeake Bay (east), the Potomac River (southwest), and the Wicomico River (west). Its coastline also has many coves, tidal creeks, bays and inlets. Many coastal areas are made up of mixed clay-and-sand cliffs and bluffs, which protect many parts of the county from storm surges, however there are also low-lying coastal areas with coarse sand or gravel beaches or tidal marshlands.

The interior of much of the county is hilly to varying degrees, with forests and agricultural fields. There are also coastal plain areas, much of which are also under agriculture or under new development. Residential development has been steadily increasing for decades.

The county's very extensive waters are mostly brackish, ranging from significant degrees of saltwater in tidal areas that are on or near the Chesapeake Bay, to a greater predominance of freshwater and lower salt concentrations in its interior tidal waterways and also further up its bordering rivers.

St. Mary's County borders Virginia across the Potomac River,[12] St. Mary's County waters are also bordered by Virginia's territorial waters in Potomac tributary mouths on the Virginia side,[12] tidal interface zones[12] and the Chesapeake Bay[13] (water rights in all of these areas are still sometimes disputed).[12][14]

Whereas according to the 2010 United States Census Bureau:

The county has three military bases:

Limited local buses are provided through St. Mary's Transit [1], and commuter bus service to Washington, D.C. is provided by MTA [2].

Grammy Award winning singer and songwriter Mary Chapin Carpenter wrote a song about St. Mary's County, called "Down in Mary's Land", in 1989.[24] She is known for having great affection for St. Mary's County.