From Infogalactic: the planetary knowledge core
Jump to: navigation, search
This article is about the feast day of Saint Stephen the martyr of Jerusalem. For the feast day of the Hungarian saint, see Stephen I of Hungary. For the episode of Doctor Who, see The Feast of Steven.

It is an official public holiday in Alsace, Austria, Balearic Islands, Bosnia and Herzegovina, Catalonia, Croatia, Czech Republic, Denmark, Estonia, Finland, Germany, Ireland, Italy, Luxembourg, Macedonia, Montenegro, Moselle, Norway, Philippines[citation needed], Poland, Romania, Serbia, Slovakia, Slovenia, Sweden, and Switzerland. The date is also a public holiday in those countries that celebrate Boxing Day on the day in addition to or instead of St. Stephen's Day, such as Australia, Canada and the United Kingdom. 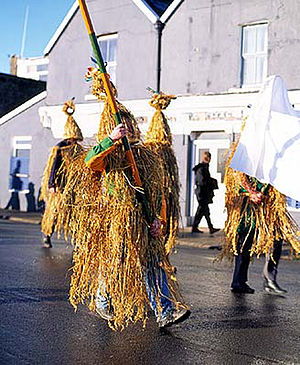 In Ireland, the day is one of nine official public holidays.[3]

In Irish, it is called Lá Fhéile Stiofán or Lá an Dreoilín, meaning the Day of the Wren or Wren's Day. When used in this context, "wren" is often pronounced "ran".[4] This name alludes to several legends, including those found in Ireland, linking episodes in the life of Jesus to the wren. People dress up in old clothes, wear straw hats and travel from door to door with fake wrens (previously real wrens were killed) and they dance, sing and play music. This tradition is less common than it was a couple of generations ago.[5] Depending on which region of the country, they are called wrenboys and mummers. A Mummer's Festival is held at this time every year in the village of New Inn, County Galway and Dingle in County Kerry. St. Stephen's Day is a popular day for visiting family members and going to the theatre to see a pantomime.[6]

St. Stephen's Day in Wales is known as Gŵyl San Steffan, celebrated every year on 26 December. One ancient Welsh custom, discontinued in the 19th century, included bleeding of livestock and "holming" by beating with holly branches of late risers and female servants. The ceremony reputedly brought good luck.[7]

St. Stephen's Day (Sant Esteve) on 26 December is a traditional Catalan holiday. It is celebrated right after Christmas, with a big meal including canelons. These are stuffed with the ground remaining meat from the escudella i carn d'olla, turkey, or capó of the previous day.

St. Stephen's Day (Saint Etienne) is a heritage due to the local German culture even after French annexation in 1918.

Austria, Germany and the Czech Republic

Stephanitag is a public holiday in mainly Catholic Austria. In the Archdiocese of Vienna, the day of patron saint St. Stephen is even celebrated on a Sunday within the Octave of Christmas, the feast of the Holy Family. Similar to the adjacent regions of Bavaria, numerous ancient customs still continued to this day, such as ceremonial horseback rides and blessing of horses, or the "stoning" drinking ritual celebrated by young men after attending church service.

The 26th of December is – as Second Day of Christmas (German: Zweiter Weihnachtsfeiertag, Czech: druhý svátek vánoční) – a public holiday in Germany and the Czech Republic.

St. Stephen is the patron saint of Serbia. St. Stephen's Day falls on 9 January because the Serbian Orthodox Church adheres to the Julian calendar. Serbian medieval rulers' title was Stefan (Stephen). The day is not a public holiday in Serbia.

St. Stephen is also the patron saint of Republika Srpska, one of two entities of Bosnia and Herzegovina. St. Stephen's Day, 9 January, is celebrated as the Day of the Republika Srpska or Dan Republike, though mainly as an anniversary of the 1992 events rather than as a religious feast.

The most well known tradition linked to the day is "the ride of Stephen's Day" which refers to a sleigh ride with horses. These merry rides along village streets were seen in contrast to the silent and pious mood of the preceding Christmas days.

Another old tradition was parades with singers and people dressed in Christmas suits. At some areas these parades were related to checking forthcoming brides. Stephen's Day used to be a popular day for weddings as well. These days a related tradition is dances of Stephen's Day which are held in several restaurants and dance halls.