St Abbs is a small fishing village on the southeastern coast of Scotland, within the Coldingham parish of Berwickshire.

The village was originally known as Coldingham Shore, the name St Abbs being adopted in the 1890s. The new name was derived from St Abb's Head, a rocky promontory located to the north of the village, itself named after the 7th century saint Æbbe of Coldingham.

St Abbs was originally called Coldingham Shore. Prior to any buildings the fishermen who worked their boats from the beach resided at Fisher's Brae in Coldingham. These fishermen had to carry their fishing gear the one and a half miles down a path. The path is now known as the Creel Path; creel is the local name for a lobster pot.

The first building in St Abbs was constructed about the middle of the 18th century followed later by a row of five cottages. This first row of houses were constructed in a traditional Scottish style with a central fire and a wide chimney. The walls were constructed of "clat and clay" a framework of wood interlaced with straw and daubed over with moist clay.

By 1832 it is recorded that the inhabitants of the Shore comprised sixteen families, who with twenty others residing in Coldingham, obtained their livelihood by fishing. In addition to these, thirty people proceeded annually to the north for the herring fishing, which gave employment for fourteen boats from the village.

The village was renamed at the end of the 19th century by the then-laird, Andrew Usher.

In November 1907 the Member of Parliament for Berwickshire, Harold Tennant, announced that the Royal National Lifeboat Society had agreed to supply St Abbs with a lifeboat, and that the Board of Trade had also agreed to place life-saving apparatus at St Abbs as soon as possible.[1] 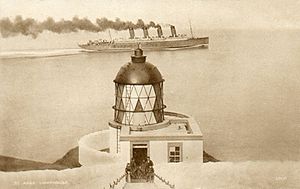 The RMS Mauretania during a speed trial off St Abbs, Scotland 18 September 1907. The lighthouse and its buildings are still there and appear essentially the same.

On 5 September 1914, HMS Pathfinder was sunk off St Abbs Head by the German U-21, the first Royal Navy ship to be sunk by a U-boat.

St Abbs was the main subject of the book, Ebb Tide: Adrift on the Waves of Memory With the Fisher Folk of Berwickshire, by Will Wilson.

St Abbs is a popular site for scuba divers. The sea around the village is unusually clear, in contrast to the more silt-laden coastal waters further to the north or south. These clear waters and the spectacular underwater scenery resulted in Britain's first Voluntary Marine Reserve being established at St Abbs. The Marine Reserve was established on 18 August 1984 by David Bellamy.

Shore diving to a depth of about 15 metres is possible from the rocks on the outside of the harbour wall. It is common for trainees to do initial sea dives here.

The double archway at "Cathedral Rock" is just 50 metres from the shore.[2][3] Several small, nearby rocky islands, such as "Big Green Carr", "Broad Craig" and "Little Carr" are near to the harbour and easily can be circumnavigated underwater.[4] 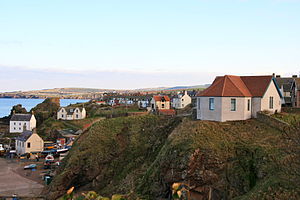 A new visitor centre was opened in St Abbs in March 2011.