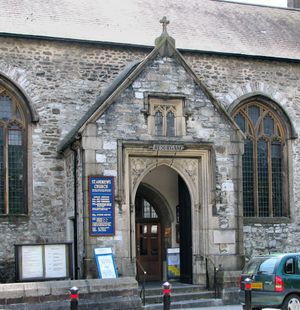 The Minster Church of St Andrew, also known as St Andrew's Church, Plymouth is an Anglican church in Plymouth. It is the original parish church of Sutton, one of the three towns which were later combined to form the city of Plymouth. The church is the largest parish church in the historic county of Devon and was built in the mid to late 15th century. It was designated as a Minster Church in 2009 and it continues to operate as the focus for religious civic events for the city and as a bustling evangelical church.

It is likely to be on the site of the original Saxon church and was once attached to the abbey of Plympton.

The church existed at least as early as the beginning of the 12th century,[1] but by the 15th century it needed to be enlarged because of the growth of the town. The building can be dated approximately as between 1430 and 1490.[2] It has been restored three times, in 1824 by John Foulston, in 1875 by Sir George Gilbert Scott, and by Sir Frederick Etchells after extensive bomb damage in World War II. The Resurgam Door is a commemoration of this. The length is 185 feet (56 m) and the width 96 feet (29 m). There are two aisles on each side of the nave and one each side of the chancel. The arcades are of the type which is standard in Cornwall at the period. The tower is 136 feet (41 m) high and was funded by Thomas Yogge, a prosperous merchant, c. 1460.[2]

The organ, the largest west of Bristol, was built by Rushworth and Dreaper to a design by George Harry Moreton, William Lloyd Webber and O. H. Peasgood. Dr Harry Moreton (1864–1961) was the organist of St Andrew's from 1885 to 1958.[3]

In March 1941, St Andrew's Parish Church was bombed and badly damaged. Amid the smoking ruins a headmistress nailed over the door a wooden sign saying simply Resurgam (Latin for I shall rise again),[1] indicating the wartime spirit, a gesture repeated at other devastated European churches. That entrance to St Andrew's is still referred to as the "Resurgam" door and a carved granite plaque is now permanently fixed there.[4]

The Church was re-roofed and restored by Etchells and re-consecrated on 30 November 1957, St Andrew's Day. The restoration includes a new chancel as the old one had been made into a ruin.

There is a notable collection of 17th century plate and one chalice and cover of 1590.[5]