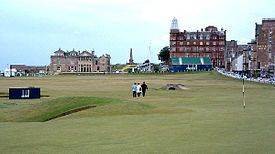 Looking up the 18th fairway on the Old Course towards the clubhouse with the famous bridge over the Swilcan Burn in the middle distance.

St Andrews Links in the town of St Andrews, Fife, Scotland, is regarded as the "home of golf". It has one of the oldest courses in the world, where the game has been played since the 15th century. Today there are seven public golf courses; the Balgove, Eden, Jubilee Course, Strathtyrum, New, the Old Course (which is widely considered one of the finest, and certainly the most famous and traditional, courses in the world), and the new Castle Course, sited on the cliffs a mile to the east of St Andrews and designed by the architect David McLay Kidd, which opened in June 2008.[1] The courses of St Andrews Links are owned by the local authorities and operated by St Andrews Links Trust, a charitable organization. St Andrews is also home to the Royal and Ancient Golf Club of St Andrews, one of the most prestigious golf clubs and until 2004 one of the two rule making authorities of golf (in that year, the Royal and Ancient Club passed on its rulemaking authority to an offshoot organisation, The R&A).

In general, St Andrews is a popular hub for golf tourism, as there is a high density of links and heathland courses in the area. In addition to the public courses there are two courses at the privately owned Fairmont Hotel (Torrance and Kittocks) to the south of the town; the Dukes and Drumoig, both inland parkland courses to the west. A few miles further South are the modern links of Kingsbarns and the traditional Balcomie links at Crail. Also nearby are the courses at Elie, Lundin, Leven, Scotscraig and Anstruther. Within 45 minutes drive are Monifieth, Downfield, Carnoustie and Panmure.

Castle Course opened in June 2008, becoming the seventh public course at St Andrews.[8] The course is a par 71 and measures 6,759 yards from the back tees.[9]

The Eden Course opened in 1914 after demand on the existing courses grew. It was designed by Harry Colt, and alterations in 1989 by Donald Steel maintain Colt's standards.[10] It was named after the Eden estuary by which it resides, as the profits from mussels collected there once made up an important part of the St Andrews economy.[6]

The Jubilee Course is the longest of the seven golf courses. It was named after Queen Victoria's Diamond Jubilee celebration in 1897.[11]

Originally intended for Victorian dressed ladies, and other golf beginners, it has evolved into one of the hardest courses at St Andrews Links. The course is commonly used to test junior and amateur golfers for the British Mid-Amateur Golf Championship, as well as the St Andrews Link Trophy.[12]

Initially a 12 hole course,[13] it was expanded to 18 holes in 1905. The course has seen considerable developments under the management of Willie Auchterlonie, Donald Steel, David Wilson and Graeme Taylor. It now plays at around 6,745 yards, and is host to the St Andrews Links Trophy. Jubilee is one of several courses in Scotland that are under threat from erosion.[14]

The Strathtyrum Course, opened in July 1993, became the first new 18 hole layout at St Andrews in nearly 80 years.[15] It was built on land that was previously part of the Strathtyrum estate and sold to the St Andrews Links Trust by Mrs Gladys Cheape in 1986.[2][16]

The Old Course, believed to be the oldest golf course in the world, dates back more than 600 years.[17]

The New Course, located adjacent to the Old Course, was paid for and commissioned by The R&A who asked Old Tom Morris to be designer. The New Course opened for play in 1895.[18]