From Infogalactic: the planetary knowledge core
Jump to: navigation, search
For other places with the same name, see St Augustine's Abbey (disambiguation).

St Augustine's Abbey was a Benedictine monastery in Canterbury, Kent, England.[2] The abbey was founded in 598 and functioned as a monastery until its dissolution in 1538 during the English Reformation. After the abbey's dissolution, it underwent dismantlement until 1848. Since 1848, part of the site has been used for educational purposes and the abbey ruins have been preserved for their historical value.[3]

From founding until dissolution

In 597, Augustine arrived in Anglo-Saxon England, having been sent by the missionary-minded Pope Gregory I to convert the Anglo-Saxons.[4] The King of Kent at this time was Æthelberht or Ethelbert. Although he worshipped in a pagan temple just outside the walls of Canterbury to the east of the city, Ethelbert was married to a Christian, Bertha. According to tradition, the king not only gave his temple and its precincts to St Augustine for a church and monastery,[4] he also ordered that the church to be erected be of "becoming splendour, dedicated to the blessed apostles Peter and Paul, and endowed it with a variety of gifts." One purpose of the foundation was to provide a residence for Augustine and his brother monks. As another, both King Ethelbert and Augustine foresaw the abbey as a burial place for abbots, archbishops, and kings of Kent.[5]

William Thorne, the 14th century chronicler of the abbey, records 598 as the year of the foundation.[5] The monastic buildings were most likely wooden in the manner of Saxon construction, so they could be quickly built. However, building a church of solid masonry, like the churches Augustine had known in Rome, took longer.[6] The church was completed and consecrated in 613. Ca. 624 a short distance to the east, Eadbald, son and successor of Ethelbert, founded a second church, dedicated to Saint Mary which also buried Kentish royalty.[7] The abbey became known as St Augustine's after the founder's death.[8]

For two centuries after its founding, St Augustine's was the only important religious house in the kingdom of Kent.[9] The historian G. F. Maclear characterized St Augustine's as being a "missionary school" where "classical knowledge and English learning flourished."[10] Over time, St Augustine's Abbey acquired an extensive library that included both religious and secular holdings. In addition, it had a scriptorium for producing manuscripts.[11]

Dunstan, Archbishop of Canterbury from 959 to 988, influenced a reorganisation of the abbey to conform to Benedictine rule. Buildings were enlarged and the church rebuilt. Dunstan also revised the dedication of the abbey, from the original Saints Peter and Paul, by adding Saint Augustine in 978.[12] Since then, the abbey has been known as St Augustine's.[13]

Following the Norman Conquest of England in 1066, William the Conqueror confiscated landed estates, but he respected Church property.[15] At St Augustine's Abbey, the Anglo-Saxon buildings were completely reconstructed in the form of a typical Norman Benedictine monastery.[8] By 1100, all the original buildings had disappeared under a Romanesque edifice. There was further rebuilding as a result of the great fire in 1168.[16] The fire's destruction accounts for the paucity of historical records for the preceding period.[17]

From about 1250 onwards was a period of wealth in which "building succeeded building."[18] Boggis' history calls this period a time of "worldly magnificence," marked by "lavish expenditures" on new buildings, royal visits, and banquets with thousands of guests. In addition, the papacy imposed many levies on the abbey. The large debt that was incurred by these expenditures might have swamped the abbey had it not been for generous benefactors who came to the rescue.[19]

The cloister, frater (refectory) and kitchen were totally rebuilt. A new abbot's lodging and a great hall were added. In the early 14th century, land was acquired for a cellarer's range (living and working quarters for the cellarer who was responsible for provisioning the abbey's cellarium), a brewhouse, a bakehouse, and a new walled vineyard. A Lady chapel was built to the east of the church.[8]

The abbey gatehouse was rebuilt from 1301 to 1309 by Abbot Fyndon. It has since been known as the Fyndon Gate or the Great Gate. The chamber above the entrance was the state bed-chamber of the Monastery. In 1625, Charles I of England and Queen Henrietta Maria slept in this chamber, following their marriage in Canterbury Cathedral.[20] In 1660, after the Restoration, Charles II and his brothers, the Dukes of York and Gloucester, stayed in the gatehouse on their way to London.[21]

Fyndon's gate suffered such damage by German bombs during the Second World War that it had to be rebuilt.[20] The gate faces a small square known since the reign of Charles I as Lady Wootton's Green."[21] Statues of Æthelberht of Kent and Queen Bertha stand on the green.[20]

Boggis describes the early 16th century leading up to the Dissolution of the Monasteries as "days of decadence". Although the abbey owned estates throughout Kent amounting to 19,862 acres, Boggis holds that "historical evidence proves conclusively that even if Henry VIII. had never dissolved them, the English monasteries were already doomed." The "extortionate exactions" of the Papacy would lead to bankruptcy.[22]

However, the English Reformation accompanied by the Dissolution of the Monasteries happened before bankruptcy. The Reformation replaced the Pope (a cleric) with a Monarch (a layman). Actions by the Parliament's House of Commons strengthened the power of the laity versus the power of the clergy. These actions were part of the English Reformation’s "great transfer" of power, both economic and religious, from Ecclesiastical to Secular authorities.[23]

As part of the "great transfer," Parliament gave King Henry VIII authority to dissolve the monasteries and confiscate the property for the Crown. The rationale given was "that the religious houses had ceased to apply their property to the specific religious uses for which it was originally given."[15]

On 30 July 1538, the King's Commissioners arrived to take the surrender of St Augustine's Abbey. The last abbot and monks complied and left the abbey. The abbey, with its site, its goods, buildings, lands and all other possessions, became the property of the Crown. This dissolution ended over 940 years of monastic presence.[24] 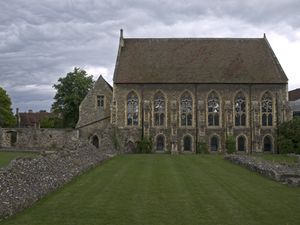 During the rest of Henry's reign, St Augustine's Abbey was held by the Crown with some of its buildings converted into a royal residence. However, in other parts of the abbey dismantling and sale of material began in 1541.[25] Some of the stone was used in the fortifications of the Pale of Calais, but more of it was sold locally. The library, containing two thousand manuscripts, was destroyed and the treasure plundered.[26]

The royal residence was used occasionally by the royal family as late as the reign of Queen Elizabeth I, during which the buildings were leased to a succession of noblemen.[25][26] In 1558, Elizabeth leased the palace to Henry Lord Cobham. During Lord Cobham’s possession, the Queen kept her court here while on one of her royal progresses.[27] Lord Cobham was a resident of Kent who had served her faithfully as a diplomat and parliamentarian.[28] On the attainder of Lord Cobham for treason in 1603 under the reign of James I, the residence was granted to Robert Cecil, Lord Essenden.[27]

After Cecil died in 1612, the residence passed to Edward, Lord Wootton of Marley (sometimes spelled "Wotton").[29] Lord Wootton employed John Tradescant the elder to lay out formal gardens. Wootton died in 1626, but Lady Wootton lived on in her palace until her death in 1658. The open space before the gateway is still known as Lady Wootton's Green.[30]

From then on until 1844, the desolation continued until it had engulfed the church, cloister, kitchen and refectory.[31] Other parts of the site suffered degradation. From 1770 to 1844, the Alfred Beer & Company brewery operated within the abbey precincts.[32] In 1804, a portion of the site was divided into lots and sold. The Great Court was used as a bowling green and skittle ground. Ethelbert's Tower, the remaining tower of the Norman abbey, was taken down in 1822.[26] Robert Ewell, in his Guide to St. Augustine’s Monastery and Missionary College wrote that in the first half of the 19th century, the abbey "reached its lowest point of degradation".[29]

The condition of the abbey did not go unnoticed. In 1844 a rich young landowner, member of parliament, and generous churchman, Alexander James Beresford Hope, visited the ruins, found them deplorable, and bought them. Inspired by the missionary zeal of the Reverend Edward Coleridge, Hope and other donors gave additional money to restore and construct buildings for the establishment of a college to train young men as missionaries in the British colonies.[26] They envisioned a dual purpose for the college: (a) to educate missionaries and (b) to excavate and preserve the abbey remains.[33] St Augustine's Missionary College remained in existence until 1947.[34] However, on the night of 31 May 1942, its buildings were so badly damaged by a German blitz that the College ceased operations.[35] 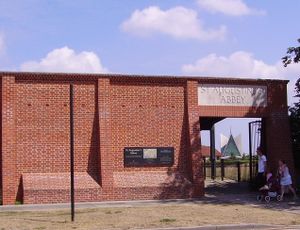 From 1952 to 1967, the Missionary College buildings were used as The Central College of the Anglican Communion.[36]

Since 1976, the college buildings (plus some new ones) have been used by the King's School, Canterbury, for boarding houses and the School Library. This part of the St Augustine's Abbey site was purchased by the School in 1994.[37]

The ruins of the abbey are now a UNESCO World Heritage Site[38] in the care of English Heritage.[39]

Notable burials at the abbey