From Infogalactic: the planetary knowledge core
Jump to: navigation, search
Not to be confused with St Botolph's Aldgate.

St Botolph without Aldersgate (also known as St Botolph's, Aldersgate) is a Church of England church in London dedicated to St Botolph. It is located on Aldersgate Street in the City of London.

Of medieval origin, the church survived the Great Fire of London with only minor damage but subsequently fell into disrepair and was rebuilt in 1788–91. The church is renowned for its beautiful interior and historic organ.

The church was one of four in medieval London dedicated to Saint Botolph or Botwulf, a 7th-century East Anglian saint, each of which stood by one of the gates to the City. The other three churches dedicated to St Botolph were St Botolph's, Billingsgate (destroyed by the Great Fire and not rebuilt), St Botolph's, Aldgate, and St Botolph-without-Bishopsgate.[1] Before the legend of Saint Christopher became popular, Botolph was venerated as the patron saint of travellers, which is thought to be why churches at the City gates have this dedication.[2]

The church was founded before 1291. The earliest recorded rector is John de Steventon in 1333. The living was originally in the possession of St Martin's-le-Grand, but on the dissolution of the priory King Henry VIII granted it to the bishop of the newly founded Diocese of Westminster.[3] The patronage eventually passed to the dean and chapter of Westminster Abbey.[4]

During the Middle Ages there was a hospital for the poor outside Aldersgate. A Cluniac foundation, it was suppressed by King Henry V as an alien house, and its lands and goods were granted to the parish of St Botolph. [5]

The medieval church was a Gothic building, divided by arcades into nave and aisles. There were three gables at the east end.[6] In 1627, the steeple was rebuilt in Portland stone, with battlements and a turret, and the rest of the church repaired. Many of the pews were replaced, and a new clock and dial were installed. The improvements cost, in total, £415. The medieval church was 78 feet (24 m) long and 51 feet (16 m) wide. The 17th-century steeple was about 65 feet (20 m) high, and contained six bells.[7] In an account published in 1773 the church is described as having galleries on the north and west sides, oak pews, and a carved oak pulpit.[7] 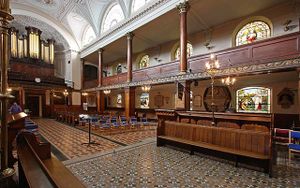 Interior of the church

The church escaped the Great Fire of London with only minor damage,[7] but, having become unsafe, was demolished[6] and rebuilt in its present form in 1788-91[8] under the supervision of Nathaniel Wright, surveyor to the north district of the City of London.[9] The new church was built of brick, with a low square bell tower at the west end constructed on the remains of its stone predecessor.[9]

The plain exterior is in contrast to what John Betjeman called an "exalting" succession of features inside.[10] The interior has wooden galleries supported on square panelled columns, a semi-circular apse with a half dome, a highly decorated plasterwork ceiling, and, at the east end the only 18th century stained glass window in the City of London, a depiction of The Agony in the Garden[11] painted by James Pearson.[12] The stained glass in the aisles is partly Victorian, and partly from the 1940s.[12] Some monuments were preserved from the old church, including the tomb of Anne Packington, who died in 1563.[6] The organ, in a gallery at the west end,[9] is by Samuel Green and dates from 1788.[12]

The east façade, towards Aldersgate Street, is a screen wall, erected in 1831 and executed in Roman cement, with a pediment and four attached Ionic columns standing on a high plinth, with a Venetian window between them.[6][9]

The church underwent several restorations during the 19th and 20th centuries, and many of the furnishings are from the late 19th century.[9] From the mid-1980s the church was restored by Caroe & Partners. Work on the east front was completed in 2008.[12] 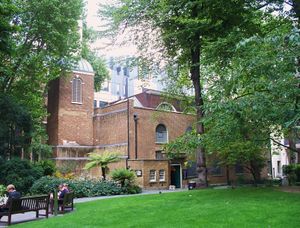 St Botolph's viewed from Postman's Park, part of which was the formerly the parish churchyard.

St Botolph's churchyard[13] was combined with those of St Leonard, Foster Lane, and Christchurch, Newgate Street, into Postman's Park in 1880,[14] and this now contains the Watts Memorial to Historic Self-Sacrifice, commemorating civilian Londoners who died heroic deaths.

The church was designated a Grade I listed building on 4 January 1950.[9]

Currently, St Botolph's, Aldersgate is used by the London City Presbyterian Church, a congregation of the Free Church of Scotland, that meets there every Sunday. During the week, the building is used for lunchtime services, under the auspices of St Helen's Bishopsgate, Church of England. It is also the rehearsal venue of the Amati Orchestra.