St Botolph-without-Bishopsgate is a Church of England church on the west side of Bishopsgate in the City of London, first mentioned in 1212.[1] It survived the Great Fire of London in 1666, and was rebuilt in 1724–29.

The church is on the west side of Bishopsgate near Liverpool Street station. In the Middle Ages the site was just outside the city walls near the "Bishop's Gate" after which the street is named.[2] St Botolph was a patron saint of travellers, so it was an appropriate dedication for a church near a city gate. There were three other churches of St Botolph in medieval London, at Billingsgate, Aldgate and Aldersgate.[3]

Adjoining the buildings is a substantial churchyard – running along the back of Wormwood Street, the former course of London Wall – and a former school.[4] The church is linked with the Worshipful Company of Bowyers.

Christian worship on this site may have Roman origins, though this is not fully proven.[citation needed]Stow, writing in 1598 only describes the church of his time as standing "in a fair churchyard, adjoining to the town ditch, upon the very bank thereof".[3] It narrowly escaped the Great Fire, the sexton's house having been partly demolished to stop the spread of the flames.[5] Writing in 1708, Hatton described it as "an old church built of brick and stone, and rendered over". By this time the Gothic church had been altered with the addition of Tuscan columns supporting the roof, and Ionic ones the galleries.[3] 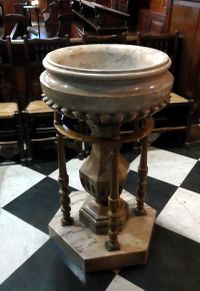 The font, in which John Keats was baptised

In 1710, the parishioners petitioned parliament for permission to rebuild the church on another site, but nothing was done. In 1723 the church was found to be irreparable [5] and the parishioners petitioned again.Having obtained an act of Parliament, they set up a temporary building in the churchyard, and began to rebuild the church. The first stone was laid in 1725, and the new building was consecrated in 1728, though not completed until the next year. The designer was James Gold.[2] or Gould.[6] During construction, the foundations of the original Anglo-Saxon church were discovered.

To provide a striking frontage towards Bishopsgate, the architect placed the tower at the east end, its ground floor, with a pediment on the exterior, forming the chancel. The east end and tower are faced with stone, while the rest of the church is brick, with stone dressings.[2]

The interior is divided into nave and aisles by Composite columns, the nave being barrel vaulted. The church was soon found to be too dark, so a large west window was created, but this was largely obscured by the organ[2] installed in front of it in 1764.[5] In 1820 a lantern was added to the centre of the roof.[2]

The church was designated a Grade II* listed building on 4 January 1950.[7]

By permission of the Rector, The Orthodox Parish of Saint Botolph in London[8] worships there, part of the Antiochian Orthodox Archdiocese of the British Isles and Ireland.[9]

The infant son of the playwright Ben Jonson is buried in the churchyard, and baptisms in this church include Edward Alleyn in 1566 and John Keats (in the present font) in 1795.[10] At one point the satirist and essayist Stephen Gosson was rector.

The woman claimed by A L Rowse to be Shakespeare's "Dark Lady", Emilia Lanier, was baptised Emilia Bassano at the church on 27 January 1569. She married Alfonso Lanier there on 18 October 1592.[11]

Within the churchyard, the church hall is the Grade II, former Hall of the Worshipful Company of Fan Makers. It is a single storied classical red brick and Portland stone building, with niches containing painted figures of charity children.[12]

Also within the area of the church is a Turkish bath designed by the architect, Harold Elphick, and opened by City of London Alderman Treloar on 5 February 1895 for Henry and James Forder Nevill who owned other Turkish baths [13] in Victorian London.