St Catharine’s College is a constituent college of the University of Cambridge. Founded in 1473, the college is nicknamed "Catz". The college is located in the historic city-centre of Cambridge, and lies just south of King's College and across the street from Corpus Christi College. The college is notable for its open court (rather than closed quadrangle) that faces towards Trumpington Street.

St Catharine’s is unique in being the only Oxbridge College founded by the serving head of another College.[1] The college community is moderately sized, consisting of approximately 70 fellows, 150 graduate students, and 410 undergraduates.[2] As of 2013, the college's endowment stood at £48.3 million, placing the college 18th richest of the University's colleges.[3] 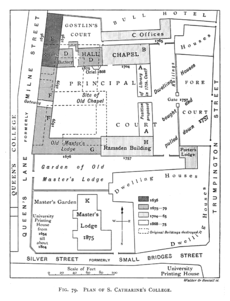 Robert Woodlark, Provost of King’s College, had begun preparations for the founding of a new college as early as 1459 when he bought tenements on which the new college could be built. The preparation cost him a great deal of his private fortune (he was suspected of diverting King’s College funds), and he was forced to scale down the foundation to only three Fellows. He stipulated that they must study theology and philosophy only. The college was established as "Katharine Hall" in 1473. The college received its Royal Charter of Incorporation in 1475 from King Edward IV. Wodelarke may have chosen the name in homage to the mother of King Henry VI who was called Catharine, although it is more likely that it was named as part of the Renaissance cult of St Catharine, who was a patron saint of learning. At any rate, the college was ready for habitation and formally founded on St Catharine’s day (November 25) 1473. There are six Saints Catharine, but the college was named for Saint Catharine of Alexandria.[4] 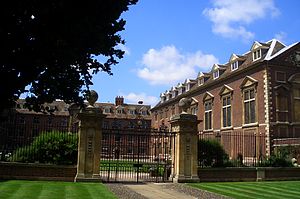 The initial foundation was not well-provided for. Wodelarke was principally interested in the welfare of Fellows and the College had no undergraduates at all for many years. By 1550, however, there was an increasing number of junior students and the focus of the College changed to that of teaching undergraduates.

As the College entered the 17th century, it was still one of the smallest Colleges in Cambridge. However, a series of prudent Masters and generous benefactors were to change the fortunes of the College and expand its size. Rapid growth in the fellowship and undergraduate population made it necessary to expand the college, and short-lived additions were made in 1622. By 1630 the College began to demolish its existing buildings which were decaying, and started work a new court. In 1637 the College came into possession of the George Inn (later the Bull Inn) on Trumpington Street. Behind this Inn was a stables which was already famous for the practice of its manager, Thomas Hobson, not to allow a hirer to take any horse other than the one longest in the stable, leading to the expression “Hobson's choice”, meaning no choice at all. 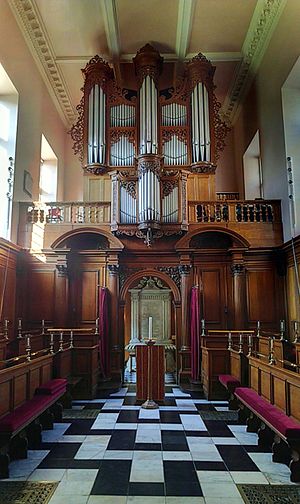 Chapel at the college

The period of 1675 to 1757 saw the redevelopment of the college's site into a large three-sided court, one of only four at Oxbridge colleges; the others are at Jesus and Downing at Cambridge and Worcester, St Catharine’s sister college, at Oxford. Proposals for a range of buildings to complete the fourth side of the court have been made on many occasions.[5]

The college was granted new statutes in 1860 and adopted its current name. In 1880, a movement to merge the college with King’s College began. The two colleges were adjacent and it seemed a solution to King’s need for more rooms and St Catharine’s need for a more substantial financial basis. However, the Master (Charles Kirkby Robinson) was opposed and St Catharine’s eventually refused.

In 1966 a major rebuilding project took place under the Mastership of Professor E. E. Rich. This saw the creation of a new larger hall, new kitchens and an accommodation block shared between St Catharine's and King's College. Pressure on accommodation continued to grow, and in 1981 further accommodation was built at St. Chad's on Grange Road, with further rooms added there in 1998. In 2013 the College completed the building of a new lecture theatre, College bar and JCR.[4]

In 1979, the membership of the college was broadened to welcome female students, and in 2006 the first woman was appointed as Master of the college, Dame Jean Thomas.

In 2015, St Catharine's became the first College in Cambridge to implement a gender-neutral dress code for formal hall[7] 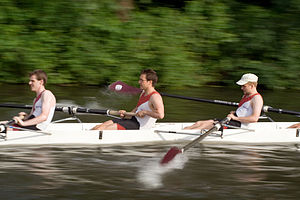 St Catharine's College Boat Club in the May Bumps 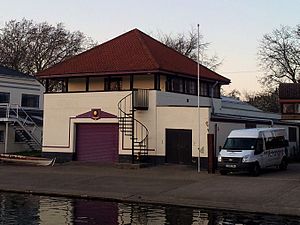 The academic reputations of colleges within Cambridge are hotly disputed and often difficult to determine. Historically, St Catharine's position has been unexceptional and in the controversial annual league table of colleges placed towards the middle. In 2014 its position slipped to 21st,[8] but rose to 13th in 2015 with over 25% of students gaining a First. The college had been placed at the top of the Tompkins Table, which ranks the colleges by the class of degrees obtained by their undergraduates, for the first time in 2005. Between 1997 and 2010, the college averaged 9th of the 29 colleges.

The College maintains a friendly rivalry with Queens’ College after the construction of the main court of St Catharine's College on Cambridge’s former High Street relegated one side of Queens' College into a back alley. A more modern rivalry with Robinson College resulted from the construction in the 1970s of a modern block of flats named St Chad’s (in which the rooms are octagonal to resemble the wheel on the college crest) by the University Library.

The College is known for its reputation in hockey and racquet sports, in part due to its facilities for these sports including grass tennis courts and an astroturf hockey pitch. St Catharine's College Boat Club, the college boat club, hosts the Cardinals Regatta each year, in which teams compete along a short course in fancy dress with an emphasis on bribery to secure victory. The college's Boat Club is moderately strong, with both Men's and Women's 1st boats generally residing in the middle of the 1st division of the May Bumps races.

The College hosts several other notable societies. The Shirley Society is the College literary society, the oldest in Cambridge, it regularly hosts significant figures from the arts world throughout the academic year. The College-based girls' choir is the first of its kind in a UK university and is composed of girls aged 8–14 from local schools.