From Infogalactic: the planetary knowledge core
Jump to: navigation, search
For other educational institutions of the same name, see St Catherine's College (disambiguation).

St Catherine's College (often called Catz) is one of the constituent colleges of the University of Oxford in England. Its motto is Nova et Vetera, which translates as: "the new and the old".

The college was founded by the distinguished historian Alan Bullock, who went on to become the first Master of the College, and later Vice-Chancellor of Oxford University. As of 2006, the college had an estimated financial endowment of £53m.[2]

The College traces its descent from the Delegacy of Non-Collegiate Students, founded in 1868 to offer university education at Oxford without the costs of college membership. Nonetheless, the social role of a college was re-established by the Delegacy's students, meeting as St Catherine's Club (originally St Catharine's Club), which was named after its meeting place in a hall on Catte Street.[3] The Club was officially recognised by the University in 1931 as St Catherine's Society. It was thus developing the characteristics of a college, and in 1956 the Delegates decided to formalise this change in status.[4]

After acquiring 8 acres (32,000 m2) from Merton College, Oxford on part of Holywell Great Meadow for £57,690, monies were sought from the University Grants Committee who also agreed to supply £250,000 towards the building, and additional funds up to £400,000 for all facilities. By 1960 Sir Alan Bullock raised a further £1,000,000 with invaluable assistance from two industrial notables, Sir Alan Wilson (whom he met by chance on the RMS Queen Mary) and Sir Hugh Beaver. After a total cost of £2.5 million, the college opened in 1962 to male students. In 1974 St Catz was one of the first men's colleges to admit women as full members, the others being Brasenose, Jesus, Hertford, and Wadham.[5] 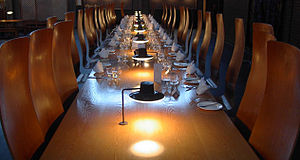 The College is situated towards the east of Oxford, on the bank of the Cherwell river. Its striking buildings in glass and concrete by the Danish architect Arne Jacobsen marry modern materials with a traditional layout around a quadrangle. Jacobsen's designs went further than just the fabric of the buildings, with cutlery, furniture, and lampshades being of his own idiosyncratic design. The dining hall is notable for its Cumberland slate floor.

The original college buildings received a Grade I listing on 30 March 1993.[6] Jacobsen's plans for the college did not include a chapel: St Cross Church on the corner of Manor Road and Longwall Street used to serve this purpose when required before its decommission in the Autumn of 2008. The St Catherine's Christmas carol concert has since been held in Harris Manchester College's chapel. The college has a bell tower however; it is particularly visible since no college building is more than three storeys high. An extra floor was reputedly planned for most accommodation blocks, but due to regulations concerning safe building on marshland, this was removed from the final design.[citation needed]

St Catherine's has a number of lecture theatres and seminar rooms, a music house, two student computer rooms, a small gym, squash courts, a punt house, and among the most spacious common rooms in Oxford. There are also additional purpose-built conference facilities with lecture theatres, meeting rooms and bar, and car parking available for non-students. The dining hall, which seats 350 diners, has the largest capacity of any Oxford college.[citation needed]

The majority of St Catherines' buildings are in the form of 'staircases' that open directly onto the quad(s) outside; these are filled with student rooms and office space. There is little indoor space in the college and St Catherines favours a minimalist, rather austere environment, though still comfortable. Student rooms are light and spacious, notable for their 'curtain wall' glazing.

In 1994 and 2004, the college completed construction of three and seven new accommodation staircases designed by Hodder and Partners with en-suite rooms, which means that most undergraduates can live on the main college site for the duration of their course. Prior to this, all undergraduates had the experience of living off-campus for their second year. These new staircases effectively form a second quad, which is largely used to provide accommodation for conferences during the breaks between academic terms.

The College celebrates its patron saint each year with a special Catz Night dinner, attended by junior and senior members of the College. Every three years the College also holds a ball, usually off site due to the problem of securing the college's perimeter sufficiently for insurance purposes. The most recent off-site ball was held was 9 February 2008 at Heythrop Park.[7] On 12 February 2011, the latest incarnation of the Catz Ball was held on-site. The theme was surrealism, and the quad was decorated with dozens of marquees – including a large circus tent – with entertainment including Gentleman's Dub Club, MC Xander, masseurs and blow-up Laser Quest.[8]

St Catherine's College Boat Club is the rowing club of the college. In Torpids 2012, the men's first boat was fourth on the river and then were bumped three times, ending seventh. The first boat was then ninth on the river after being bumped in the Summer Eights.[9] The women's first boat held headship in Torpids a few years ago. British Olympic gold medallists Sir Matthew Pinsent and Andrew Triggs-Hodge, and silver medallist Colin Smith all rowed for the college.