The parish takes its name from Saint Endelienta, who is said to have evangelized the district in the fifth century and to have been one of the children of King Brychan. Two wells near the village are named after her.

An electoral ward exists, which includes Portreath and Rock, with a population at the 2011 census of 3268.[2] 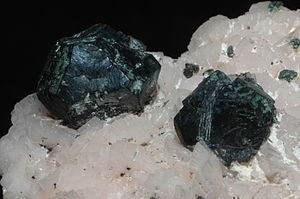 St Endellion lies within the Cornwall Area of Outstanding Natural Beauty (AONB). Almost a third of Cornwall has AONB designation, with the same status and protection as a National Park.

The houses at Roscarrock and Tresungers are listed buildings: at Roscarrock part of the medieval house remains (it is Listed Grade I); Tresungers farmhouse was built in the late 16th century.[3] The Roscarrock family included Nicholas Roscarrock.

The parish church of St Endelienta stands beside the road to Wadebridge and is a large building of the 15th century in Perpendicular style. It contains some fine examples of carving in stone and wood. From an unknown date in the 13th century, it has been a collegiate church with four prebends. It somehow escaped abolition in 1545 and continues to the present day: one of the prebendaries is the Rector, and the others usually incumbents of nearby parishes. A new ecclesiastical parish at Port Isaac was created out of the parish in 1913.[4]

Music festivals are held at Easter and at the end of July: they have been held in the summer since 1959 and at Easter since 1974.[5][6] Some of the musicians involved formed the Endellion Quartet.

St. Endellion is also a brie style cheese, made at the village of Trevarrian near Newquay, cream enriched and hand-made using only Cornish milk and cream. The cheese is made by Cornish Country Larder, a firm founded by John Gaylard in the mid-1990s and still a family run concern. The cheese has won many notable awards.[12]