From Infogalactic: the planetary knowledge core
(Redirected from St George's cross)
Jump to: navigation, search
For the English national flag, see Flag of England. For the Glasgow subway station, see St George's Cross subway station.
Not to be confused with the Cross of St. George, a military distinction in Russia, or the George Cross, a UK and Commonwealth medal. 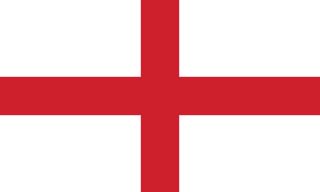 The St. George's cross, seen here on the flag of England.

Saint George's Cross (or the Cross of Saint George) is a red cross on a white background. It was originally the ensign of the Republic of Genoa and was used successively by crusaders and then adopted by England. It became associated with Saint George, the "warrior saint" often depicted as a crusader from the late Middle Ages.

The cross has appeared on many flags, emblems, standards, and coats of arms, such as that of the Swabian League in the pre-Reformation Holy Roman Empire, and it was introduced as the emblem of several countries and cities which have or had St George as a patron saint, notably the Republic of Genoa, the Duchy of Milan, the Kingdom of England, and Georgia in the Caucasus.

The cross is also found, for various reasons, on the provincial flags of Huesca, Zaragoza, and Teruel (the three provinces of Aragón in Spain) and Barcelona. It is used extensively across Northern Italy and is the symbol of Bologna, Padua, Genoa, Reggio Emilia, Mantua, Vercelli, Alessandria, and most notably of Milan, where it is often called the "Cross of St Ambrose".

Origins and medieval use Depiction of a Saint wearing a red cross on a white surcoat, by Bernat Martorell, dating from the 1430s 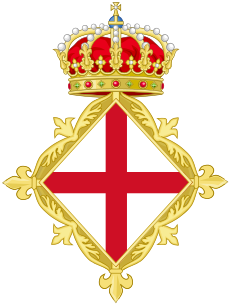 Saint George became widely venerated as a "warrior saint" during the Third Crusade. There was a legend that he had miraculously assisted Godfrey of Bouillon; also that Richard the Lionheart had placed himself under his protection.[1]

According to legend, the crusaders received miraculous help at the siege of Antioch on 28 June 1098 from a great army on white horses, clothed in white and bearing white banners, led by St George, St Demetrius, and St Mercurius. However, there was no association of the red cross with St George before the end of the crusades.[2]

The red cross in particular was associated with the Knights Templar, from the time of the Second Crusade (1145),[3] but in 1188 red and white crosses were chosen to identify the French and English troops in the "Kings' Crusade" of Philip II of France and Henry II of England, respectively. Together with the Jerusalem Cross, the plain "George's Cross" became a recognizable symbol of the crusader from about 1190, and in the 13th century it came to be used as a standard or emblem by numerous leaders or polities who wanted to associate themselves with the crusades.[clarification needed] The red-on-white combination was chosen by Genoa and Aragon, among others. Saint George was depicted as a crusader knight during this time, but the red cross had no particular association with him. A crusader-era fresco in the crypt of Trani cathedral shows Saint George wearing a white cross on a red surcoat. The white-on-red version was chosen as the Reichsbanner ("imperial banner") by the German crusaders in the 12th century, and Emperor Frederick II used it in his European campaigns of the 1250s after he had returned from the crusades. It continued to be used as the Reichssturmfahne ("imperial war flag") of the Holy Roman Empire, eventually giving rise to the flag of Savoy and the present-day flags of Switzerland and Denmark).

The association with the Saint of the red-on-white cross probably arises in Genoa, which had adopted these tinctures for their flag and George as their patron saint in the 12th century. A vexillum beati Georgii is mentioned in the Genovese annals for the year 1198, referring to a red flag with a depiction of St George and the dragon. An illumination of this flag is shown in the annals for the year 1227. The Genoese flag with the red cross was used alongside this "George's flag", from at least 1218, and was known as the insignia cruxata comunis Janue ("cross ensign of the commune of Janua"). The flag showing the saint himself was the city's principal war flag, but the flag showing the plain cross was used alongside it in the 1240s.[4]

The cross ceased to be a symbol directly associated with the "taking of the cross", the resolve to fight in a crusade, after the failure of the crusades in the 14th century. With the development of systematic heraldry, there was great demand for variations of the cross symbol and associated terminology. Juliana Berners reports that there were Crossis innumerabull born dayli. The term "St. George's cross" was at first associated with any plain Greek cross touching the edges of the field (not necessarily red on white).[5] Thomas Fuller in 1647 spoke of "the plain or S. George's cross" as "the mother of all the others" (that is, the other heraldic crosses).[6] It became fashionable in the 15th century, with the full development of classical heraldry, to attribute fictional coats of arms to saints and other historical characters from the pre-heraldic ages. The widespread attribution to Saint George of the red cross on a white field in western art dates to the early 15th century, but the association may have been established by the early 14th century of the red cross used as insignia cruxata comunis by the city of Genoa and its patron saint George. In any case, Edward III of England chose Saint George as the patron saint of his Order of the Garter in 1348, and also took to using a red-on-white cross in the hoist of his Royal Standard. 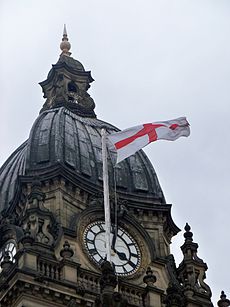 There used to be a claim that the red cross worn as an emblem was brought to England as early as the 1190s by Richard the Lionheart, but this cannot be substantiated.[7] The red cross was introduced to England by the late 13th century, but not as a flag, and not at the time associated with Saint George. It was worn by English soldiers as an identification from the early years of the reign of Edward I (1270s),[8] and perhaps originated a few years earlier, in the Second Barons' War (specifically in the Battle of Evesham of 1265, during which, according to chronicler William Rishanger, Simon de Montford observed that the king had taken from him the idea of having his soldiers marked with a cross).[9]

Saint George rose to the position of "patron saint of England" in a process beginning in 1348 with the foundation of the Order of the Garter and culminating with the abolition of all saint's banners except for the St. George's banner in 1552. From 1348 and throughout the 15th century, the St. George's Cross was shown in the hoist of the Royal Standards of the Plantagenet kings of England.

A combined British flag was created in 1606 (after the dynastic union of England and Scotland in 1603, the so-called "Union of the Crowns") by combining St George's Cross with the St Andrew's Cross (the flag of Scotland). The flag was initially for maritime display, later restricted to the King's ships. Afterwards, the St George flag remained the flag of England for other purposes until the Acts of Union 1707. At the union, the first Union Flag became official for all purposes in the new Kingdom of Great Britain. From this time, the St. Georges Cross came to be seen as a symbol of England and Wales when used alongside symbols for Scotland or Ireland; so in the flags of the Commonwealth of England during 1649 to 1660.

The flag of St George is also the rank flag of an Admiral in the Royal Navy, and civilian craft are forbidden to fly it. However, ships which took part in the rescue operation at Dunkirk during World War II are allowed to fly it as a jack.

Churches belonging to the Church of England may fly the St George's Cross (unless another flag is flown by custom for special reasons). The correct way for the church to fly the St George's cross (since an order from the Earl Marshal in 1938) is with the arms of the diocese in the upper left-hand corner of the flag.[10]

The flag of St George has enjoyed a resurgence in popularity since the late 20th century, partly due to football-inspired nationalism, and also in response to the devolution movements in Scotland and Wales.[11]

During the 2010 World Cup, UK Prime Minister David Cameron told Parliament that the flag would fly above his official residence at "no extra cost to the tax payer" while England played in the contest.

Guernsey was permitted to use the St George's Cross as its state flag between 1936 and 1985.

The coat of arms of Montreal, first used in 1833, had a Saint Patrick's cross with the floral emblems of England, Scotland, Ireland, and France in its four quarters. The cross was changed to a Saint George's Cross in 1938, representing England's dominating influence over Canada, and a city flag in the form of the arms was adopted the following year. The city of Nanaimo in British Columbia also uses a Saint George's Cross on its flag and arms with a ship and pieces of coal, its former main export.

Three Canadian provinces use the Saint George's Cross on their coats of arms: Alberta, Manitoba, and Ontario, again reflecting England's influence in Canada. 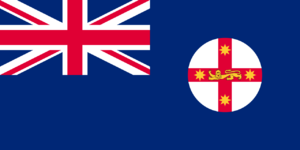 The Flag of New South Wales

The state badge of the Australian state of New South Wales features St. George's cross with a golden lion passant guardant in the centre of the cross and a golden eight pointed star on each of the cross limbs. 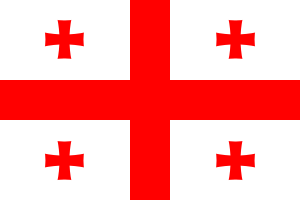 The flag of Georgia with St George cross in middle

St George is the patron saint of the nation of Georgia, and the St. George flag was supposedly used in the 5th century by Georgian king Vakhtang Gorgasali.[12][dubious – discuss] In the 13th century, Queen Tamar of Georgia used the St. George flag during her campaign against Seljuk Turks. The four Jerusalem crosses were later added by King George V of Georgia, who drove out the Mongols from Georgia in 1334. The flag fell out during the Russian annexation of Georgia and abolition of the Georgian monarchy. However, the flag was revived by the Georgian patriotic movement in the 1990s. A majority of Georgians supported the restoration of the medieval flag of Georgia, including the influential Catholicos-Patriarch of All Georgia Ilia II of the Georgian Orthodox Church. The flag was finally adopted by the Georgian parliament on January 14, 2004. It was formally endorsed by a presidential decree signed by Mikheil Saakashvili on January 25, following his election as President of Georgia. 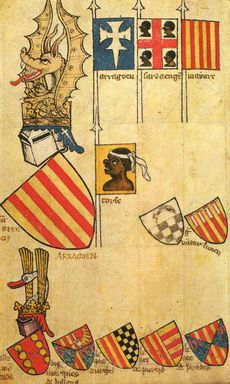 The flag of the Italian Region of Sardinia is popularly known as the Four Moors flag, and consists of a red cross on a white background with a maure (moor's head) in each quarter. The "four moors" design appears to date to the late 13th century, in origin associated with the Crown of Aragon.[13] It became associated with the Aragonese Kingdom of Sardinia during the 14th century (so in the late 14th century Gelre Armorial).