The building's construction crane was hit by a helicopter in January 2013, causing two deaths.[3]

The Tower's floor-plan design is based on the shape of a Catherine wheel and is typically divided into five apartments per floor with separating walls radiating out from the central core.[citation needed]

Sky gardens provide residents with a semi-external space stepped forward from the pure circular plan, creating steps in the façade that accentuate the building's height and provide variety and interest in the detailing of the otherwise minimal cladding.

The building is divided into three distinct parts – a base that houses the communal facilities of the building including a lobby, business lounge, gym, spa and swimming pool; a middle section containing most of the apartments; and an upper section where the façade reduces in diameter to provide 360° terraces and a wind turbine that tops the structure.

The wind turbine, manufactured by British green-technology company Matilda's Planet, powers the tower's common lighting, whilst creating virtually no noise or vibration.[4] At the base of the tower, water is drawn from the London Aquifer and heat-pump technology is used to remove warmth from the water in the winter to heat the apartments. In comparison to similar buildings, the tower requires one third of the energy, and produces between one-half and two-thirds of typical CO2 emissions. It is triple-glazed to minimise heat loss in winter and heat gain in summer, with low-e glazing and ventilated blinds between the glazing to further reduce heat gain from direct sunlight.

Special stairs for the luxury lower penthouse apartments are supplied. These apartments and stairs are a mirror of each other. In one of these apartments there is a 360-degree view across the whole of London. The highest swimming pool in London is located in this apartment.[5]

Following ongoing advice from the government architectural body, the Commission for Architecture and the Built Environment, two revised planning applications were submitted and subsequently withdrawn. A final decision was made by then Deputy Prime Minister John Prescott in April 2005, and the tower was approved, against the decision of the planning inspector and despite warnings from his own advisers that it “could set a precedent for the indiscriminate scattering of very tall buildings across London”.[6] This has been the subject of considerable controversy, owing to the tower's height and its proximity to the Palace of Westminster.[citation needed] 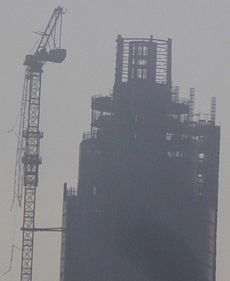 Damage to the crane jib following the accident

On 16 January 2013, at approximately 08:00 GMT, two people died when an AgustaWestland AW109 helicopter struck the construction crane attached to the near-complete building and then crashed onto Wandsworth Road, hitting two cars and igniting two nearby buildings. One of those killed was the helicopter pilot, who was flying alone; the other was a pedestrian. The crane was seriously damaged in the incident, but the crane operator was late for work, so was not in the cab as he would otherwise have been.[3][7][8]

In August 2014, the Tower was nominated and made the Building Design short-list for that year's Carbuncle Cup, which was ultimately awarded to Woolwich Central with St George Wharf Tower being named runner-up.[9]