St Giles-without-Cripplegate is a Church of England church in the City of London, located on Fore Street within the modern Barbican complex.[1] When built it stood without (that is, outside) the city wall, near the Cripplegate. The church is dedicated to St Giles, patron saint of beggars and cripples. It is one of the few medieval churches left in the City of London, having survived the Great Fire of 1666.[2]

There had been an initial Christian Saxon church on the site in the 11th century but by 1090 it had been replaced by a Roman Catholic Norman one. In 1394 it was rebuilt in the perpendicular gothic style.[3] The stone tower was added in 1682.

[1545] The xii day of September at iiii of cloke in the mornynge was sent Gylles church at Creppyl gatte burnyd, alle hole save the walles, stepull, belles and alle, and how it came God knoweth.

The church has been badly damaged by fire on three occasions: In 1545, in 1897[4] and during an air raid of the Blitz of the Second World War on the night of 24 August 1940.[5] German bombs completely gutted the church but it was restored using the plans of the reconstruction of 1545. A new ring of twelve bells was cast by Mears and Stainbank in 1954, and this was augmented with a sharp second bell cast in 2006 by the Whitechapel Bell Foundry.[6]

The church was designated a Grade I listed building on 4 January 1950.[7] 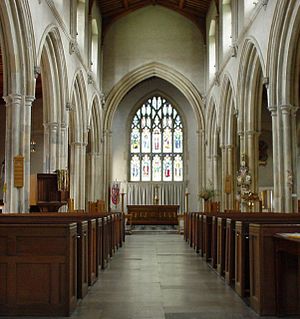 Layout of the church 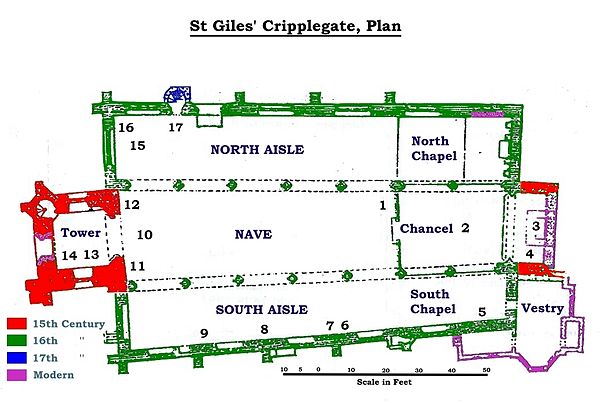