St Hilda's College is one of the constituent colleges of the University of Oxford in England. The college is named after the Anglo-Saxon Saint, Hilda of Whitby and was founded in 1893 as a hall for women; remaining an all-women's college until 2008.[3] The college now has almost equal numbers of men and women at both undergraduate and postgraduate level.

The current Principal is Sir Gordon Duff, who took up the post in 2014.

Founded in 1893, St Hilda's College was originally an Oxford Hall for women. It was founded by Dorothea Beale (who was also a headmistress at Cheltenham Ladies' College) as a women's college, a status it retained until 2008. Whilst other Oxford colleges gradually became co-educational, no serious debate at St Hilda's occurred until 1997, according to a former vice-principal, and then the debate solely applied to the issue of staff appointments.[5] After a vote on 7 June 2006 by the Governing Body,[3] men and women can be admitted as fellows and students. This vote was pushed through with a narrow margin and followed previous unsuccessful votes which were protested by students because of the "high-handed" manner in which they were held.[6] The change was met with some dismay from former alumnae and current students.[7]

In October 2007 a supplemental charter was granted and in 2008 male students were admitted to St Hilda's for the first time. The College now has almost equal numbers of men and women at both undergraduate and postgraduate level. In August 2015, the interim Norrington Table showed that 98.2 per cent of St Hilda's finalist undergraduates obtained at least a 2.i in their degree.[citation needed]

In 1969, the St. Hilda's Eight made Oxford history when they became the first ever female crew to row in the Summer Eights. They placed 12th.[8]

St Hilda's students were the subject of the Channel 4 documentary series College Girls, broadcast in 2002.[9] 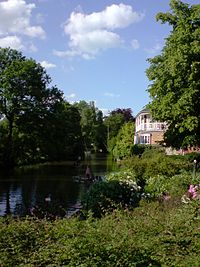 The college is located at the eastern end of the High Street, Oxford, over Magdalen Bridge, in Cowley Place, making it the only University of Oxford college lying east of the River Cherwell. Its grounds include six major buildings, which contain student accommodation, teaching areas, dining hall, the library and administration blocks: Hall, South, Milham Ford, Wolfson, Garden, and the Christina Barratt Building (opened in 2001). In addition, the Jacqueline Du Pré Music Building is a concert venue named after the famous cellist who was an honorary fellow of the college. The college also owns a number of properties on Iffley Road, and in the Cowley area. It is the most conveniently situated Oxford college for the Iffley Road Sports Complex, a focus for Oxford University Sport.

The college grounds stretch along the banks of the River Cherwell, with many college rooms overlooking the river and playing fields beyond. The college has its own fleet of punts, which students of the college may hire for free in summer months. Unfortunately, this location has at times led to problems with flooding in Milham Ford building. 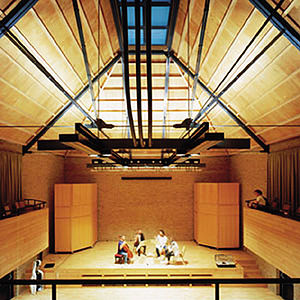 The Jacqueline Du Pré Music Building (JdP) is a part of St Hilda's College. Named after British cellist Jacqueline Du Pré, an honorary fellow of the College, the JdP was the first purpose-built concert hall to be built in Oxford since the Holywell Music Room in 1742. Built in 1995 by van Heyningen and Haward Architects, it houses the Steinway-equipped Edward Boyle Auditorium and a number of music practice rooms. In 2000 the architects designed a new, enlarged foyer space; a lean-to glass structure along the front elevation to the existing music building. In addition to frequent recitals presented by the St Hilda's Music Society, the JdP also hosts concerts by a number of world-renowned performers. Musicians who have performed in the JdP in recent years include Steven Isserlis, the Jerusalem Quartet, the Chilingirian Quartet and the Belcea Quartet. The building has also been used for amateur dramatic performances, since 2008 St Hilda's College Drama Society have been producing several plays a year in the Edward Boyle Auditorium.