From Infogalactic: the planetary knowledge core
Jump to: navigation, search
For the school in Tollerton, see St Hugh's College, Tollerton.

St Hugh's College is one of the constituent colleges of the University of Oxford. It is located on a 14.5 acres (59,000 m2) site on St Margaret's Road, to the North of the city centre.[2] It was founded in 1886 by Elizabeth Wordsworth as a women's college, and accepted its first male students in its centenary year in 1986.

It enjoys a reputation as one of the most attractive colleges because of its extensive, pleasant gardens.[3][4] In its 125th anniversary year, the college became a registered charity under the name 'The Principal and Fellows of St Hugh's College in the University of Oxford'.[5] As of July 2013, the college's financial endowment was £25.7 million.[6]

St Hugh's was founded in 1886 by Elizabeth Wordsworth (great-niece of the famous poet William Wordsworth) to help the growing number of women "who find the charges of the present Halls at Oxford and Cambridge (even the most moderate) beyond their means".[7] Using money left to her by her father, who had been Bishop of Lincoln, she established the college at 25 Norham Road in North Oxford.[8] She named the college after one of her father's 13th-century predecessors, Hugh of Avalon, who was canonised in 1220, and in whose diocese Oxford had been.

The college was initially accommodated in properties in Norham Road, Norham Gardens and Fyfield Road.[9] Its first six students were Annie Moberly, Jessie Annie Emmerson, Charlotte Jourdain, Constance E. Ashburner, Wilhemina J. de Lorna Mitchell and Grace J. Parsons.[10] Students were required to ask the Principal before accepting invitations to visit friends, and the college gates were locked at 9pm.[10] Records show that rent was between £18 and £21 a term depending on the size of the room, with fires being charged extra.[11]

The college began to move to its present site in 1913, when it purchased the lease of a house called 'The Mount' from the Rev Robert Hartley for £2,500. This house was situated on the corner of St Margaret's Road and Banbury Road, and was owned by University College.[9] The house was demolished to make way for the Main Building of the college, which was constructed between 1914 and 1916 thanks to a gift from Clara Evelyn Mordan; the college's new library was named Mordan Hall in her honour.[10] The first book was a copy of Sale's Koran, which was given to the college by the then Bishop of Tokyo.[12]

The college soon took over other properties nearby. The leasehold of No. 4 St Margaret's Road was acquired in 1919; it became the first 'College house'.[9] The leasehold of No. 82 Woodstock Road was donated to the college by Dr Joan Evans in 1924 and No. 89 Banbury Road was purchased from Lincoln College for £7,000 in 1927.[9] The college obtained the freehold to the main site in 1927 and a year later the first stage of the Mary Gray Allen building was constructed by building over the tennis courts.[9] The freeholds of Nos. 1-4 St Margaret's Road and 74-82 Woodstock Road were purchased from St John's College in 1931 and 1932 respectively.[9] The college received a Royal Charter in 1926.[13]

Between 1935 and 1936 No. 1 St Margaret's Road was demolished and a new library was built in the Mary Gray Allen building; it was named the Moberly Library after the first Principal of the College[9] (the library was extensively renovated between 1999 and 2000 and renamed the Howard Piper Library after a St Hugh's alumnus).

At the outbreak of the Second World War the college site was requisitioned by the military for use as the Hospital for Head Injuries under the directorship of Hugh Cairns, the Professor of Surgery at Nuffield College.[14] Brick huts were constructed in the college grounds with space for 300 beds. Between 1940 and 1945, over 13,000 servicemen and women were treated at the college.[14] Advances in medicine discovered at the hospital meant the mortality rate for brain-penetrating injuries fell from 90% to 9%.[14] Staff and students were relocated to Holywell Manor, Savile House and St Hilda's College for the duration of the war.[15]

In 1943 the college acquired the leasehold of No 72 Woodstock Road (known as The Shrubbery) from Dame Gertrude Whitehead for £1,500. It was used as a club for American soldiers during the war.[15] In 1946, it was leased to the University of Paris as 'Maison Française', an Anglo-American educational establishment. One of the cottages in the grounds of No 72 was later leased by Barbara Gwyer after her retirement as Principal.[15]

The college buildings were de-requisitioned in 1945. The hospital huts were initially leased as offices to university departments, including the Bureau of Animal Population, the Department of Zoological Field Studies and the Institute of Statistics, before being demolished in 1952.[15]

The 1960s saw an extensive program of building work at St Hugh's. The Shrubbery was converted into the Principal's Lodgings in 1963.[16] Between 1964 and 1965 the Kenyon Building was constructed to provide accommodation for students[16] (designed by modern architect David Roberts, the building has already been given a heritage listing).[17] This was followed shortly after by the Wolfson Building, which was constructed between 1966 and 1967 and opened by Princess Alexandra and Harold Macmillan in his role as Chancellor of the University.[16]

The Chapel was renovated in 1980; a new organ was installed.[16] The following year, Nos 78, 80 and 82 Woodstock Road were also renovated. The houses are now named SH Ho House, Ho Tim House and KK Leung House in recognition of the gifts from the three Hong Kong benefactors that funded the renovations.[16]

A new boathouse was constructed (jointly with St Anne's and Wadham Colleges) between 1989 and 1990. This was followed by the construction of the Rachel Trickett Building between 1991 and 1992 at a cost of £3.4 million.[12] 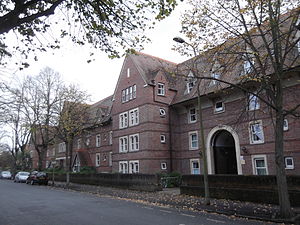 North side from St Margaret's Road

Between 1998 and 2000 the Maplethorpe Building was constructed; the building contains conference facilities on the ground floor and student accommodation on the upper three floors.[12] The building missed its planned opening date of summer 2000, meaning students had to be accommodated in B&Bs throughout Michaelmas term. In addition, a new main entrance was constructed at the back of the college on Canterbury Road.[12]

Between 1999 and 2000 the library was extensively renovated.[12] It was reopened by Betty Boothroyd and was renamed after Howard Piper, a Maths student of the college who died shortly after graduating. A major refurishment of Mordan Hall, the old library, took place in 2007.[12]

There are statues of both St Hugh and Elizabeth Wordsworth on the library stairs. These were presented to the college as gifts for its Jubilee in 1936. St Hugh carries a model of Lincoln Cathedral, which would have been very familiar to Elizabeth Wordsworth, and has his other hand resting on the head of a swan, probably the famous swan of Stow, although the swan is also a symbol of purity. Elizabeth Wordsworth is depicted wearing her doctoral robes.

St Hugh's College celebrated its 125th anniversary in 2011; a summer garden party was attended by over 1,200 guests.[18] Aung San Suu Kyi sent a message to the college, saying "Happy moments are one of the pillars that keep the spirit uplifted during hard times. St Hugh’s and Oxford are inextricable from my happiest memories, those that I could draw on when the beauty of the world seemed dim. I so wish I could be with you at this very moment to relive old joys and to stir up new ones for the future. I would like to thank all my friends for the happiness we shared. To the present students of St Hugh’s I would simply like to say: Make the most of your time in this wonderful place."[18]

In 2012 the college was sued for allegedly discriminating against the poor by requiring evidence of funds for living costs.[19] St Hugh's, which filed defence papers to the court, accepted barring the student on financial grounds, but claimed the measure was necessary to ensure students can complete their studies. The College eventually settled the claim, with the University promising to conduct a review of the Financial Guarantee policy.[20] In September 2013, it was revealed that the University had decided to abolish the Financial Guarantee policy and replace it with a less restrictive 'Financial Declaration'.[21]

In 2008, the college began a fundraising drive for a new building on the college site. In November 2010, it was confirmed that Hong Kong businessman Dickson Poon had made a £10 million donation to the college for the construction of the Dickson Poon China Centre. The Centre houses the university's China Studies department, as well as providing accommodation for St Hugh's postgraduate students.[2] The Dickson Poon building was opened by Prince William in September 2014.[22]

St Hugh’s occupies a rectangular site in North Oxford. It is bordered by Banbury Road to the east, Woodstock Road to the west, St Margaret’s Road to the north (the front entrance) and Canterbury Road to the south (the back gate). The gardens of the college cover about ten and a half acres.[23][24]

St Hugh's is unusual amongst Oxford colleges in guaranteeing undergraduates accommodation on-site for all years of their course.[25] There are a range of rooms and flats available which are decided by the room ballots organised by the JCR.[26]

The main entrance of the college leads straight to the Main Building, which usually accommodates first year students,[27] but also houses the chapel and the dining hall. Other first year students may be accommodated in the 1960s Kenyon Building,[27] named for Dame Kathleen Kenyon. Second years either live in the Rachel Trickett Building, named after a past principal of the college, or the Mary Gray Allen Building. Wolfson Building consists of nine staircases. Finalists usually live in the newer Maplethorpe Building,[4] whose rooms have en-suite facilities and clusters of eight rooms sharing a kitchen on each of the three floors, with four staircases altogether. All the rooms have views of gardens.

In its 125th anniversary year, the college became a registered charity under the name 'The Principal and Fellows of St Hugh's College in the University of Oxford'.[5] As of July 2013, the college's financial endowment was £25.7 million.[6] This was amongst the lowest of the Oxford colleges; by comparison, St John's college had a financial endowment of £313 million.[28] 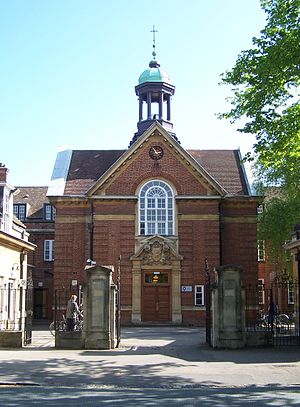 The front entrance of the college

The college is big enough to accommodate all its undergraduates and a large proportion of its postgraduates for the duration of their studies. There are three large lawns for the use of students all year round. The gardens are also the venue for croquet and ultimate frisbee. There are a wide range of clubs and societies - sporting, academic, and those supporting niche interests.

The JCR Committee at St. Hugh's is made up of 16 representatives.

Otherwise, 'JCR' refers to a literal room in the college that hosts social events and is generally seen as a place to relax.

St. Hugh's has a choir which sings weekly evensong on Sundays. The choir draws its members from all three common rooms, and has performed for a wide variety of different guests, ranging from the Jamaican High Commissioner to many bishops and archbishops.[citation needed]

The present organ was constructed by the Italian organ-builder Tamburini[29] in 1980. The college offers organ scholarships along with four choral exhibitions each year, and employs a professional organist to oversee the chapel music.[30]