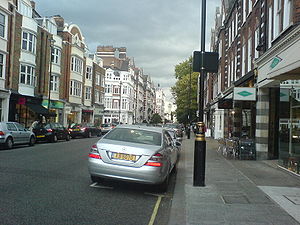 St John's Wood is a district of north-west London, in the City of Westminster, and on the north-west side of Regent's Park. It is about 2.5 miles (4 km) north-west of Charing Cross. Once part of the Great Middlesex Forest, it was later owned by the Knights of St John of Jerusalem.[1]

It is a very affluent neighbourhood,[2] with the area postcode (NW8) ranked by Forbes magazine as the 5th most expensive postcode in London based on the average home price in 2007.[3] According to a 2014 property agent survey, St. John's Wood residents pay the highest average rent in all of London.[4]

In 2013, the price of housing in St John's Wood reached exceptional levels. Avenue Road had more than 10 large mansions/villas for sale. The most expensive had an asking price of £65 million, with the cheapest at £15 million. The remainder were around £25 million. 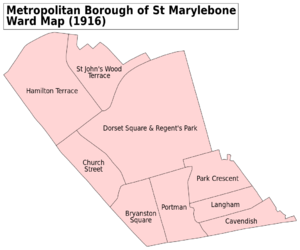 A map showing the St John's Wood ward of St Marylebone Metropolitan Borough as it appeared in 1916.

St John's Wood was developed from the early 19th century onwards. It was one of the first London suburbs to be developed with a large amount of low density "villa" housing, as opposed to the terraced housing which was the norm in London up to the 19th century, even in expensive districts. Parts of St John's Wood have been rebuilt at a higher density,[5] but it remains a highly desirable residential district, and one of the most expensive areas of London.[6]

St John's Wood is the location of Lord's Cricket Ground, home of Middlesex County Cricket Club and of the Marylebone Cricket Club (MCC), and the original headquarters of cricket. It is also famous for Abbey Road Studios and the street Abbey Road, where The Beatles recorded, notably the Abbey Road album, the cover of which features the band crossing the road.

The King's Troop, Royal Horse Artillery was formerly based at St John's Wood Barracks. The regiment moved to Woolwich on 6 February 2012; the barracks is to be demolished and developed as housing.[7]

The area is also home to St. John's Wood Church Grounds, which contains the only nature reserve in the City of Westminster.

For education in St John's Wood, see List of schools in the City of Westminster.

The area has various schools:

St John's Wood has a range of places of worship.